You probably think you are perusing this writing to learn more about star races.  Yet, reading these words begins your path towards a new reality. As the Matrix film stressed, “I know why you're here... I know what you’ve been doing... why you hardly sleep, why you live alone and why night after night, you sit by your computer. You're looking… I know because I was once looking for the same thing.” You are seeking your origins in the skies above: this is your quest. You are upon an adventurous intergalactic quest to find reflections of your innermost “self” -- patterns to identify with -- fractals which mirror you to your real Starseed family.


Your Starseed relatives -- within the ships -- are attempting to talk with you now.  They are trying all means of communication available. They approach you through dreams, visual signs, plus you may sense them physically of feel their ever-persistent presence in the psychic realms. Are you listening? Are you feeling? Are you sensing?  As it vocalized in the Matrix, “I can see it in your eyes. You have the look of [one] expecting to wake up.”


“Have you ever had a dream...that you were so sure was real? What if you were unable to wake from that dream? How would you know the difference between the dream world and the real world?” intoned the Matrix, challenging us all to awaken now. While you believe you are sleeping, you are -- in fact -- *on assignment* on your ship above.  You are now attending ship-side schools related to your skill-set and Starseed race.  Fundamentally, you're being *reprogrammed* for a brighter intergalactic future every night.


As it was emitted in the Matrix, “I'm trying to free your mind...But I can only show you the door. You're the one that has to walk through it.” Many factors and tests have decided your upcoming roles and jobs -– in the very near future -– in these primary arenas:

- Acting as a Liaison between Humans and many other Star Races;
- Returning to your home planet for rest and reunions;
- Performing  within a committee and/or labor job;
- Negotiating within a liaison / alliance, or;
- Working for the Galactic Federation.


All of these posts involve living on a ship, if only for a short time. This calls for traveling to a different planet within another galaxy -- or to an alternative dimensional reality such as a parallel universe -- or to even to a higher frequency of expression.


While you are co-habitating within a starship, flagship or lightship, you will be interacting with those from across the Cosmos! They will not be comparable to anything you’ve seen, felt, or perceived with your current reality veils (in this incarnation thus far).


Since you are now experiencing dimensional shifts leading to *life aboard the ships with your star race family* it is crucial to be as open-minded and open-hearted as possible: there are infinite prisms of kindness and utility that can be found within each planetary civilization.


Your Starseed relatives cannot *yet* be understood from your current vantage point, but will be holistically perceivable during your ecstatic love-filled multidimensional Starseed reunion.


You will be surrounded by non-human *family* on these ships (and your appearance will most definitely reflect theirs in your future). What will they look like? What will they be like? Here are some basic essential traits of just a few of the planetary star races you will relate with very soon:


Andromedans:
1) The 7D, 8D and 9D humanoid group-thinkers from the Andromedan Star System, or; 2) term identifying the race of sentient service-to-other beings occupying the livable planets such as Aion in the Andromeda sector, as well as; 3) Sentients known for perfecting co-creation for peacefully-running planets and star bases.


Arcturians:
1) Both 6D and 7D Sentient service-to-other beings occupying the livable planets and bases in the area of the star Arcturus, and; 2) Some Arcturians are humanoid, and others resemble Earthshan horses, plus; 2) These individuals are known by their deep compassion and unfailing kindness towards all walks of life in all dimensions.


Lyrans:
1) Felines -- the original progenitor race of  this Universe -- who are beautiful bipedal (standing) cats, and; 2) 6D through 12D Creators originally from the Vegan Star System of a planet called Lyra, but now live everywhere in the Universe, and; 3) Planners of many flagships and living planets, plus; 4) Cat-Beings who have a keen sense of fair play in all arenas, plus; 5) Sentients who believe that their young have more wisdom than elders.


Orion Beings:
1) 4D and 5D polymorphs who are either chameleon-reptilian or humanoid-reptilian hybrids, and; 2) Beings from the Orion System – also called the Orion Nebula – whom reside upon planets and space stations throughout the Universe, and; 3) Individuals and soul-collectives from Orion who have tendencies towards high intellectual pursuits in physics, plus; 4) Sentients whose self-ascension practices are linked to extreme isolation, as well as; 5) Beings well-known for the utter perfection of holographic recreation of other star races' emvironments.


Pleiadians:
1) 5D and 6D humanoids as well as reptilian-humanoid hybrids (in gorgeous prismatic skin colors) from the planets surrounding the stars Targeta and Maia; 2) Soul-collective service-to-others beings who are artistic and sensual in nature, plus; 3)  Beings who are masters of storytelling as well as inspired artistic ingenuity in
both music and projected visualizations.


Sirians from Sirius A:
1) 6D - 8D hybrids with a variety of humanoid, canine, and fox-like appearances resulting from tremendous dna manipulation, as well as; 2) Star races who are experts in bodily implant-device-tracking over eons of time, plus; 3) Beings well-versed in hyper-advanced bio-technology and organic holographic realities, and; 4) Sentients who are well-known across the Universe for their senses of humor, and their love of practical jokes.


Sirians from Sirius B:
1) Nektons of hyper-intelligent water beings -- called Chloglians, who look  like Cetaceans (dolphins, whales, and orcas) of Earthshan -- whom group-think within pods, and; 2) Chloglian-humanoid hybrids, who are bipedal in shades of pale blues and greens, and; 3) Higher dimensional Sentients who reside in and upon many planets to raise vibrations, plus;  4) Playful and loving group-consciousness
beings, known for their intricate songs, and also; 5) Advanced Beings who can live as numerous souls (called a pod) within one biological entity, such as a whale or orca.


Now that you have some depictions of some of your biological star race relatives, spend some time each day communicating with them -- until you have a constant rapport -- so you can quickly ascend upward beyond the mundane.

As it questioned in the Matrix, “What is real? How do you define real? If you're talking about what you can feel, what you can smell, what you can taste and see, and then real is simply electrical signals interpreted by your brain.” Multidimensional life with your Starseed relatives is multi-layered, and must be cultivated by **you** making an effort to be alert to all subtleties.


It is the time to discipline yourself to be silent and aware of every nuance through waking hours of hearing (e.g.; you hear songs about specific constellations, star beings, etc.). Also it is vital to be hyper-aware of what you’re seeing (i.e.; you notice paintings of aliens, observing lightships everywhere, seeing number sequences indicating names of universes). Focus all of your six senses on receiving signals from your future’s new realities.


Force your inner “Self” to wake up! Attempt to be lucid while your projected Earthshan body sleeps: talk to whomever you meet in dreams, as they just might be your relatives in the ships above.


In the near future -- the upcoming articles will cover electrifying intergalactic chronicles, including: future home planets, Starseed missions, how to interact with non-organic life forms, and more!  Meanwhile, WAKE UP -- shake others awake -- and remember that you are not *Home* yet…


“Lightworker 303: Starseed Beam Me Up - Begin Ship Assignments”
(Coming in the next couple of months or so…from your *Wake Up Crew*
aboard the SS Phoenix)

written by J’Tariah EnRa El of the Starship Phoenix
http://starseed.yolasite.com/ 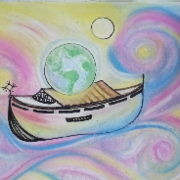