In a Nutshell, Why I Focus on Exposing Obama On This Website, Rather Than Other, Equally Dubious Politicians

"This Man has absolutely no shame... He has been caught a number of times lying ... HE IS S SHAMELESS CREATURE ...cannot be human as a human being would have been ashamed and resigned"

The UK is run by liars and crooks, also, that much is true...The difference is, you won't find any fake new age channels massively and energetically promoting David Cameron, on new age websites....Ask yourself why this Obama fraud, among many others, is constantly being promoted by the likes of Trutwin and Quinsey...?? Why is a liar presented as a messiah...??

It's obvious that the Dark Cabal feel that they have a better chance of convincing you to believe in Saint Obama, than a Saint Cameron, or Bush...And thus, you can be baited offtrack into a false vision of their choosing...which means up a cul de sac.

They have created an artificial "Mandela complex" around Obama, that would never have worked with any UK politician......Especially our aloof and cold Etonians.

So now you know why we stick on the Obama case and tear that curtain down, with gusto......I also expose Obama because he presides over the heaviest clampdown on civil liberties in US history, as well as the murderous Drone Wars...

So, every time a spurious "channel" posts a message on ACC, about Obama coming to the rescue, or Obama announcing ET, or announcing NESARA....I often counter such disinfo and will keep pointing out the fraud, as rapidly as they create them....

I look upon this work as a challenge to CIA Psyops and their flying circus of Obamanoid fanatics..

I hope this explains why I generally don't expose David Cameron and George Osborne, who are truly worthless as propaganda material, for the Cabal to utilise on the public, as they fool nobody...Their role is as unpopular functionaries delivering mass austerity, rather than as pawns for psychological warfare...The same goes for Hollande of France. Keep on Keepin' on -we use to say in the 70's- expose the bama fraud Drexx for what it is -a front man for the far left agenda which includes a complete takeover of the organs of gov and especially the propaganda wing-group think for collectivism, forced collectivism, using propaganda, fear tactics as in these illegal searches being tested around the states, political correctness, etc. herd us in a direction the loonie left thinks we should be-which is if they could have it all we'd be living in thatched villages -what they don't realize, I beleive, is they themselves are being used by dark spirits in the shadow realms to herd us around to be used as energetic food, create havoc and discord and feed-this is old fashioned but if you simply deny the existence of the Universal Father/Mother in your mind and actions you become a tool for wicked spirits who have don the same. Make a deal with lucifer's office, get power over others, gifts of power like the bama forked tounge that twangs the heart strings, 300 myears of mutiple lives in 3d and below in one of the hell realms or shadow worlds and then one day the payment comes due and said person is engulfed in a fireball or hacked to pieces or eaten by a shark etc.-(I know fire and brimstone)

Permalink Reply by Krishna Kalki on December 8, 2013 at 12:12am
Most people are under the impression that America is a super power and the most powerful country in the World ..most people think that the President of America is the most powerful man in the World ... behind what ever power they have is a different story. ... The leaders and Governments are corrupt to the very core .. this also applies to other countries.
America and Obama is in the news a lot and some consider him to be a messiah, a saviour comparing him to Jesus and some think he is a STARSEED but he has fooled them all as really he is a bloody liar and a liar should not be paid to stay in the Whitehouse nor to be a leader .
This is why we are trying to wake up America before much more damage is done.
Note: a true STARSEED, a true messiah and a true saviour DOES NOT TELL LIES ... BUT A FAKE FALSE ONE DOES 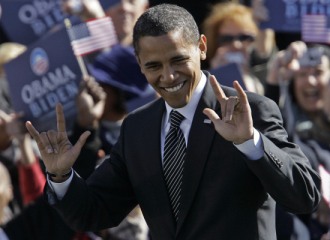 +1 there stick. To me, I think the word GOVT in itself is against any persons freedom. Nobody in any office anywhere on the planet has any agenda to leave humanity alone and let them live. The only thing they should govern is universal/common sense laws against nature. But that should be governed by all of humanity...but all politicians have a nit-picking nanny complex.

Hello friends and fellow ACC members.....thanks for your interest in this subject, which I wanted to clarify....

I'm based in the UK, so never got the chance to vote in US "elections," but like most non-US people around the world, we are stuck with an Amerikan President, good or bad...It effects all our lives, so the matter is of concern to us...

I didn't think this forum would get to number one spotlight, but it's obviously popular enough to do so...The topic is important and frankly I wish I'd never heard of Obama, but we're stuck with him until new governance can be implemented under a restored US constitution and the Federal Reserve system totally abolished...

The world is suffering and crying out for real change....It is coming...

What no one understands is that voting does not matter in the slightest. Electoral votes decide who is elected, which in turn cancels out 100% of the citizen votes. Voting is an illusion that no one can see (which is beyond me of why), but yet it is publicly spoken about even during the MSM coverage of it. On top of that, the 5-6 candidates running are chosen for you to begin with. So the whole illusion is totally out there to see.

In any country it's totally impossible to chose any common man with pure common sense to help govern anything. Even in your local tiny town where you can vote in board members that are possibly family friends, even they are subject to "fed govt" laws when they wire in their govt guideline rules pertaining to what matters to the elite...as in new guidelines for the local police....that have zero to do with the fed.

I actually know for a fact about things that local police are forced to comply (most have notes on the bottom that instructs to keep secret). Cops quit all the time because even in small towns they can't take all of the political BS that is constantly bombarding every aspect/subject in any given US city/town....and all unconstitutional.

In the end, no matter who is in office, you can bet your life that whomever is in that chair has no regard for what the normal man would want....let alone what is good for them.

Yep you continue to flog that dead horse my friend..

Dont you ever get tired of that burden..

Obama is of the light Galactic in origin..

When read back in time you words will seem foolhardy..

My advice is step away from this illusion..

Put down your anger and just be my friend..

When all is known understanding you will have..

It's pretty hard to find a U.S. president who wasn't a liar or dishonest. Eisenhower lied about true U.S. motives in Central America (look up United Fruit Company and worker treatment) and JFK was elected president via dead or non-existing persons voting for him in Illinois and West Virginia (and allowed his supporters to suppress this information. Look up mafia boss Sam Giancana and JFK).

It's good that people are exposing the lies of the current president. But I personally think the real issue and question to ask is that despite the lies, is the president creating policies and building a better country for the citizens that put him into the power? I think it's obvious that he hasn't, in lieu of addressing the U.S. national debt of  $17,000,000,000,000.00 with a call for increasing the debt ceiling (instead of ways to pay it off), a medical plan called the "Affordable Care Act" that has a huge majority of insurance policy holders claiming huge increases in their health care insurance payments, a U.S. military that has the highest suicide rate in history (with a majority of these military suicides prescribed antidepressants), and a record disapproval rating of the president from the voters at large that currently surpasses Nixon's disapproval rating.

I think it's time for the president to admit that he has hurt the voters due to being an excessive liar and a lousy bullsh!t specialist, and either resign or face going to jail. He is starting to look more and more like a dictator, and this is evident as more and more people are talking the "i" word (impeachment).

And no, I don't think that the Dow Jones Industrial Average surpassing all time highs defines that things are getting better in the U.S., as this is a composite index of 30 large companies selected by statisticians working for Dow Jones and Company (with some of these companies are exempt from requiring to pay for insurance for its employees under the "Affordable" Care Act, such as General Electric and McDonalds. Both of these companies reportedly were huge financial contributors to politicians who voted for the Affordable Care Act: remember what J.D. Rockefeller said: "competition is a sin" ).

Now in 2020 we have OBAMAGATE, demonstrating my correct heart logic/intuition, about the veracity of the Obama fraud, years ago....

Remember how Steve Beckow and Mike Quincy used to promote his 'holyness, Saint Barry,' back in 2013...?? NOT ANY MORE WILL BARRY FOOL THE FOOLISH>>>>>>FUTURE PROVES PAST

sandra replied to the discussion 'WARNING ..Important Message From Extraterrestrials...SAY NO TO TEMPERATURE MEASURING GUNS AND NO TO MASKS'
"The 5G thing is part of the so-called Blue Beam Project that belongs to Iluminati.As long as we…"
1 hour ago

This is a group to help each other with our healing, spiritual growth & ascension by sharing…See More
3 hours ago
148 Comments 5 Likes

Dr. SohiniBen Shukla commented on the blog post 'THE FEDERATION OF LIGHT TALKS ABOUT THE PILLAR OF LIGHT IN NYC, through BLOSSOM GOODCHILD'
"Dear amparo, This is somethig unusual... But I think is a good sign. Sohini"
3 hours ago

Dr. SohiniBen Shukla liked amparo alvarez's blog post THE FEDERATION OF LIGHT TALKS ABOUT THE PILLAR OF LIGHT IN NYC, through BLOSSOM GOODCHILD
3 hours ago