Though I don't agree that climate change is man made(the atmosphere is 11 trillion tons of gasses!!! and over 600 miles high) but climate change is happening, and has always happened-earth has had several ice ages including a mini one in the middle ages- 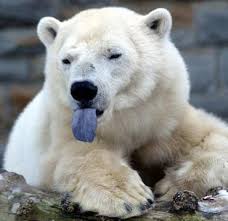 While the effects of climate change have been felt in different ways around the globe, the polar regions have been subject to outright changes to their respective topographies, as ice acts as a major feature of their landscapes. Scientists are concerned about the impact of these changes on Arctic wildlife, particularly ones that have adapted to depend on ice formations for survival, such as the polar bear.

One effect of the southward push of the habitat of the polar bear is that they are cross-breeding with grizzly bears, producing a hybrid called "pizzly bears". While encounters with the hybrid pizzly have been documented in the past, there are increasing reports of sightings of these odd ursids.

Monterey Bay Aquarium scientist Brendan Kelly has been tracking the re-emergence of the pizzly bear, and is concerned about the implications this development has on the issue of biodiversity. "Starting in 2006 I believe, people started encountering hybrids in the wild, and several have been harvested, including one that was second generation hybrid. It’s raised a real question — what will be the impact genetically of this rapid change in Arctic environments?” Kelly has also been studying other animals, including ringed seals, who's ice dens are now often at risk of premature melting, exposing immature pups to predators and the elements.

George Divoky, director of Friends of Cooper Island, has studied the guillemot sea bird for forty years. “I studied black guillemots — a sea bird on Cooper Island — for 28 years, seeing no major climate change, and since 2003 have seen rapid changes occur, as well as [changes] in snow and ice cover. Snow used to cover the island up until mid-June. This past spring snow melted from the island in close to mid-May. Ice used to be right next to the island and provide food for the chicks that were being fed on the island — there’s a fish that is under the ice that the parents feed on. The ice now pulls off shore hundreds of miles and chicks starve every year now, so I’ve seen rapid climate change occur and happen to have 28 years of pre-data to show how the change is occurring.”

Susanna Antonyi commented on the blog post 'THE GREAT SAMHAIN GATEWAY 2020 through MAGENTA PIXIE & ACTION PLUS INTENTION EQUALS COHESION'
"Fantastic message, thank you very much! We will have a little ceremony here in Malmö, Sweden,…"
58 minutes ago

By Clarissa Pinkola EstesDo not lose heart. We were made for these times. I have heard from so many…See More
10 hours ago
0 Comments 1 Like