I remember our solar system being on the edge of one of the Milky Ways' spiral arms-Sagittarius--now we are much closer to the galactic center!!!

HOW CAN WE STILL SEE THE ORION CONSTELLATION?

'It is also referred to by its full name, the Orion–Cygnus Arm, as well as Local Arm,Orion Bridge, and formerly, the Local Spur and Orion Spur. The Orion Arm is named for the Orion constellation, which is one of the most prominent constellations of Northern Hemisphere winter (Southern Hemisphere summer).'

Is our solar system shifting to the Orion Spur? lol or is this AI going haywire? Or stupid people listing the wrong info?

'Where is the Earth in the Milky Way galaxy?

Q how many light years across is the milky way galaxy;

Question;where is our sun in the milky way;

'It's between the Sagittarius and Perseus Arms of the Milky Way. The image below shows it. Our sun is located the Orion Arm, or Orion Spur, of the Milky Way galaxy. It's a minor spiral arm, located between two other arms.May 20, 2014'

'As we are part of the solar system Earth pretty much follows the path of the sun as it goes through its own orbit around the galaxy. The Milky Way is a spiral galaxy type so it has arms sort of like an octopus. The Sun is located near the outward tip of the Sagittarius arm of the Milky Way.'

This image is from 1997 and shows our solar system on Sagittarius; Very interesting. All the more so because John Lash, who is spearheading an investigation into the phenomenon of the Mandela Effect has spoken about this at lenght and his conclusion is that it (Mandela Effect) was sparked by the Earth itself, as a means to covey a message to awakened members of the human species, that they may never be psyop'd ever again. Now, John Lash relays ancient Gnostic Intel, and has gone into great detail in his talks about how the Earth, or the Aeon Sophia who morphed into the Earth after the impact of her plunge from the Galactic Core, is now making it's way back to the center of the Galaxy, and is on course to return to the exact center point of the Galaxy, albeit slowly, it is a slow boat to China. It does not surprise me that the current position of the Earth is where it is, no longer on the outskirts of the Galactic limbs but dead in the middle of the Orion arm, or third spiral limb. So far, I can't find a better explanation as to the source of the Mandela Effect and why it's occuring, there are just too many baffling examples that must make it a supernatural event, or, as John Lash describes it as, a super learning event.

way cool!  This is actually about a year old but then you could find a lot more drawings with earth at Sagittarius, science web sites showed the old location but now they are showing the new location -does anyone know if our constellations are in different  locations?

I will read about the orion syndicate-thanks

Is there any link to the Annunaki or Reptilians and Draco factions that also sometimes  are mentioned to the Orion group?  I find all of this very interesting nice food for thought.

HERE'S MY PROBLEM WITH THIS. The ancient Egyptians do acknowledge the importance of Orion's Belt. The three stars that make up this belt will line up exactly with the three pyramids in Egypt in 2050 (which will be the time frame for when the Age of Aquarius begins by my calculation).

BUT ALL OF THESE STARS IN ORION ARE 700+ LIGHT YEARS AWAY!!

I do agree that Orion and our solar system are a part of the "arm" of our galaxy that moves around the galactic center. But keep in mind that the Sirius star system is 8.6 light years from Earth, and was defined as "the axis of the universe" by the ancient Egyptians. Hence, if any star system is a candidate to be called as a part of our solar system, I think Sirius wins out with this interpretation. Below is Sirius A and B: 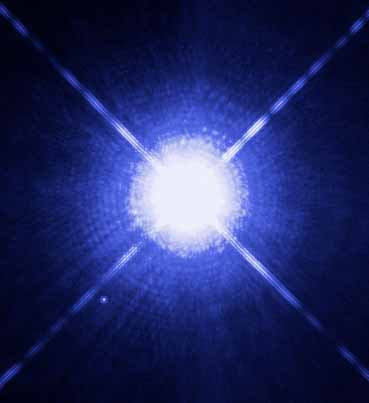 Sirius may also have an alien race that is beneficial to us in terms of spirituality and peaceful resolutions. This is unlike the  probable alien races from the Orion belt system  (i.e. reptilians, greys), as these races may be dazzling the U.S. military industrial simplex  with genetic experiments and weapons of war, much like Europeans did with New York Native American Indians via presentation of mirrors and glass beads (in exchange for New York property).

I EQUATE NASA WITH THE U.S. GOVERNMENT.

HENCE I DON'T BELIEVE ANYTHING THEY HAVE TO SAY.

PLEASE ALSO KEEP IN MIND THAT IF YOU WORK FOR NASA AND SHOW PHOTOS OF ET SPACE CRAFT OR ANY ET RACES ENCOUNTERED, YOU ARE FIRED ON THE SPOT AND YOUR NASA REFERENCE WILL READ "individual was terminated from work because he/she believes in little green men who live on Mars." heres the problem -many people believe our solar system is or was in Sagittarius out the outer tip and not in the orion spur or belt, the pic from 1997 shows it-thats about 25000 light years difference-so what you are saying is we are not and never were in Sagittarius-also nasa agrees with you and says we are part of the orion system

I get it-but this is a huge change-cant be discounted -25000 light year difference in calculation?

The Plans of the Central Bank. Important!

Krishna Kalki replied to the discussion 'A Message For All Humanity ..UNITE AND FIGHT FOR RIGHTNESS AND FREEDOM...END CORRUPTION'
"Firstly you should all know by now the government's are corrupt to the very core ..your…"
yesterday