I came to a massive realisation last night about the world and how it works.

We all know that the world around us is a projection of who we are on the inside I think most of us can safely say. But we all have shadows to tame, some religions can call this the serpent as depicted in the below artwork of Archangel Michael taming the serpent. 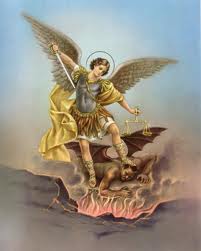 Just like us humans have shadows, so too does the Earth.  This Earth shadow is a reflection of our connected consciousness and it is something we, as humanity are responsible for and have to work together to tame.  The only way we can do this is to come to a realization that we are in fact the cause.  There are terrible things happening in the world right now and they are due to get worse. The only way we can tame this shadow is not by going to war with it, not judging the individuals igniting it, not matching like for like, but by being open and honest with ourselves. We are all one.  We all have the capability to rape, kill, harm another and however terrible this is, that is just an aspect of who we are and something we need to learn to come to terms with and not be offended by.  I'm not saying that everyone should stop caring and go out and kill...not at all!! I'm saying that we look at situations like a mother would look at her children...for example, if a man has committed rape we can look at this in two ways, 1. he is a vile and heartless being that should be killed or subject to the same thing, or 2. What must have happened to this man for him to feel so lonely and empty and lost inside that he would commit such a terrible act? This is a difficult thing to understand as of course we would immediately have compassion for the victim but I believe until we start to look at eachothers flaws as reasons to embrace and heal an individual or help eachother to grow, this shadow of the Earth will continue.  The killings will continue and destruction of the planet will be the result. If you fight in order to resolve an issue, you only double that issue.  This is simple mathematics!

So societies like Illuminati, although they seem very bad and they do bad things, they are actually working for God in order to help us to come to the realization that there truly is no such thing as good and evil.  We are all God collectively and need to stop segregating ourselves from one another. Stop judging others.  Because the things you hate about others are the parts of you that you fail to embrace about yourself.  The worst thing you can do with an emotion that you dislike and dont want to associate is to try and fight it, instead why not try to have empathy and think about why that part of you would feel like that.  Obviously something is lacking that needs fixing and soothing like when a mother picks up a child and cradles them if they fall.

There is a video about Nicki Minaj on youtube and she is talking about the demon she has abiding within her. The interviewer asks her why she thinks the demon is there and Nicki's reply is that the people have conjured him up and he wont leave until his work is done. Nicki is not a bad person, she is a fulfilled soul who has come to the correct realization and God has now placed in her part of the shadow (a demonic spirit) in order to teach the people of the world a lesson.  This is the case with many celebrities in the public eye acting up.  Their souls have been replaced with demons willingly in order to represent the shadow of Earth and they have been conjured up by us!!!! We are putting them through internal torment while their alters are inflicting external torment on the world who have placed them there in the first place.

It is time we grew up spiritually and stopped behaving like children. Once these blockages are soothed we leave ourselves open to give and also to recieve more love from God and to reach true enlightenment!!

"The sheer volume of wild stories coming out of Ukraine, at present, is off the charts..."Ascension & Awakening" is your supposed category, but maybe find another one named; "Tomfoolery."
And why is this mythical craft an "ark...?" And have you ever…"

The space ark is buried under Oleshky Sands National Nature Park, Ukraine’s national park which is 25 km (15 miles) east of Kherson. The park is highly unusual in that it is a semi-arid, desert-like area covered with low-fertility soil and sand.  …
See More

SGAnon did another great interview on November 27 with a group of patriots who appreciate and admire him very much. Part 1 was great, and Part 2 even better and it included a Q&A. These are some military veteran/spec ops/ type of fellows and as…
See More
More…
Loading ...