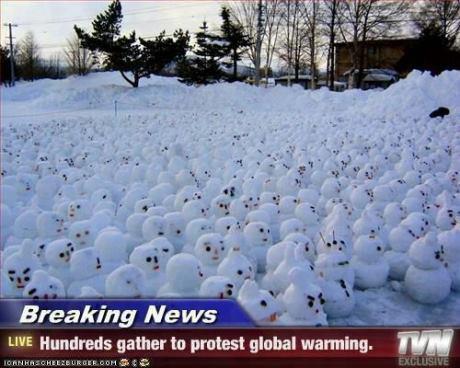 Top scientists have a better idea of how global warming will shape the 21st century: In a new report, they predict sea levels will be much higher than previously thought and pinpoint how dangerously hot it's likely to get.

In its most strongly worded report yet, an international climate panel said it was more confident than ever that global warming is a man-made problem and likely to get worse. The report was welcomed by the Obama administration and environmental advocates who said it made a strong and urgent case for government action, while skeptics scoffed at it.

"There is something in this report to worry everyone," said Chris Field, a Carnegie Institution scientist who is a leader of the Intergovernmental Panel on Climate Change but wasn't involved in the report released Friday.

Without any substantial changes, he said the world is now on track for summers at the end of the century that are hotter than current records, sea levels that are much higher, deluges that are stronger and more severe droughts.

The Nobel Prize-winning panel's report called the warming of the planet since 1950 "unequivocal" and "unprecedented" and blamed increases in heat-trapping greenhouse gases such as carbon dioxide from the burning of coal, oil and gas.

The United Nations created the panel of climate researchers in 1990 to tell world leaders what science is saying about global warming and how bad it will get. This is the group's fifth major state-of-the-science report, approved by nearly 200 nations at the end of a week long meeting in Stockholm.

In its last massive report in 2007, the panel said it was "very likely" — or 90 percent certain — that global warming was due to human activity, particularly carbon dioxide from things like coal-burning power plants and car exhaust. The new report moves that to 95 percent or "extremely likely."

The panel also fine-tuned its predictions for temperature changes and sea levels by the end of this century. Their worst case scenario previously put sea levels increase at just shy of 2 feet (59 centimeters) by 2100; now they put it at slightly more than 3 feet (1 meter). They cite better understanding of how much glaciers and ice sheets are melting and how water expands as it warms.

Unless the world drastically cuts emissions — an event scientists called highly unlikely to happen — the panel said Earth will warm by at least 2 more degrees Fahrenheit (1.1 degrees Celsius) this century in all but one of the four scenarios they outline.

That 2-degree threshold is "where the risks start piling up," including food crises in developing countries, people forced to move from coastal cities because of rising seas and more extinctions, said Princeton University climate scientist Michael Oppenheimer, a co-author of an upcoming IPCC report on impacts of climate change. "This is a point where any sensible person would look and say the risks are just getting too high."

One of those IPCC emission scenarios — the one that scientists say is closest to what is now happening and has no projected reduction in pollution — has Earth hitting the 2 degree mark by mid-century.

In that scenario, it's likely that the Arctic will have summers that are essentially ice free by mid-century and spring snow in North America would shrink by one quarter.

"If this isn't an alarm bell, then I don't know what one is. If ever there were an issue that demanded greater cooperation, partnership, and committed diplomacy, this is it," said U.S. Secretary of State John Kerry in a statement.

One of the most contentious issues was how to deal in the report with what appears to be a slowdown in warming based on temperature data for the past 15 years. Climate skeptics say this "hiatus" casts doubt on the scientific consensus on climate change, even though the past decade was the warmest on record.

Many governments had objections over how the issue was treated in earlier drafts and some had called for it to be deleted altogether.

In the end, the IPCC made only a brief mention of the issue in Friday's summary for policymakers, stressing that short-term records are sensitive to natural variability and don't in general reflect long-term trends.

The report did acknowledge that the climate may be less sensitive to carbon dioxide emissions than was stated in 2007.

The full 2,000-page report isn't going to be released until Monday.

The IPCC assessments are important because they form the scientific basis of U.N. negotiations on a new climate deal for cutting emissions. Governments are supposed to finish that agreement in 2015, but it's unclear whether they will commit to the cuts that scientists say are need to avoid the worst effects of climate change.

The report presented four scenarios with different emissions controls. In the best possible case, with strict pollution controls, temperatures could only rise by as little as half a degree Fahrenheit (0.3 degrees Celsius) by 2100. The middle scenarios show increases in the 3 to 4 degree range F (2 degrees C). The worst case is somewhere between 5 and nearly 9 degrees F (2.6 degrees to 4.8 degrees C).

In the past, the world has spewed more greenhouse gases than even the amounts used to calculate the worst-case pathway in earlier reports.

Scientists said the latest versions of the scenarios show there is hope, albeit faint, that the worst of climate change can be avoided.

"We presented four possible futures," said climate scientist Jerry Meehl of the U.S. National Center for Atmospheric Research. "It's up to the governments to decide which future we embark upon. We can achieve a low climate change future. It is possible. In theory."

Karl Ritter can be reached on https://twitter.com/karl—ritter

Seth Borenstein can be followed at http://twitter.com/borenbears

We are witnessing chaos, hate and confusion in the United States and all over the world right now.…