Andronover, Trump wouldn't know what a Christed Being is, let alone a "fully" Christed being. I wonder if you can provide any proof that Ronald Mac Donald is a "fully Christed being" as you claim him too be? Proove it Andronover!

No need to even try. Donald Trump being a Christed being is as real as Kim Kardashian's a$$. Bottom line, the only difference is that Kims a$$ used to be real at one stage, it was real before she got a bicycle pump and blew her butt cheeks up like two balloons, whereas Donald never was and is not a Christed being. They do both however, share a common bond, in that they are both fake a$$ reality stars! "Yep, a fully Christed being..." Alrighty then, Andronover. Before I waste energy spelling out the traits of a fully 'Cristed'/Enlightened, being... let me first try to get some clarity about the lens you're viewing 'reality' through. It ties back to a question that you never answered in a previous thread... a more than fair inquiry given some of the racially charged rhetoric you've posted on this site. Ready? Was Hitler a fully Christed being?

@Stick - not what I know , but I do know that most of what is written in historybooks are not true , and that includes Hitler.

I suggest that you read the Journals from Hatonn - look at KK:s post where I have provided a link. 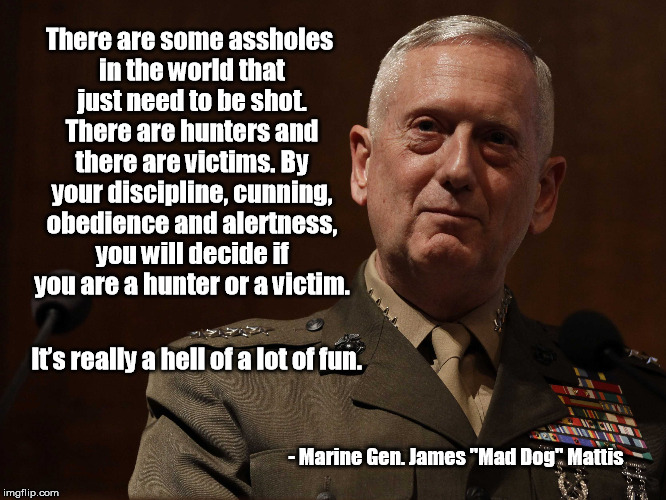 James Mattis, the retired Marine Corps general who has been tapped to be Donald Trump’s secretary of defense, is known for his earthy aphorisms -- eminently quotable, often controversial observations on everything from the romanticism of war to the secret of personal success (“I don’t lose any sleep at night over the potential for failure. I cannot even spell the word,” he once said.)

Reporters who have followed the arc of the four-star general’s 44-year military career from the sands of Iraq to the halls of the Pentagon have dubbed his many pithy statements “Mattisisms”; his legion of admirers call him either “the Warrior Monk” or “Mad Dog.” One Mattisism -- “be polite, be professional, but have a plan to kill everybody you meet" -- even made it into a popular video game.

It turns out that Mattis, whose gruff exterior masks a finely honed intellect, may have influenced the president-elect’s view on waterboarding with something of a Mattisism. Trump told The New York Times that he was “surprised” when Mattis told him he does not favor the practice.

“He said, ‘I’ve never found it to be useful,’” Trump relayed. “He said, ‘I’ve always found, give me a pack of cigarettes and a couple of beers and I do better with that than I do with torture.’ And I was very impressed by that answer.”

By Bryan Bender and Andrew Hanna

Here’s a sampling of Mattis’ most memorable quotes:

In 2005, he offered this commentary on war: “You go into Afghanistan, you got guys who slap women around for five years because they didn't wear a veil. You know, guys like that ain't got no manhood left anyway. So it's a hell of a lot of fun to shoot them.”

He continued: “Actually it's quite fun to fight them, you know. It's a hell of a hoot. It's fun to shoot some people. I'll be right up there with you. I like brawling.”

At the time, after the remarks made some waves, Marine commandant Gen. Michael Hagee noted that Mattis “often speaks with a great deal of candor.”

Speaking to some 200 Marines, Mattis had this advice, according to longtime reporter Thomas Ricks: “The first time you blow someone away is not an insignificant event. That said, there are some a******* in the world that just need to be shot.”

Mattis elaborated, “There are hunters and there are victims. By your discipline, cunning, obedience and alertness, you will decide if you are a hunter or a victim. It’s really a hell of a lot of fun. You’re gonna have a blast out here!”

By Shane Goldmacher and Gabriel Debenedetti

4. ‘Be polite, be professional, but have a plan to kill everybody you meet.’

According to the same report, Mattis advised his Marines in Iraq to stay vigilant. In that vein, he also once said, “There is only one ‘retirement plan’ for terrorists.”

5. ‘There are some people who think you have to hate them in order to shoot them. I don’t think you do.’

6. ‘In a country with millions of people and cars going everywhere, the enemy is going to get a car bomb out there once in awhile.’

Matt was characteristically blunt in a 2007 interview with the San Diego Union-Tribune. “There are going to be good days and bad days. Bottom line,” he concluded.

Congress
Senators clamor for Corker as secretary of state

Mattis gets a third of his briefings on the presentation platform, though, The New York Times has reported.

8. ‘I get a lot of credit these days for things I never did.’

For all his proverbial outspokenness, in a 2004 speech at the Naval Academy, Mattis was reportedly modest about his accomplishments.

9. “Engage your brain before you engage your weapon.”

Mattis, a student of counterinsurgency tactics and strategy, sent this advice to his Marine unit only a few hours before they helped kick off the 2003 invasion of Iraq. “While we will move swiftly and aggressively against those who resist, we will treat all others with decency, demonstrating chivalry and soldierly compassion for people who have endured a lifetime under Saddam’s oppression,” he wrote.

"Mad Dog" Mattis has no idea what compassion is AT ALL! At least Trump picks guys with a great sense of humor.

Though there's not much difference between Afghans slapping women and Americans slapping Afghans.

I think Trumps cabinet picks are a reflection of himself in many ways, they literally "mirror" him, the hidden aspects of Trump, just like any President has a mirror reflection of themselves in their cabinet. I must admit, I don’t see General "Mad Dog" Mattis with a shred of humor, this guy kills people for a living. If that’s amusing to you ET, then I guess we don’t share the same sense of humor. I fail to see the humor in someone who shoots people and moreso, enjoys doing it..

To quote the man himself:

He reminds me of Sergeant Hartman in "Full Metal Jacket"

When you take his comments seriously, it's not funny, but when you see the madness of it, it's better to laugh about it.

I think I'm not smart enough to understand that there are people who believe in such things, that it's not their goal to entertain us, but that they mean it. All I can think is: what the heck! And that's the most clever thing I can say.

Ludvig Roth liked amparo alvarez's blog post IVO OF VEGA: THE BATTLE OF LIFE...VERY GOOD ADVICE FROM HIM>..
7 hours ago

Ludvig Roth commented on the blog post 'IVO OF VEGA: THE BATTLE OF LIFE...VERY GOOD ADVICE FROM HIM>..'
"Thank you Amparo, thank you Ivo...I needed to hear that...so much anger still there"
7 hours ago

We Are One commented on the blog post 'It's Time'
"Yes, I am more than ready! Thank you!"
10 hours ago

Carolin Radcliff commented on the blog post 'THE 9D ARCTURIAN COUNCIL - DON'T WAIT FOR THE EVENT/SOLAR FLASH'
"Lol, some people even work hard at having fun."
16 hours ago