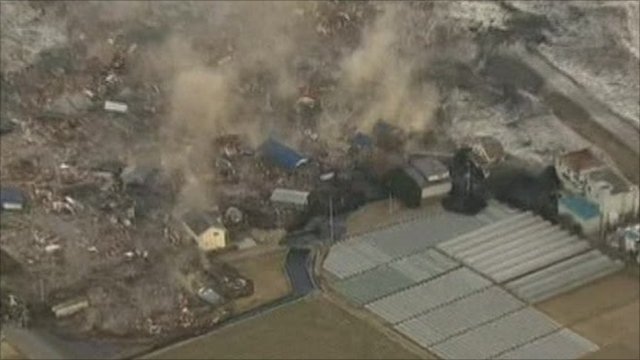 A massive earthquake has hit the northeast of Japan triggering a tsunami that has caused extensive damage.

Japanese television showed cars, ships and even buildings being swept away by a vast wall of water after the 8.9 magnitude earthquake.

Officials said there could be a 10m (33ft) wave, with numerous casualties feared.

The tremor at 1446 local time (0546 GMT) was followed by a series of powerful aftershocks.

Seismologists say it is one of the largest earthquakes to hit Japan for many years.

The tsunami warning was extended to the Philippines, Indonesia and the Pacific coast of Russia.

The earthquake also triggered a number of fires.

There were also reports of injuries in Tokyo.

Are you in Japan? Have you been affected by the earthquake? Send us your comments using the form below:

Read more…
Started by James McConnell in Spirituality In General, Channeling and Channeled Messages, and Ascension and Awakening
0 Replies
Views: 453

"This nuclear potential for escalation, virually written into NATO's absurd rules, means that they cannot be taken as sane....As you say, throughout history, minor border frictions did happen in Europe....It did not and should not always lead to a…"

"What else? Britain etc does not share any boundary with Russia, and so the original Aim of NATO was a more reasonable deterrence with the immense power projection capabilities of USSR in mind, not mere traditional wars where neighbours often are…"

"As stated below, in my previous life on Earth I incarnated in Germany (I died there) and was named: Oberst Siegfried Kötz....Before WW2 I was a successful dairy business Manager, in Westen Preußen...West Prussia, as it was divided after WW1's…"

"Roaring said: "The cheapest way to avoid war with Russia is just to maintain a good relationship with Russia. No need to join NATO! All these countries near Russia are not in NATO: Iran, Azerbaijan, Armenia, Kazakhstan, Mongolia, Uzbekistan,…"

"Whenever I hear this song I think about doing sports. Sport is kind of like self-destruction. However, with a rather positive side effect.
https://youtu.be/o7x0Kz90Hrk"

"It burdens American tax payer and demeans a European! Essentially, it says unless Europe is constantly threatened with an external enemy, then it cannot stay together in peace'. Include Russia in the 'peace map', so that there is no 'external enemy'…"

"Yes, it is never a good mix when someone such as Hamilton, mix their sporting careers, with a political cause...He gets paid enough to do his job....He should stick to it....In such a position, one should show neutrality.....The same goes for banks…"
More…
Loading ...