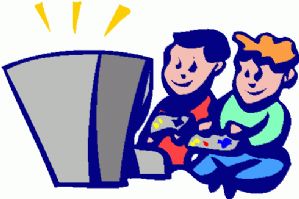 In essence it was explained that playing violent video games has a severe negative karmic effect, because the intention of the player is to kill. In the response, the young man recognized that intention creates karma, but pointed out that violent video games do not cause the intention. That intention was already there in the mind of the person playing the game. The game is merely an outlet for violent feelings, instead of expressing those violent feelings in real life.

The young man also made the point that however spiritually correct the guru was, he lacked political intelligence, because banning violent video games infringes on the freedom of expression of individuals, and since they are not actually hurting anyone they should have the freedom to play them. He makes the additional point that parents should control what their children are allowed to play.

From my point of view I can see the merits of both sides of the argument. By playing violent video games (killing games). A person is indulging their intention in the action of killing (simulated) which is magnified by the playing. They are sending out the mental and emotional vibrations of violence and killing into the universe. This contributes to the collective negative karma of the planet and creates the personal karma for them to experience and engage in more violence in the future. It also places their vibration within lower astral emotional levels, essentially which creates the causes for suffering, limitation and unhappiness in the future.

On the other hand, everyone has the right and free will to experience what they choose to. I agree that many young men(and women) have feelings of violence and anger that they need to deal with and perhaps playing violent video games helps them in some way. Of course a lot of people will say that they don't have violent feelings they just play those games for fun. I also agree that video games do not cause people to go out and kill people like some conservatives suggest. The idea of using video games as a kind of punching bag to deal with aggression that might otherwise be expressed in real life has some merit

Anger, violence and aggression are what many people suffer with. Our civilization does not currently have the necessary social maturity to properly assist people to deal with this in an effective and positive way which results in lasting emotional healing. In other words the deep problems within the psyches of many individuals has no solution in this age of the world. So whatever works right?

Having said that, engaging and indulging in negative activity is the easy way out. To create positivity within ourselves and our world, leading to peace and happiness often takes a supreme commitment to harmony. It requires that we recognize with the eyes of an eagle, the negative aspects of our personality and use every method to get them under control. This is the path of self mastery and is in no way easy. Simply put, to find the wisdom to control and purge ourselves of violence without repressing it and engage in practices such as meditations on Love and compassion is much more difficult but leads to spectacular results which our profoundly beneficial for our evolution and for the world.

I don't think people who play violent video games should be made to feel guilty. We are all here to learn both from the negative and the positive and we have the free will to experience the full range of all that life has to offer. Thus there is no judgement in this regard, only learning. What it is hoped that we will learn is that the suffering, limitation and pollution caused by engaging in things such as violence, lust, greed, hatred etc. is in no way to be desired. That the wonders, beauty, freedom and joys that result from a commitment to Love and Harmony are very much the fulfillment of the highest happiness for the human race.