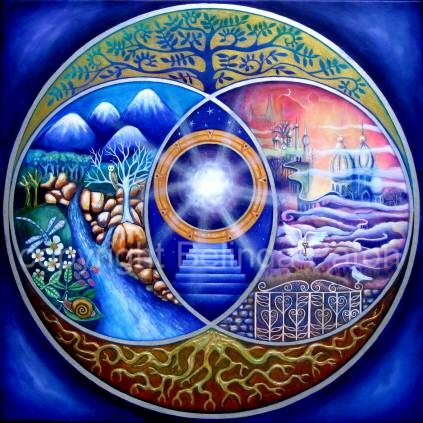 Hello Dear Friends ~ In the above picture, you can see the merging of the worlds - the physical and
the higher dimensions. When you look at here you can see on the left.....a physical or dense world.
On the right side.......a lighter, purer, and higher spiritual realm.

Some may still be perplexed as to
how we are going to get there! If you understand that energy vibrates at a certain speed, ie., to create
a physical world, the energy slows down quite a bit to become a solid form.

When you know how to
increase your vibratory rate which, by the way, is spiritual energy - pure light, you can raise it sufficiently
to go to higher dimensions.

That is how Beings from higher dimensions visit Earth, or indeed, come to
speak to a particular person on Earth. But, they usually stop short of becoming totally solid.

There have been many reports over many centuries about visitors from Heavenly Realms. The reason
they are at that higher dimensional plane called Heaven, is because they have transcended every
dimension that leads them there. And there are many dimensions. So, when a Being from a higher
realm appears to a person on Earth, it is not always necessary to become solid again.

That is when
they look like Super Humans because of their appearance and the energy they give out - pure love
encased in pure light. At Sai Baba's ashram in Puttaparthi, Southern India, there can be millions
at any celebration, particularly His Birthday.

Some years ago an Australian author and his wife were
guests at one of Baba's cottages on the ashram grounds and they witnessed the massive crowds
pushing through one area to get to another. In the crush, an elderly lady was knocked down.

The
crowd started to separate as a very handsome, strong man appeared with a hat that had wrapped around
its crown a snake. He was very concerned about the elderly lady. He was accompanied by a lovely
young lady in a sari.

After asisting the lady off the ground and helping her to a seat on the side, they continued to assist the
crowd to move in an orderly fashion. They appeared to be superhuman and had a tremendous spiritual
aura about them.

The author asked some of the Indians there who this couple was, and they replied,
" That is Shiva and Parvati. They often appear here at the ashram, especially to assist or protect people
from harm. "

And people think that the Godhead sits on thrones up in Heaven twiddling their thumbs!
People in India, who are frequently at the ashram, witness all kinds of divine visitors and other spiritual
manifestations.

Miracles are natural occurrences and not unusual to those who witness them year
after year. Divine energy is available to those who are serious about transcending this physical plane
and uniting with their divinity within. It all takes self-discipline and a determination to devote time out of
your busy life to adhere to practices that promote the expansion of the lightbody through bringing in more
light. This in turn expands the aura.

Many people start with the meditation on the flame, then go from
there, as they are guided. 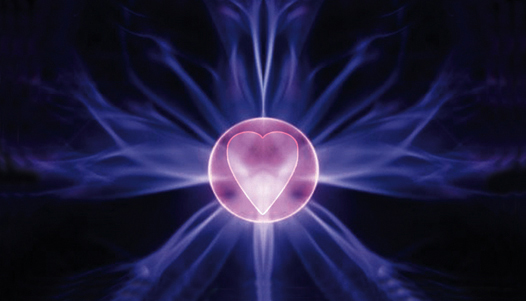 Gradually, with the transformation of the heart, one will begin to see all souls with love. Love is the main
ingredient to expand the heart chakra, which in turn flows upwards into one's face like a beautiful glowing
light, and, without a second thought, share that love with everyone they meet.

How happy they look !
Life takes on a higher meaning. The journey home to divinity within has begun!

With utmost Love and Respect,
Tara *~~

Views: 616
E-mail me when people leave their comments –
Follow