Sunday 11:15AM. I woke up from an amazing dream or what felt like a dream. This morning maybe an hour prior, I heard someone calling me, telling me that someone wants to see me, and this was broad day light. I was wide awake in my bed, for some reason I felt compelled to reply politely "No Thank you! I don't want to go, I attempted to pull my blankets over my head, but I failed several times and when I finally yanked the blankets I saw an average height figure appear but my mind took it as a dream, and from there it was all taken place in dream state....the lady resembled my mother, wearing striped pjs (I bought my mom the same pjs 1yr ago!! Maybe that was for a more comfort effect since last time I saw a being it scared the shyt out of me, and I immediately went into prayer mode!

When I saw this person a calm effect took over, believe me I wasn't in anyway calm when I was attempting to cover my head with a blanket! The being was determind, she said to me "They have something special waiting for you, Because someone believes in you. Come on get up, lets go see! (she reached out her hand) I gave in "Oookay" and we rushed out the apartment door. my hair looked a mess, I was still in pajamas! and the lady looked at me and said "What is up with your hair??" and when  I told the lady she was like "ah, ok nevermind there is no time to fix it." (still holding my hand, in the apartment hallway we saw two stair cases, one that was going down stairs another that was going up stairs, pretty normal for an apt building) I asked the lady which way are we going? and she said, "we're going up." we flew up the stairs, I don't even remember climbing the stairs and at the end of the stairs there was a window, the lady said "look you can see the ship they're waiting for you!" it was a large bright yellow light. and when I looked longer I saw the humanoids standing outside the ship waving and smiling (it reminded me of a parade float with pargent queens waving) about four humanoids were waving they had on white suits, and long robes. The ship was gold with bronze designs. It was shaped like a polygon with hexogon points, the whole thing looked like a huge star shape craft thought honestly think it was a scouting ship and not the mothership, like I mentioned they were standing on the outside.

After seeing that they released a tiny saucer about the size of a small pizza box that was gold with bronze designs; I had to catch the saucer, I don't remember why. I woke up.

If anyone has experienced something similar please share! this was my second time seeing a ship (1st for the new year, first time it was when I activated my 3rd eye over a year ago). This isn't something that happens often.  ~Cheers! 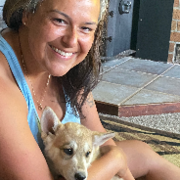