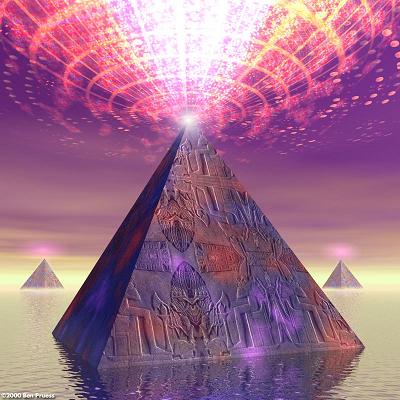 The Group: Pyramid Power, channeled by Steve Rother, May 15, 2013 at http://www.lightworker.com/

This is an excerpt from May’s monthly message from The Group, ‘November Harvest - Re-seeding Planet Earth‘

All of humanity has turned a corner, and in doing so your attachments to those things that reflected your power has been quietly released. Many of you have seen the remnants of those who put the protective shields in place originally to protect Earth. This is when you talk about who built the pyramids. Much of the unexplainable becomes explained when you see from where humanity is now. Many of the artifacts of Earth still have no traditional explanation about where they came from or what they are doing on Earth.

These shadow memories have been intentionally blocked from you by your own design. The pyramids have always formed a protective shield around Earth, even though they have been covered and forgotten in many places on Earth. These are not all pyramids because some are manmade pyramids that have copied the original designs with varying degrees of effectiveness.

The network of pyramids on Earth have formed a protective shield around the planet, which has kept specific meteors and comets from hitting it. That has been released and for a very specific reason. You have heard about the two big meteors that have come in and made the front pages of your newspapers, but you are not aware of all the small ones that are coming in now.

Because this protective shield that was in place from almost the beginning of Earth has been released, you will receive a planting of these comets in November of this year toward the end of the month. You will have a comet that will come by and sprinkle life on Earth. We tell you that specifically, because all life was planted originally from comets.

Your scientists do not agree with us on this point, but we will tell you, you are not from Earth nor is anyone. You have been very carefully placed here by yourselves. Now you are going through an evolution. It was always necessary for you to die and leave the physical body, then go Home to recycle and reincarnate to come back and do it again.

This is the first time that humans walked through the gate without going Home, without dying.

You are walking in an ascension process right now and every step of the way you are higher than you were yesterday; all of this is a beauty that you hold in front of you. All of you have control of this. Do not fear these comets, as they are bringing a new form of life for they are sprinkling life forms. You have been losing life forms on planet Earth for a very long time and now it is being re-seeded in a new way so watch and celebrate the November comet. You have already given it a name, but I will hold off on telling you because my names are not the same as yours.

Your scientists know of this comet that is coming and it is sprinkling dust along the way. It is basically disintegrating every time it passes and when it does, it will sprinkle cosmic dust on planet Earth. In fact, your scientists are now trying to calculate to see if you will actually be able to see the dust falling. That is how much dust they are expecting from this November comet.

In fact, the comet would have never hit Earth except that you went through the portal and released every part of it. It is not going to hit Earth; it is going far away from it and hooking around the sun, but it will sprinkle all these beautiful seeds of life on planet Earth. You are here, dear ones, at an incredibly beautiful, critical time in all of humanity and all the timelines of Earth herself, the entire energies of Earth are being re-energized-even the ley lines, the magnetic ley lines that form the magnetic grid that carries your Earth are reducing.

Your magnetic structures on planet Earth have reduced 12% over the last 100 years. That is also leading to your awakening from the dream. Very beautiful. You have done well; you have carried it here and you are here. You made it. Not only did you make it, but you are sitting here asking what can you do next?

You are in the perfect position to be conscious creators of planet Earth and we hope that you enjoy this journey, dear ones, for you have signed up and waited an eternity for the opportunities that now lie in front of each of you. You know the way Home and if you will stop thinking with the brain and start feeling with the heart, it will lead you Home. You know the way and we will greet you with the most incredible open arms and welcome you Home when you finally do decide to shed those bodies to re-turn.

Dear ones, even now you are the greatest angels that have ever lived and we mean that in all sincerity. We have never seen what has happened on Earth and we are so proud of you. You have created magic with your eyes wide open. It is with the greatest of honor that we ask you to treat each other with respect. Nurture one another and hold those doors open every chance you get and play well together. Espavo.

Views: 260
Tags: group, rother, steve, and, the
E-mail me when people leave their comments –
Follow