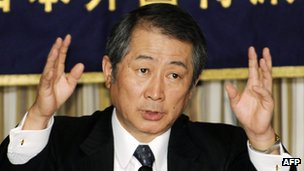 The chief executive of Japan's Nomura Holdings has resigned following a damaging insider-trading scandal at the investment bank.

Kenichi Watanabe will step down on 31 July, and chief operating officer Takumi Shibata will also leave his post.

It is alleged that staff leaked information on share offerings to customers before it was made public.

Nomura shares rose more than 5% in Tokyo on the news.

Koji Nagai, president of Nomura Securities, the domestic brokerage, will replace Mr Watanabe as the new head of the group.

"We will make bold choices of what we will focus on," said Mr Nagai at a press conference, adding he would chart a "new global strategy".

"We will not simply stick to how we did things in the past," he said.

Last month, Nomura slashed the salaries of Mr Watanabe and Mr Shibata after an internal probe into the leaks.

The company has also admitted that some of its staff leaked sensitive information on planned share offerings by energy firm Inpex, Mizuho Financial Group and Tokyo Electric Power in 2010.

But on Thursday, Nomura said it was "highly possible" that there were more cases of insider trading than the three already identified and reported to the Financial Services Agency.

"When you look at their history, the number of scandals, this was the last straw," said Jim Sinegal, an analyst with research firm Morningstar.

Mr Watanabe and Mr Shibata led Nomura's global push, taking over the non-US operations of Lehman Brothers in 2008, in what was described as a "once-in-a-generation opportunity."

However, the group has struggled since with a number of challenges, including cultural tensions over its business practices.

Earlier this year, Nomura ousted Jesse Bhattal, head of the global wholesale division, following disagreements over the direction of its overseas business.

Pet Rock replied to the discussion 'If You Are Going To Or Are Wearing A Mask Make Sure It's Good As Some Won't Do The Job...One They Claim Is Very Good'
"yes-carbon coated medical masks-carbon is positively charged and catches negatively charged…"
3 hours ago

Richard Levison liked rev.joshua skirvin's blog post **We have thousands of ships around the sun and Light Beings on Earth ! Video by Gina Hill
9 hours ago

Alan commented on the blog post 'IT IS TIME TO MERGE WITH THE ALL KNOWING OZ WITHIN'
"And free it shall be so be it, thank you @ this point in our lives enlightenment means…"
14 hours ago