At 11:55 AM EST December 21st 2012 we leave a 26,000-year period known as the ‘Kali Yuga’ (Iron Age) and begin the 26,000-year period prophesized as the ‘Golden Age’....Each Yuga has two 13,000-year periods where male and female ethics dominate. We are ending the last 13,000 years of male dominance and all that has entailed...The 4th dimension will slowly begin merging into the 3rd dimension where guides, angels, nature spirits and the voices of past lives become more evident in our lives...

At 11:55 AM EST December 21st 2012 we leave a 26,000-year period known as the ‘Kali Yuga’ (Iron Age) and begin the 26,000-year period prophesized as the ‘Golden Age’. I have drawn a natal chart at the Trade Center site in New York City depicting the astrological aspects at this sacred point in time. All four meridian points, Ascendant, Midheaven, Descendant, and Nadir are ‘void of course’ as well as the Sun, Juno and Neptune. Void of course is the area at zero degrees when a planet holds the energy of universal intent. The Sun and Juno are conjunct the Midheaven at the point of the Winter Solstice. Neptune is in the first few minutes of Pisces, opening the ethic of spiritual evolution to all possibilities. The ascendant sits on the Spring Equinox point and the lower heaven or Nadir sits on the Summer Solstice; the Descendant sits on the Vernal Equinox. 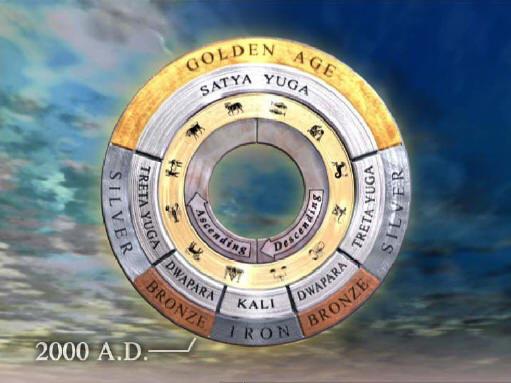 The Universal meaning of Juno conjunct the Midheaven and void of course at the Winter Solstice point is the beginning of 13,000 years of strong feminine influence. Each Yuga has two 13,000-year periods where male and female ethics dominate. We are ending the last 13,000 years of male dominance and all that has entailed. We have seen the downfall of dictators in the Middle East as the precursor to this movement. The consciousness surrounding greater ecological awareness and alternative energy has also preceded this awakening. The advent of greater social interaction through technology is the first wave of feminine consciousness.

The Sun at the Midheaven has a very specific Universal meaning. The magnetosphere (Earth’s Light Body) has been in a migratory pattern where its south pole has finally reached the North Magnetic Pole and will prepare for a reverse polarity. The magnetosphere sits idle, without movement, through the Spring Equinox of 2013. Then it begins its reverent movement to the South Magnetic Pole during the feminine period of the Golden Age. Also at this time, the Great Central Sun enters the portal at 19 degrees Scorpio, which is the polarity point of Wesak at 19 degrees Taurus under Orion’s Belt. In part, the heating of the planet and droughts have been due to the increased magnetic energy of the Great Central Sun with our solar system.

During the 89 days of an idle magnetosphere, many subconscious phenomenon paradigms will occur. The 4th dimension will slowly begin merging into the 3rd dimension where guides, angels, nature spirits and the voices of past lives become more evident in our lives. A new clairvoyant ability observing 4th dimensional entities will slowly sophisticate. Our dream states will become much more meaningful in terms of our future endeavors. Uranus sits on the Ascendant of the fore mentioned chart, indicating an uprising in all psychic awareness from our higher selves. We are to become far more self-autonomous in determining our own reality. The moon in this chart is in Aries marking the awakening of spiritual warriors. Saturn sits in Scorpio, bidding the advent of self-healing and the healing of others through latent abilities within our higher selves. For many, the higher self will actually fragment, dismissing guides and replacing them with other aspects of your consciousness.

Pluto is conjunct the Midheaven as well. Although it is almost 9 degrees away in this orb, it still maintains a substantive influence on us. Our entire evolution is now entering an evaluation period by a myriad of hierarchies from many solar systems in the Milky Way. Many new planets are coming into environmental symmetry and the Creator Gods from these worlds are seeking new masters rising out of this ‘Free Will’ experiment. They will need Avatars to formulate the spiritual and cultural ideologies on their planets. This is a ‘Harvest’ experiment, a process that has been repeated in this universe for millions of years.

Finally, in the chart, Jupiter is in polarity with both Venus and Mercury offering us the opportunity to create a new reality that is void of male ethics in our opinions, judgments, and manner of communication. We are expected to become far more impeccable with our words. We are expected to observe this reality as more of an illusion that is helping us with our learning process. We will not make assumptions about others for that is futile in our learning process. We will not take offense to what anyone says toward us as that is irreverent to our spiritual understanding. We will always, always know that in every instance in the future, we are clearly doing our best based on the complexity of this dense karmic free will experiment.