This post is not about the being known as “Ashtar Sheran”, but an explaination of the use of the term, “Ashtar Sheran”.  Notice I said, TERM and not name.  The information contained in this post is from my own experience in communicating with Archangel Michael directly, as well as information obtained from Michael via channeled message through Ariel DeAngelis.  For those of you who aren’t familiar with Ariel, she is a highly respected Galactic Federation of Light member/channeler.

The following are excerpts from channeled messages via Ariel DeAngelis and via myself.

In March of 2011, I received a message from my spiritual guide, 'Ashtar Sheran', while in the dream state. He said,”You are about to embark on a grand adventure “.

At the time, I didn’t know quite what to make of that, but took the message to be good news, as I am the adventurous type.  At the time, I felt that perhaps his statement had something to do with “Disclosure”.

Then about the end of March, beginning of April 2011, I was connected with a woman on Facebook named, “Ariel De Angelis”.  At the time, I was closely following the channeled messages from The Galactic Federation of Light, but especially any messages supposedly posted by "Commander Ashtar Sheran". I noticed that Ariel was posting notes regarding disclosure. She stated that disclosure would happen soon and gave a time frame. I had expressed my doubts even though I had heard that disclosure would take place soon.

I however, had not been given any dates. I also knew, as a general rule, that The Galactic Federation of Light does NOT give dates. It took a few communications back and forth for me to realize that perhaps she might be right about disclosure. In response she said, “It is easy to know for certain when you are in communication with the Commander of the Fleet”.

My response was “Oh!; wait a minute; you mean your source is my source?! All this time we have been communicating with the SAME person! We both had a good laugh about it. Little did I realize that there was more to be revealed….

Ariel then mentioned to me that she has a blog she regularly posts to called, ”The Discerning Angel”, which contains information about her and her experiences with Archangel Michael. She invited me to read her blog, which I did. Although I didn’t get to the “About Me” part, I found her posts to be fantastic! I really resonated with what she was and still is sharing.

However, I still wasn’t making the connection that Archangel Michael and 'Ashtar Sheran' are ONE and the SAME. I thought that Ariel was channeling both 'Ashtar Sheran' AND Archangel Michael. One day 'Ashtar' had shared something with Ariel, but not me. I asked Ariel why he had only shared that info with her and not me. She said, “you didn’t read my ‘about me’ on my blog did you”?

I said, “no; not yet”. So I read her “about me” and I still wasn’t making a connection! Ariel’s blog has many accountings of her relationship with Archangel Michael. At this point you might be wondering, so what does Archangel Michael have to do with ‘Ashtar Sheran’?

By summer 2011, I was reading posts by The Galactic Federation of Light on Youtube regularly.

Ariel confirmed for me that my understanding that AA Michael is 'Ashtar Sheran' is technically correct, just not the way I think. She informed me that actually "Ashtar Sheran" is NOT his incarnated name. He only goes by ONE name ...the name 'Source' gave him, which is "Michael". 'Ashtar Sheran' is NOT a name, but a TITLE!

She also mentioned that this is Michael’s FIRST incarnation in the lower dimensions. It had actually been planned out for a very long time that Michael would incarnate during this time to assist humanity with ascension.

So there you have it; straight from Archangel Michael, "Commander of The Most High" (Ashtar Sheran). 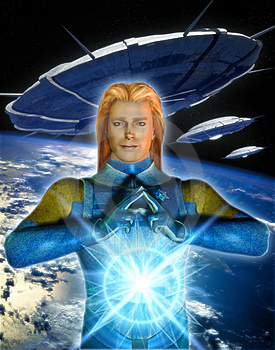 Views: 846
E-mail me when people leave their comments –
Follow "A point regarding this coronavirus, which seems to exist after all. There were some people whose immune system had managed to produce antibodies. The body is intelligent and you can learn a lot from biological nature in this case. The question is…"

"I am here to help people in the darkest world age, I can feel that. I slowly believe that I wanted to come here, that my birth is 100% no coincidence.
I wonder if I have any special skills.
Is it true that I could be a shaman if I can heal? I coud…"
More…
Loading ...