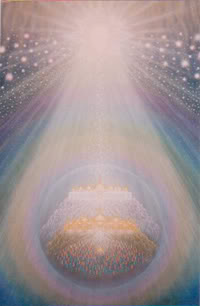 This is a special message I received today from Archangel Michael as we have been getting prepared for our Full Moon Ceremony tonight and tomorrow our class on 5D Body High Vibration Protection Protocols. As has been stated in the calls for the last several months, we are walking with each of the Ascended Beings unto the New Earth. Michael brings forth a very powerful message..

It is with great pleasure that I fully acknowledge each of you from the beginning of your creation as we all were together. Earth is now at a crossroads of allowing the old timelines to be removed of the walk each of you have created while being in humanity as you expressed it through your physicality.

You are still very much physically but starting to acknowledge the parts of yourself that have been lost and removed from your consciousness. That was the Divine plan so that you could fully remember unto yourself when it was time. Well, the time is at hand and each of you is fully accessing these elements.

At the time of Creation, we all were in angelic form together fully acknowledging our powerful gifts. We were separated into the principalities and guided in certain pathways to share these amazing feats that could be accomplished. We were then given opportunities to take these gifts into other forms, Earth being the human form but within that the gifts would only be remembered up to a certain age. If the cultivation was not nurtured within the child, after a certain age, the gifts would be tucked away until the Higher Self could access them. They would come through dream states, in visions, and living in imaginary worlds until they would be fully ready to be acknowledged with the essence that they held for humanity.

During this time, many of you decided to return again and again to remember who you were so you could access these gifts, but the effects of the earth energies did not always support these elements. Some could and others were not ready as the abilities that each of you accessed were so powerful that in human form it took on the role of the fears. So in truth you created pathways to get through these blockages from the Light, created doorways of darkness as that was also part of your personal plan. These are what we commonly refer to as “Timelines,” pockets of creation through lifetimes that are stopping the full potential to be manifest within the creation of the Now.

In this moment of time, this year of 2012, all of these timelines are being ignited for each of you to either release or embrace. We are still in the age of duality of the 4th dimensional reality of Earth but are quickly moving to the new paradigm of the Golden Age. As this process continues, the timelines will be acknowledged by your lower self to be accessed through your Higher Self. It is a frequency of continuation that is being guided by each of your I AM Presence’s. In order for you to remember you must remove the old elements that are stopping you from fully accessing your Divine Potential.

This is the “Crossroads of Creation”. As each of your lifetimes held karmic relationships with others, both good and bad, those frequencies are being ignited by the Light and the Dark. Many beings of the lower frequencies are still existing as they never allowed themselves to fully feel their light within so each are combating with the Light for existence. If you can try to understand the levels of creation within each Soul’s existence, then you can grasp the knowledge that once we were all the same. Now through the different timelines we are coming back to the Source of Oneness but in that journey it can be riddled with great challenges of darkness.

It is a time of the mastership role to be acknowledged by each of you. This is your acceptance as being a Light Worker of learning to combat the darkness with the Light. This is also true of each of you individually through all the timelines that exist for you in your soul’s remembrance. As you bring more Light onto yourself, the old timelines need to be removed so as not to fall into the old roles of warriorship and power by death. The ones that are now in the warriorship roles will take the responsibility of removing these pesty beings of non-light. As you let go of the old timelines, you move fully into the Oneness that You Are, and become a Torch Bearer of the Golden Flame.

It is each individual’s choice of where they want to go with these elements, but in truth it is your time to fully take hold of your Mastery upon this Earth. I stand here as Archangel Michael and shall always protect each and every one of you as many of you have stood with me before. It is now time for each of you to find your own strength and power of being the Torch Bearer of the Golden Flame. I walk with you; not in front of you and not behind you. I will guide you through this pathway but we are all experiencing new levels of awareness that fully need to be acknowledged.

The difference at this time is that you now are walking the Earth fully embodied with this knowledge and wisdom while understanding the process you are going under for complete Divine Completion. The duality that is occurring upon the Earth is great but not as great as the Light that each of you embodies. Thinking love is helpful but you must fully accept it in all parts of your existence. Allow yourself to fully embody the Angelic Being You Are while accessing all the positive timelines in which you created these elements to occur upon this Earth as a fully Divine Being of Oneness.

I cannot stress to you enough of the importance of the Unified Whole Command that Meleriessee and Michael are sharing with each of you. They have been asked to speak of these frequencies as Now It Is Time. We are all part of the Unified Whole but fully must remove the old paradigms that kept us from creating Oneness Within Ourselves and in our world.

I stand with you; watching you as you express your Divine right as Sovereign Beings of the Light to share unto this world. I have been awaiting this day as many of you have stood with me previously and now we walk together. I am no greater than you as I AM YOU.

All my love in Divine Essence,

I AM Archangel Michael

Join us for a special Full Moon Ceremony on Wednesday, March 7th or our class on Spiritual Protocol, Thursday, March 8th

Views: 132
Tags: am, archangel, earth, higher, i, michael, new, presence, self, ascension
E-mail me when people leave their comments –
Follow