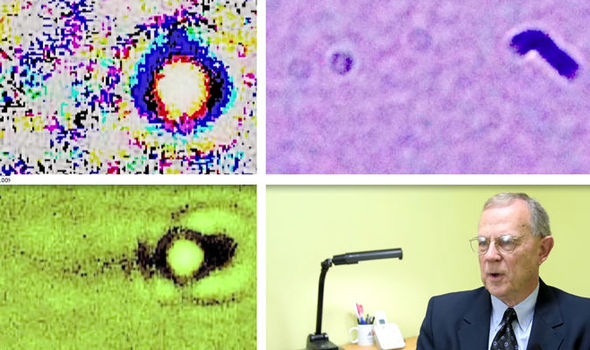 Top leading SCIENTISTS who have been seeking evidence of anti-matter in space have recently claimed to have stumbled across a previously unknown “invisible life form” here on Earth, which could quite possibly be SPYING on us all!  Could this be the proof that we need to confirm that we are not alone and being visited by Alien Beings?  Quite possibly.

It is a successful corporation called Thunder Energies, which is an optics, nuclear physics and energy company, who have claimed to have detected “invisible entities” living in Earth’s atmosphere and watching over us all!

Dr Ruggero Santilli is actually dismissed by many mainstream scientists as a “fringe scientist” but he has in turn branded the rejection of his work as a conspiracy against “novel science” which often conflicts with established thinking, such as Einstein’s theory of relativity – sadly the masses of this planet are too brainwashed to realise sometimes that there may be more than meets the eye to ‘what’s really going on!

Please check out the video to their exciting find (actually a rather interesting video):

Let me reiterate, as there are some typos below , haste makes east , I was indicating that it is time for people in authority to present the reality of their observations of the Universal and interdimensional beings, which are often called ET's buy some. This is a preeminent paradigm shift that can result in a multiplicity of extremely constructive evolutionary events for all , including universal peace , and in major unprecedented benefits to the Earth's health .

It is time for people in authority to present the reality of their of the universal and interdimensional beings are ET's called by some . For further information check out Dr. Steven Greer , if this particular area of contact and meditation is motivating element in your life .

I love to know more about Alians as I do believe that they are there and it's not a Fantacy...

I like the fact that we are now looking at multi-dimension possibilities due to technology. I also wonder if entities contained in such other dimensions would view us as friend or foe (especially those in government). This is especially true since some humans in this dimension are really great at making a mess out of things (since chaos is so much fun and a great way to do business).

Comment by Roaring Lovely on February 1, 2016 at 9:29pm
I have been claiming that 'dark matter' understood as weakly interacting massive particles (WIMPs) is one such exellent candidate for unseen realms we once thought to belong to angels, etc. I have even explained how ET might use the technique of turning off the electromagnetism so it may avoid friction. any UFO that might be electrically neutral in its fundamental particles wount interact with electromagnetic field or rather if they interact, it do so weakly hence weakly interacting particle. Such particle will automatically not be visible as visibility is about bouncing photons off the surface and photons are electromagnetic in nature. Then solidity is also about photonic interactions. Switching off the electromagnetism is exellent way of eluding friction in the atmosphere and even overcomming Einsteinian barrier. then such a space-craft will be automatically invisible.

1 darkstar commented on the blog post 'NOBEL LAUREATE CALLS COVID-19 MANMADE - The explanations of COVID-19’s origins by mainstream media simply do not add up'
"Of course this disease is man-made, all new diseases are."
3 hours ago

Richard Levison liked Pet Rock's discussion ACTION BULLETIN: Prepare for all-out war against the Luciferians; prepare to remove all governors and mayors who are China puppets engaged in treason, DNC pedophile rings to be exposed
11 hours ago

Richard Levison liked rev.joshua skirvin's blog post Back to the Future Decoded (Video's) 08/10/2020 By Stillness in the Storm
12 hours ago