This is pretty big news....I can't believe nobody's posted this yet lol 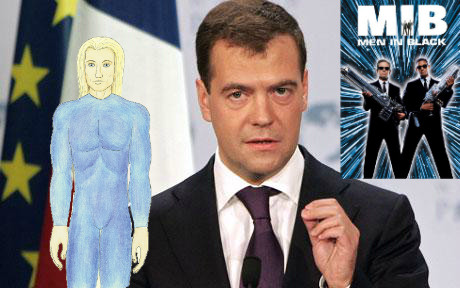 On Friday, December 7, the current Russian Prime Minister and former President, Dmitry Medvedev, made some startling off-air comments to reporters while his microphone was still switched on. He was asked whether the President is given any secret files on extraterrestrials while in office. In his responses, Medvedev not only confided that extraterrestrials are visiting the Earth, but that some are actually living among us. He went even further to say that the Hollywood comedy, Men in Black, depicting a secret government agency monitoring extraterrestrials on Earth, has a factual basis to it.

While the comments appear to be playful responses to a reporter’s off-beat question, they raise questions over exactly how much truth was being revealed by Medvedev. Given that Medvedev’s responses were given off-air, without him realizing that his microphone was still recording, they at face value give credence to claims that extraterrestrials are not only visiting our world, but are even living among us.

After completing an on-air interview with five television reporters, Prime Minister Medvedev continued to respond to reporters and made some off-air comments without realizing that the microphone was still on. His off-air comments were more frank about his real feelings on recent political developments in Russia where authorities were reigning in civil liberties. He was then asked by one reporter if “the president is handed secret files on aliens when he receives the briefcase needed to activate Russia's nuclear arsenal,” Medvedev responded:

Along with the briefcase with nuclear codes, the president of the country is given a special 'top secret' folder. This folder in its entirety contains information about aliens who visited our planet… Along with this, you are given a report of the absolutely secret special service that exercises control over aliens on the territory of our country… More detailed information on this topic you can get from a well-known movie called Men In Black… I will not tell you how many of them are among us because it may cause panic.

Medvedev’s comments are not the first time a prominent Russian official has spoken out about extraterrestrial life while giving television interviews. In an extraordinary television interview aired in May 2010, the Governor of the Russian Republic of Kalmykia, Kirsan Ilyumzhinov who was also President of the World Chess Federation, claimed that in 1997 he was taken from his penthouse apartment on board an extraterrestrial vehicle. Ilyumzhinov claimed that the extraterrestrials he met were humanoid and gave him a tour of their ship, and even took him to another world.

There has long been claims that not only have extraterrestrials been visiting our world, but have actually lived among us. A well documented case in Italy called Amicizia (Friendship) revealed that more than 100 individuals, including senior public officials, had met with a group of extraterrestrials with bases in the Italian peninsula and the Adriatic Sea over a 22 year period from 1956 to 1978. Significantly, these extraterrestrials were secretly monitored by NATO authorities who did not interfere with private citizens meeting with and providing supplies to the extraterrestrials. The Friendship case, if genuine, suggests that something like the official agency created to monitor extraterrestrials on earth depicted in the Men In Black movies, is based in fact. Certainly, Prime Minister Medvedev appears to think that such a “secret special service” exists.

While it can be claimed that Medvedev was giving a playful response to an off-beat reporter question, the full context of his off-air remarks suggest he was being candid on a range of topics, including extraterrestrial life. Plausible deniability certainly comes to mind when trying to analyze Medvedev’s frank off-air comments. This raises the intriguing possibility that Medvedev’s comments were orchestrated with prior approval to reveal facts to the Russian public that authorities are not yet able to officially announce to the world – extraterrestrials live among us.

Views: 135
E-mail me when people leave their comments –
Follow

Dr. Berg eats hamburgers, not the Mac version. I may…"

"BTW note that Russia wants to change the game! By renaming Donbas a Russian territory, Ukraine will now suddenly became the invader, not the other way round! Then Russia will declare a full blown war on Ukraine! That is when the world will be forced…"

"Why are they not accepting a referendum in donbass? I mean they talk about 'what Ukrainian want'. Why not give them a chance to speak for themselves, rather than someone purpoting to speak for them in a western MSM or waving flags in stadiums or…"
More…
Loading ...