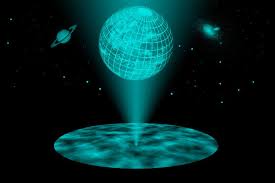 Of course one can say that a UFO is necessary in an holographic universe in the same way a car is still necessary even if the world is holographic. However, we are interested with the hologram as used to provide a means for swift interstellar travel. Without forming good theories of UFOs and the universe, then UFO as objective fact rest on shaky grounds. Then who realy is interested with UFOs if they are only psychiatric issues to do 'minds', 'hearts' or such? So we must definitely address such pressing questions?

Does a UFO works by 'who knows how something might surreptitiously disappears at one point and reappear at another point in an hologram'? If yes, why do an ET needs to enter into a 'Mexican hat' like structure for this accrobatics to take place?

An hologram is made by letting the information from a single point of an object get recorded throughout the hologram. So it is like myriads of photocopies mutasis mutandis. If you want to mean that thus this point is somehow 'omnipresent' throughout the hologram, then you arrive at the same daunting question that we often use to show what is wrong with the materialist claim that all it takes for your awareness to come about is your brain. We ask how about if there is a perfect copy of your body elsewhere? Does this mean that you somehow become 'omnipresent' in these two regions? Sadly, this is how some movies normally depicts. Two identical twins, so they tell us, shares the same awareness!!

Once you understand an hologram correctly, ie as copies of information, and that a copy of a thing is not 'the same thing at two places all at once', you begine to understand that holographic  universe does not immediately translate into 'a universe where everything is omnipresent.' So you can't 'move to stars' solely through the virtue that a copy of yourself (mutasis mitandis) is already there in stars. The copy is a copy of everything about you, except your awareness, a property we can't see from bird's angle to check if the object has. However, a copy of your body means that your awareness can easily propagate  from place to place without any object actually moving, much like a wave transfers energy without the medium itself moving. This movement of awareness does not require a soul, or anything 'immaterial'. Holographic universe completey obviates 'soul' or 'the immaterial' as a necessity for understanding teleportation, telepathy, reincarnation etc!

Hologram brings in another entity as a necessity in making sense of a claim like 'an object (such as a UFO) is here or there'. This is light, in the case of man made hologram. I like thinking of this entity as awareness, in the case of holographic universe. Without light, the information in the hologram can neither have the notion of 'omniprecence' nor that of locality of say a UFO. It is the light that gets bent from distant corners in the hologram, and then is converged into a single place, to recreate the image. So the light brings about the notion that 'this distant corners in the hologram are actually nearby in the projection', hence the notion of 'omnipresence'. So these distant places in the hologram are  'nearby' only when we think in the light of what these regions will do to the laser light. It is at this point where I want you to stop using the analogy of the artificial hologram and begine to attempt to understand the universe as an hologram literally!

In the natural universe, what brings about the notion of 'these far places are nearby in some hologram' is quantum entanglement. So we can drop the hologram all together. It was only useful as a scalf holder. In these 'far regions' exist two entangled particles (special 'particles of location'). An object can appear to be 'entirely on the same spot' and yet all its portions are actually distributed throughout the universe! This is because our awareness generating identity is similarly distributed throughout the universe and the  the usual universe is constructed by such an 'all pervading brain' like it was a dream, albeit the brain, and thus information, is realy realy huge! The 'brain' interprates the entangled particles as 'near', and thus 'projects' them on the same spot in 'who knows how awareness comes about'. The exact process by which this projection is done is as challenging as answering the so called 'bindind problem' in the brain. So we already know that the brain does this tasks of projecting information from distant corners into a single point, in generating our awareness of the point!! We, for instance, see say a dog as to be intact. Its nose is 'just near' the eye. However, this is not the case in the brain! If you see the information in the brain, the dog is no more discernable than when you try to see an image in the hologram itself rather than in the projection. The 'nose' can, for instance, be in one corner of the brain while the 'eye' is in the other corner. But there are 'nearby' in the awareness of the dog, for unknown reasons!

So we don't need to think of an entirely different entity. Just think that your brain does not end in your scull but rather extends throughout the universe. Then the 'interconnections' in such a brain is now not via neurones but via the virtue that different regions are quantum enragled with themselves, providing a faster means of communication than the neural signal, even across vast regions of the universe! In such a case, movement can be as easy as in a lucid dream. However, we still need a way in which our brains can know how to willingly control something from remort. Or in other words 'to make the dream truely lucid'. In a dream, we don't always have this control. It is only when the dream get lucid do we begine to 'perform wonders'. Part of our ability to control things remortely will be 'altering the frequency our brains emits'. So it is much the same way altering the frequency of your phone can switch from 'phoning someone in london' to 'phoning someone in Tokyo'. It is at this point, can you now understand the necessity of a UFO. A UFO, in this model, must be made of a material that vibrates in a certain way. When the crew enters it, the standing waves created in it alters the brain waves of the crew and makes them 'vibrate like the space ship itself'. As they 'make a dream that takes them to stars', the crew must ensure that they recreate the same same UFO so that once they 'come out of the altered frequency', they may easily find their way back.

Views: 58
E-mail me when people leave their comments –
Follow