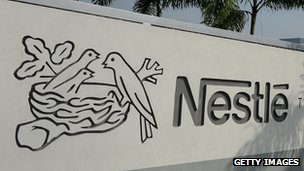 The Swiss-based firm has halted deliveries of products containing meat from a German supplier.

Nestle is the latest in a string of major food producers to find traces of horsemeat in beef meals.

A spokesman for the company said levels of horse DNA were very low but above 1%.

Last week the firm said its products did not contain horsemeat.

Lasagnas a la Bolognaise Gourmandes, a frozen product for catering businesses produced in France, will also be withdrawn.

A spokesman for the company told the BBC that Nestle had identified a problem with a supplier from Germany.

A statement on the Nestle website identified the supplier as HJ Schypke, a sub-contractor of JBS Toledo, a major meat processing company based in Belgium.

"There is no food safety issue, but the mislabeling of products means they fail to meet the very high standards consumers expect from us," the statement said.

In addition to removing the three affected products from sale, Nestle would be "enhancing our existing comprehensive quality assurance programme by adding new tests on beef for horse DNA prior to production in Europe", it added.

The BBC's Imogen Foulkes in Geneva says the news that the world's biggest food producer is now having to withdraw some foods, shows the problem is far wider than previously thought and, critics say, how dangerously unregulated the food industry has become.

The widening scandal over mislabelled horse-meat has affected at least 12 European countries, including Switzerland, where the retailer Co-op - famous for its broad range of organic, locally-sourced food - was on Monday forced to remove nine different products from its shelves.

Last Wednesday, the company said it had found horse-meat in its own-brand frozen lasagne produced by the Comigel food processing company in France.

The French government revoked its licence last week over suspicions that Spanghero knowingly sold horsemeat labelled as beef, an allegation the company rejects.

The French authorities said that unwitting workers should not be penalized.

As a result the firm will be allowed to produce minced meat, sausages and ready-to-eat meals, but not to stock frozen meat.

Meanwhile the UK and Germany have also both pledged to step up testing of frozen food products.

Krishna Kalki replied to the discussion 'WARNING ..Important Message From Extraterrestrials...SAY NO TO TEMPERATURE MEASURING GUNS AND NO TO MASKS'
"Like Sandra said there are a lot of wrong people in the government ...corrupt as hell and so most…"
2 hours ago

1 darkstar replied to the discussion 'WARNING ..Important Message From Extraterrestrials...SAY NO TO TEMPERATURE MEASURING GUNS AND NO TO MASKS'
"Since when does the godverment have the right to tell you what to wear?  "
10 hours ago

sandra replied to the discussion 'The Powerful Galactic Federation Are Working On The New World Order...READ WHY'
"By the Way The Main Federation Council located in VEGA Starsystem! On so called Erth (SHAN!) exsist…"
10 hours ago