A news update about the Baltic Sea anomaly was published in the Swedish Newspaper Expressen. 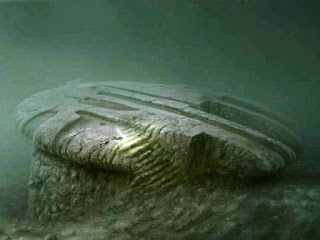 The circle in the Baltic Sea continues to perplex. New test results from Israel shows that a part of the circle is metallic - and researchers there think it is a metal that nature itself can not manufacture.

Swedish researchers say the opposite. It can be created in nature, but it has different conditions in different waters, says geologist Fredrik Klingberg.

In June 2011, the divers Dennis Åsberg and Peter Lindberg, a mysterious discovery on the Baltic seabed. Ocean X team found a circle with a diameter of 60 meters almost 90 meters into the sea. Previous test results from Tel Aviv has shown that there have been burnt organic material on the circle.

Now, the new test results from another part of the circle. Result from Israel shows that the bit is metallic and contains limonite and goethite.

Professor Dr. Steve Weiner of Israel says to the divers that there is a metal that not nature can produce itself.

-I do not know what to believe anymore. The response from Tel Aviv, the object that we found a metal that is designed, makes you get goose bumps, says diver Dennis Åsberg.

Swedish scientists have a different view.

Limonite and goethite close to hand with the BOG-IRON ORE. For me, this could be nodules, they are in many seabeds, says Fredrik Klingberg, a geologist at the Geological Survey of Sweden.

Martin Jakobsson, marine geologist at Stockholm University: -It is not at all surprising that you found those subjects, nature can produce it itself, he says The divers also found the stones of granite lying on top of the object and received information that indicates that the object has been there for 14 000 years.

-Then it could be done by people in the past. Before the Ice Age low was a lake where the Baltic is now and the subject is on the coastal strip, said Dennis Åsberg.

Martin Jakobsson think this sounds reasonable. -I have said it before and are still clinging to it - it seems to be a geological objects that had lain there for long. Ambiguities about the mysterious circle makes scientists skeptical.

-I am very skeptical about the whole thing, so difficult, it should not be that hard to find out what it really is. One can make such documentation at that depth, says Johan Rönnby, professor of maritime archeology at Södertörn University.

Dennis Åsberg agree that it is mysterious - but says he's happy to receive help to find out what it is. All are welcome, they are welcome to come down and dive here. We can not do it, we do not have the resources required, he says.

We Are One commented on the blog post 'Warning: This is the red pill. You can never go back to the illusion after viewing.'
"Not Really."
2 hours ago

Love and commitment are the essence of creation.

Love and commitment are the essence of creation.The Council: If you are fortunate to have someone…See More
3 hours ago
0 Comments 0 Likes

Valana commented on the blog post 'Grand kids of JFK singing Timber - It’s going down!'
"Pet Rock, are they singing to the Country or to the deep state? I'm trying to figure it…"
6 hours ago

The Deep State - A Documentary