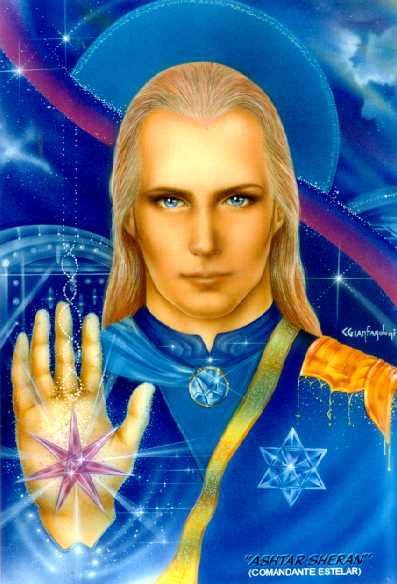 "I am Ashtar Shéran ! It is with pleasure that I have yet to speak to you today.

Of course this transmissive , this child of Light, is very difficult to accept that it was me that actually communicates with it! Somehow it is to his credit because it does not want to be abused. Be assured that I do not believe ! I really am Ashtar !

I just tell you this: I know that many Lightworkers, many who have voluntarily accepted the incarnation on Earth to accomplish their mission began to be sad, anxious , because nothing happens , because everything is too long and they lose confidence.

Me and my brothers in the great ship Star Celeste can understand , but we still ask you a little bit of patience. Put that time to good use patience to refine what you are.

You know that I speak the truth as you see more of what you call ships , you will see several forms , you will see balls of light , and you will increasingly feel that any approach now large, very great changes are at hand .

This year should be a key year, the year of revelation , the year when many beings wake up as if sleep was completed and will be reconnected to their reality. This year , many things will change.

We are demonstrating more and we'll tell you this: many Lightworkers we will ! Some of them will see a much larger and very bright star in the sky , others see as the channel and saw our friends, large spheres which are vessels of Light. It will wait for them and as if to say : "We are here We are present in your sky We have never been so close to you, then have another little patience ! "

Your world ends! Your civilization ends! He is preparing a new cycle in which humans live completely differently , where men will be freed from the yoke of domination where men believe in brotherhood , joy and beauty .

I put you on guard against : Beware the illusion , the illusion that attention can create your desire ! Just be careful!

I , Ashtar , I will be more close to you. More I will guide you through sincere and pure channels. More I warn you of crucial moments that you have to live. This is your reward for waiting that seems endless! However, when I warn you , I will not do that through a single channel as a single channel is not necessarily credible ! While I was talking to some future events to our current transmissive , it does not return because it would not have confidence in the reality of what I said to him .

By cons , if more intuitive people , whether canals or other , receive the same information , you will know that it is credible, that is the reality, and you prepare completely ! You prepare yourselves , you prepare to deal with what you have to live !

You will be warned! It's the least we can do because you have worked for years and years with courage, selflessness and love! This is the least we , your galactic brothers and I , Ashtar , can do for you ! We will not say that it is a reward , it is only the just reward !

So do not worry if some events begin to occur , you will see us , you will feel us more close to you ! The time is not yet quite there , preparations are still in terms of the invisible , many things are taking place because some energy must leave this world, willingly or by force! When I talk about energy , I also talk about non-human or even human bodies !

Today, early this year, I came to give you confidence and also so that you still have a little patience. Everything happens , but also you have to understand before we can live in wholeness, there will be difficult times. I do not say only for you who hear me , I say to the world in its generality.

The major changes are often in pain , but they are often necessary to go to whatever you want so long. Life in this world can not continue as it is! Humans have done wrong ! We have warned more than once and they did not listen , because they were recommended by other energy sources (I prefer naming energies).

We could be there twenty years or more , but we could precipitate certain events and therefore we would prevent a certain evolution in humans . It has been given extra time to a maximum of humans open a new awareness and prepare . Now this time is almost up ! Me , beings Command , and all beings that help the planet Earth will ensure that maximum beings still open !

Meditate on what was said and work on! Again know, Lightworkers, Starseeds, you are not alone , know that there are many of your galactic brothers who , at this time, help the Earth humanity. There are hundreds of thousands of vessels waiting around the Earth that you still can not receive because they are in the fourth dimension , which will manifest more and more to make you aware of their actual existence .

Everything that is hidden will be informed by our Light All will be revealed ! As you say , you are the period of the Apocalypse ! In the true sense of the word is the time of the Revelation ! Some revelations will result in suffering.

Again I tell you, be a little patient! Everything happens ! You are not far from the other side , but there will be times where a little obscure light can not penetrate and it will still pass !

I love you! Be brave and patient!

that you mention Monique Mathieu's name

"nothing can ever be mandatory. governments do not even have right to exist, let alone mandate anything

"I shouldn’t spend too much time on Twitter, but…

"I really hope they never get this off the ground...The Austrian parliament will have to pass some jiggery pokery, first..."

"The mandatory vaxx (IMPFPFLICHT!) hasn’t been officially approved yet."

"As I said earlier, all this will be challenged in courts...These baddies are going to jail....They are breaking Nuremberg code...Yes I posted vids on this blog and my other one, which could help anyone seeking advice from a lawyer..."
More…
Loading ...