Ø Thank you Google: The genetic code is the set of rules by which information encoded in genetic material (DNA or RNA sequences) is translated into proteins (amino acid sequences) by living cells. The human genome is the complete set of genetic information for humans (Homo sapiens). This information is encoded as DNA sequences within the 23 chromosome pairs in cell nuclei and in a small DNA molecule found within individual mitochondria. Human genomes include both protein-coding DNA genes and noncoding DNA. I stand to be corrected but I think we have 23 active pairs of the 64 possibilities observed.

Ø With reference to the below image, of frequency wavelengths in relation to feelings of hate and love; the top depiction reflects fear as being a low frequency which is slow moving and has the ability to activate very few DNA coding sites. Whereas the depiction below it reflects the high frequency, that love holds. Its wavelengths are short and fast and therefore it is able to activate many more DNA coding sites within the human body. 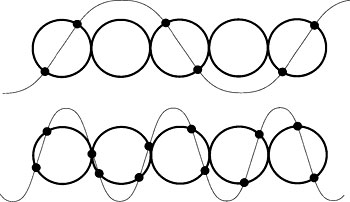 Ø The more details you are aware of, the better the brain remembers the memory. Could possibly mean that more detailed memories are further back in our subconscious, would that mean it could take longer to retrieve those memories…?

Ø Any force, which resists another, creates the need to be broken down, so if the purpose of life itself is to teach and human nature is to resist that which we do not know out of fear then life has no other choice but to break us down until we accept and understand what is trying to be taught.

Ø Love is not complicated, people are! Love is CONNECTION. Love is soft and enduring, in a state of love, it would not be possible to be rigid and therefore we would not resist anything. Peace very literally means that we must love ourselves in order to make the connections/activations and then follow the flow.


‘Hatred does not cease by hatred, but only by love; this is the eternal rule.’ - Buddha

Atoms rotate at one fixed orbit. Everything on earth contains its own unique structure of atoms. These precise structures create codes, which our consciousness then interprets it as what we know to be the physical matter in our ego’s perceived reality.

When an atom is heated – short fast wave lengths- its electrons leap from one state of orbit to the next within its own fixed orbits (this creates a bright strike of colour), this occurrence is the quantum leap.

Let us think of heat as ‘’love’’, we know love is the connection. To be in a constant and complete state of love our atoms are rapidly connecting all our DNA’s possible codes; this rapid leap away from the atoms in a continuous state of quantised electrons cause the heated propulsion of fixed orbits to begin flowing in unison, thus creating a rapid synchronised wave of energy. It very literally recreates and reconnects all streams of light; which if viewed from an alternative dimension could create the image of an infinite and steady river of bright light.

Electrons exist here or there nowhere in between. In the third dimension, only a certain amount of energy within an electron is quantised because it is still attached to the atom.

It could be that this partial quantum leap is a very strict and unchangeable divine law for the third dimension as a means of order between realms. This could be why time travel/ astral projection is used within the third and fourth dimensions. The quantum leap between realms would then be the most practical state/vessel/manner of transport for the souls light bodies to journey from one position instantly to another.

Quintin Smith offers a scientific view on Cosmological Laws vs Universal Metalaws, in his article Natural Explanation of the Existence and Laws of Our Universe (1990), for a better understanding of the science behind singularities which occur in the universe and how physics defines the fundamental laws each possible universe would uniquely follow.

It is in that unlimited state of potential energy which higher dimensional beings are freed from the laws which control the third and fourth realms. Being physical reality and the energy grids on which they are governed to exist on. This is so that only those with divine intent may enter the fifth dimension and have true access to light source.

These light bodies sustain immaculate and incomprehensible efficiency with the divine purpose. They are in place to safeguard and enforce the cosmic laws of all that is, will be and has been, ensuring that the scales of light and dark are infinitely balanced in each realm respectively and the sum of each realm as a whole.

As this is the true frequency state of love and unity, it is here that our most divine work in unison as one fixed of energy body, linking our cosmic placement with our co-ordinating/ neighbouring galaxies. Flawless codding and connections are made to sustain the ultimate infinite equation, which has all light energy manifestations safe keeping at heart.

Each cosmic universe uniquely governed by its own golden ratios and sequencing so that there is never a collision but rather an ordered system to which evolution must adhere.

This is why earth has been in contact with so many divine forces as of late, I believe we are experiencing an intervention in what we will come to see as an end of reality as we know it in order to restore earths balance and bring harmony to all of nature.

"Hi sweety, yeh, the forcast was for rain, but was mostly sunny with cloud, this morning...South East England...A bit of rain fell this afternoon, though....

"When Vash says hi, there’s something coming up. Something good. Just saying 😇"

We just had a cloudy experience across the channel ⛈ It was loud, with some serious thunder. But the sun is back now 🌤"

"Oh wow, oh wow....!! This happened a mere half an hour, ago...I left the house on foot and on route to my local health store, to get some organic seeds (pumpkin seeds from Austria,) and as I got to a road junction, looked up instinctively, at a very…"

"Oh wow, oh wow....!! This happened a mere half an hour, ago...I left the house on foot and on route to my local health store, to get some organic seeds (pumpkin seeds from Austria,) and as I got to a road junction, looked up instinctively, at a very…"

I am always sharing from my heart and soul and with great love and I feel so guided this morning to share with you, the face that with the New Earth, we are returning to the Omni Versal fold, where the Law of One is fully operational, and all adhere…
See More

We are One, there is only One, and yet the One constantly manifests Itself – the power and energy that is the One – in myriad uncountable numbers of sentient beings as expressions of Love.All of us, all life, all consciousness, all awareness, all…
See More
More…
Loading ...