Here's the latest update from Simon Parkes and this weekend's Connecting Consciousness show. He's got a new cat.

He mentions the latest Project Camelot video from Kerry Cassidy, ref. Charlie Ward. I have to wonder why Kerry is working so much with RDS lately. Based on how he has treated Sarah Westall, Dr. Katherine Horton, Kevin Annett, and myself, I won't listen to anything he has to say or promote anything he's part of. Once CIA, always CIA, from what I've seen.

Simon is telling us there are more "non-Human craft" coming into the Earth's atmosphere and things that look like asteroids, etc. that aren't. That is interesting considering the remarks I've mentioned recently from the Trump campaign events about "ships".

If you're new, we were told a few years ago that the "comet" Ison is not a comet at all, but a ship, as this photo seems to illustrate. 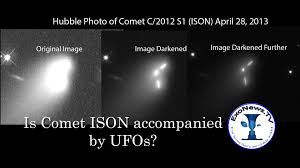 If I remember correctly, Rose of Yellow Rose for Texas channel told us she knows the captain of ISON.

Simon also says there are military exercises ongoing in Arizona, and that there are more tunnels in this state than any other. That's interesting considering all the fires nearby, some of which seemed spontaneous. A recent one may have been started by "homeless" people camped out on the state land nearby. I've spoken in the past about some other mysterious things I've experienced within a mile or so of my home that suggest there might be things going on "down there".

Simon's intel and perspectives are always interesting and he gets into the "military coup" scenario discussed above. He assures us the true US military are more than capable of dealing with the cabal's army they have recruited and trained (mercenaries) to prevent Trump from moving forward with his draining of the swamp, and the dismantling of the deep state systems.

President Trump has stated that it won't be a "transition" it will be a "continuation". Exactly---but that won't stop the satanic El-ites from attempting to interfere. Simon suggests it's a good idea to top up our stores of supplies in case we have a couple of weeks of disruptions to deal with in a few locations. Arizona is a battleground state, no question, and we're prepared.

Alan liked amparo alvarez's blog post COMING AT 7:00PM LIVE /THIS IS ALL I CAN PUT...IT IS NOT ALLOWING ME TO BRING THE WHOLE ARTICLE
4 hours ago