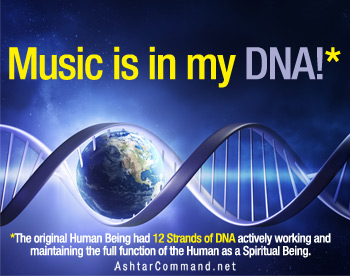 By Kate Spreckley
For years science has recognized that we have two active physical strands of DNA.  We also have a further ten energetic DNA strands which have been dormant within the Human Being for many centuries.  These dormant strands of DNA have been discovered by scientists, who not knowing the function of these strands, have identified them as ‘junk’ DNA.

Deoxyribonucleic acid (DNA) is a nucleic acid that contains all the genetic instructions used in the development and functioning of all known living things.  The main role of DNA is the long-term storage of information.  DNA is often compared to a set of blueprints since it contains the instructions needed to construct other components of cells.  The DNA segments that carry genetic information are called genes, but other DNA sequences have structural purposes or are involved in regulating the use of genetic information.

Our DNA is therefore our personal blueprint and as such contains all our mental, physical, emotional and Spiritual information.

The original Human Being had 12 Strands of DNA actively working and maintaining the full function of the Human as a Spiritual Being.  With our over preoccupation with left brained thinking and the closing down of our heart centers, these ‘extra’ DNA strands have been lost.  The consequences of this loss are that we live in a spiritually deficient society and our intuitive and healing abilities have been hugely reduced.  It has also resulted in us only accessing and using a very small part of our brains.

The human body is the most valuable thing we will ever own.  It stores and holds a wealth of information, wisdom and knowledge on every aspect of ourselves, our world and all of life.  Combinations of intelligence are stored within the Human and a great amount of data is stored inside the body.  Inside our bodies are the formulas required to replicate other forms of intelligence throughout the Universe.

At conception, we receive, from our two different bloodlines (our parents) certain matched and paired recessive genes.  These genes hold light codes that give us the highest opportunity for accessing and developing our Spiritual abilities and for healing the damaged and wounded aspects of our Soul.

At the same time these genes hold memories which have created blocks to our path to oneness and initiated our deep-rooted feelings of separation, separation from our true essence and our Creator. This memory of separation has forced us to created experiences and situations where we are given the opportunity to heal ourselves, our world and our separations.

As a Soul we carefully picked and chose our parents and their bloodlines in order to facilitate experiences and situations that will enable us to heal ourselves.  We have therefore handpicked our own DNA structures and the possible opportunities to activate and awaken further strands of DNA.

The energy of our Earth is moving through major vibrational shifts and into higher levels of consciousness.  As the Earth raises Her vibration, we as Human Beings are being given many opportunities to raise our vibration.  This shift is being referred to as the Ascension and there are many people around the world who are experiencing confusion and chaos in their worlds.  Yet in this seeming chaos and confusion lie great opportunities for us to grow, expand and evolve.

One of the most exciting aspects of our evolutionary process is the retooling of our DNA.  Cosmic light encoded rays from our Creator have been coming into our Earth stimulating change and reordering our Human bodies.  As the light encoded filaments are absorbed into our being our scattered DNA is being activated and reformed into new helixes or strands of DNA and being reordered into bundles.

As this rebundling and reordering progresses we create a more evolved nervous system that facilitates new information and data to move into our consciousness.  Many of our dormant brain cells are being awoken and we are being able to access our full body potential.  As our bodies fill with more light so our memories are opened and we evolve as our DNA evolves into conscious Multidimensional Beings.

Our 12 strands of DNA activate and connect to our 12 Chakra points, energy doorways through which we access our Spiritual heritage.  The 12 strands of DNA serve as links through the 12 chakras to the energy web outside of our bodies.  The 12 chakras act as energetic doorways into our body connecting us to the vital forces of existence.  It is through opening and activating these portals of energy that we can begin to truly know ourselves.

As all 12 strands of DNA are now forming, whatever issues we have not dealt with and peacefully cleared in our personal history, will create chaos.  Feelings and memories are emerging offering us an opportunity to experience the fabric of our being and revealing who we are through the events and beliefs that are intricately woven into us.

Our task is to awaken, activate and unite all 12 creating the spinning of the 12.  This spinning of the 12 strands of DNA and 12 chakra points will draw to us energies that will intermingle and move throughout our beings activating and awakening the many different aspects of ourselves.  This will trigger new versions, understandings and meanings to all the events in our lives and our world.

Our 12 chakras are collections of energy where events can emerge.  They hold memory and identity and each corresponds to a strand of DNA.  These 12 energy centers must be accessed from within where we can feel the data corresponding with and translating our experiences within the context of our minds.

By opening our hearts and minds all the answers to the great mysteries will be found within.  We are required to step out of our current belief systems and to create new belief systems as the mind is structured to evolve and form our experiences based on what we command.  Our mind is not our master; we are the masters of our own minds.  The mind is but a tool to be used to create reality and nothing more.

By consciously working with the waves of energy and light moving into our Earth, we are able to realize and understand that the transformation of this planet is based upon the healing and power of our minds.

Activating the full 12 DNA strands will create a connection between our human genetic coding and give us access to all knowledge and wisdom.  This is the awareness and understanding of who we truly are.

In activating all 12 strands of DNA we create an alignment within ourselves allowing us to gently shift into much higher vibrational levels and frequency of light, helping our ascension process by further awakening our human consciousness.

This article may be republished as is, with no changes made and all links active © 2013 Kate Ann Spreckley http://www.spiritpathways.co.za
This message was originally posted here
Views: 2393
Tags: dna
E-mail me when people leave their comments –
Follow