Guess who is this reptilian lady? Meet the new American Ambassador in Bosnia and Hercegovina

Her name is  Maureen Cormack, and she has huge diplomatic history.

Pay attention to the eyes. Have the same experiance with one person living close to me.

Person is awake and seems to fight the dark.

Apears to be bit confused and have ADHD diagnose.

It is nice to talk together so i hope we wil meet again soon.

Mikeil, the photo is from official U.S. State Department page, as Malcolm also confirmed, and I saw  the same photo in one of Bosnian top mainstream daily newspaper, so I pretty much doubt that it is manipulated. My guess is that the photo was taken in a shapeshifting moment. i did not say that she needs to be burnt at the stake, but I am uncomfortable at the thought of having her on such high position in my country. She could be "good" person (reptile), but as far as I've read about reptiles such are very rare.

WHY WOULD A STATE DEPARTMENT EMPLOYEE WANT TO WEAR REPTILE CONTACT LENSES?? TO HAVE FUN WITH THE ALTERNATIVE MEDIA MAYBE?? I don't buy it Mikeil.

Most people don't know squat about lighting and photography, so when they use that ignorance to in detail analyze the genetical composition of things photographed then OBVIOUSLY only nutty conclusions can come out of it. ;)

Malcolm, Yes, I have seen these and many other videos hundreds of times. I am not saying they do not exist. They do. But also a rare condition exist called cats eye syndrome and Glaucoma both can damage the pupil and cause slit appearance. Or these individuals can be hybrids as well.(?) Cats have vertically slit pupils, too. Is there a cat-like alien species? Some people say, yes. Could it be a shape shifting reptilian? -Absolutely. It could be many things. All I am saying when I don`t see the light reflection around the pupil coming from BOTH ways, then there is no doubt something is really out there. But to shout ` it is a reptilian!!!` at every individual who might have different eyes is just harsh. I agree. The problem is why would George H.W. Bush want to cover up his eyes (to make them look "friendly") as opposed to showing his eyes for what they really are???

CNN close-up of eyes.  Click https://www.youtube.com/watch?v=Eaaubr3nnHI for CNN debate video with Bill Clinton; CNN will not release this video for debunkers. 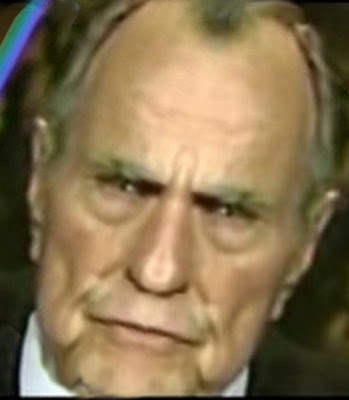 I've seen this effect in photos with many people and they are not reptilians. It has something to do with the lighting, either the flash, the lights in the room or a combination of factors.

I have also seen true reptilians in person and their eyes are like that when you meet them face to face.

We humans have reptilian DNA in us, so I think that's part of it why even normal humans get this effect in photographs.  Has anyone else on this site, besides me, seen a Reptilian in person and if you have, have you noticed this eye structure?

Also David Icke once told me about an experience he had when he met a Reptilian in person and their eyes shifted from normal to this cat like eye and it was not during a photograph or due to lighting in the room.

The woman in the photograph has dilated pupils like she's on some heavy pscyhedelics or something on that line.

Lighting does not change a round pupil into a reptilian slit pupil.  Here's an untouched photo of Ted Kennedy, in natural light with no flash:

This is an un-touched news photo. The staged lighting would never create this slit eye effect especially at this angle.

Krishna Kalki replied to the discussion 'Those Beings Who Drink Alcohol, Smoke, Take Drugs, And Eat Meat Are Third Class Beings On Planet Earth'
"In vedic terms they are classed as demonic in nature "
1 hour ago

Valana liked Valana's discussion tHE REVELATOR SPEAKS ON "HOW TO RECOGNIZE FALSE CHRISTS:
3 hours ago

Drekx Omega replied to the discussion 'Russia Celebrates Victory Day Over Fascist Evil...2016'
"The Russia theory as to why Populism is popular, everywhere..? LOL"
6 hours ago

Valana replied to the discussion 'tHE REVELATOR SPEAKS ON "HOW TO RECOGNIZE FALSE CHRISTS:' in the group Cmdr. Val Thor: LIVE
"The words of the Revelator have now been posted."
8 hours ago