Remember: If you can’t tune in at this time you can listen at ANY time that’s convenient to you, once the show has gone to air. Just click on this same link.

Nineteen year-old Pleaidian Walk-in Wes Annac proves age is no limit to a sound grasp and understanding of Earthly life, channelling, our Galactic family and our upcoming Ascension when he joins me on The Light Agenda this week.

Wes is the youngest speaker on the list of 12 insightful international and local speakers who will be speaking at the 2012 Scenario Conference Sedona – Preparing for Ascension in October.

And if you don’t know much about this exceptional teenager, then you’re going to once you listen to our interview. I may be 51 going on 21, but Wes is 19 going on 1019!

His intelligence, knowledge and ability to express extremely convoluted concepts of our universal connectivity and our future Ascension leaves many old spiritual scholars in the shade.

Wes runs two blogs: the news site – aquariuschannelings.com; and also a personal blog, where he showcases only his own callings – wesannac.com

He is a Pleaidian walk-in – which means his soul was replaced by another during his life as part of his life journey.

If you are a regular reader of the 2012 Scenario then you are likely to know this gifted young man channels the Ascended Masters, SanJAsKa, the Pleaidian High Council, the Pleaidian Council of Nine and the Hathors of Earth’s Solar Astral [Planes].

He writes a monthly newsletter to all those who subscribe for just $11.11 a month.

And together with his fiancee, Brandy, he has a young son, who will be three-years-old next month.

As you’ll find in this 90-minute special, Wes Annac has led an extraordinary life – and he is really looking forward to sharing his journey towards Ascension at the 2012 Scenario Conference Sedona – Preparing for Ascension next month.

You’ll hear how he knows that his ‘walk-in’ gradually began replacing his ‘walk-out’ soul from around the age of three and slowly, bit by bit, the two kept integrating until he was 16- when his own young son, Andrew, was born.

His walk-in remained the sole soul; Wes was just 16.

But in between that, both soul’s took a tough path.

Wes’s life includes a traumatic and difficult period few of us would want to live through – his older step-brothers used to instigate what they jokingly called ‘torture time’ – only this was real. Their ”fun” included holding the young Wes down while they dropped heavy objects onto his private parts and holding him down while they forced his eyes open and made him watch extreme and violent pornographic and uncensored films.

He was eight when this started and around 10 or 11 when it ended. Despite writing about this episode of his life recently, it remains a particularly difficult thing for Wes to talk about even now; but he wanted to share it with me – and you, the listeners. He feels it may help someone else; it may also help him by talking about it.

You’ll also learn of the joy he felt when his young son arrived – and he has some thoughts to share with those who may feel teenage parents aren’t competent; no one can deny the love Wes has for his own son and his fiancée.

He also reveals that he will be using our interview and his role in the upcoming 2012 Scenario Conference Sedona- Preparing fro Ascension to finally tell his parents about his spiritual life and his current role. He also expects to use the interview to finally bring up the issue he has never told his parents:  about his brothers’ torture. He also plans to then confront his older step-brothers about the impact their actions had on him, for the first time.

Wes and I also talk about his channellings: how it all began and how, at 16, he was involved in a large online discussion group, which is where he first realised he was both a walk-in and discovered his incredible channeling abilities.

He also reveals his strong connection with Archangel Michael, who has taken him on many Lighted rituals and who took him to the Ascended City of Acclipthys, which Wes will tell us all about in detail.

We will talk about how isolated he feels where he lives as he feels he has no conscious Lightworkers to share his life journey and continuing path towards Ascension with – other than Brandy and his son.

Plus, we will talk about the new technologies soon to be ours; meditation and guidance; Disclosure – and the InLIght Radio video I Know My Galactic Family is Here – Do You?  as well as Ascension

He will also talk about why he willingly accepted the role of being the youngest speaker at the upcoming 2012 Scenario Conference Sedona – Preparing for Ascension.

Finally, he performs live in the studio a song he wrote and which he will perform himself especially for The Light Agenda . It’s called Ode to Humanity (lyrics below) and I think it will resonate with all of us long after the show has ended.

You can also check out all the InLight Radio shows at: http://www.blogtalkradio.com/inlight_radio

To support Wes Annac, read his channellings and subscribe to his monthly newsletter head to Wes’s news site http://aquariuschannelings.com or his personal blog http://wesannac.com

Ode to Humanity – Words and Music By Wes Annac

We lost ourselves in a human daze

So engrossed within our human ways

We didn’t see what we were doing

Living stress-free among the ruins

of a distorted perception

It Lives within us

And it goes unnoticed

The west becomes a place of sin

For the eagle loves competition

We play into the hand that feeds

Provides us with all of what we think are our needs

All of our greeds

Of a distorted perception

It Lives within us

And it goes unnoticed

"Maybe people would also donate something? Clothing, medicines, bandages, food, toys for children... now everything that is still useful and may be needed. Can you leave it back on earth later?"

"Look the Video down here. He speaks of the so-called Society. Whoever lives in this society must abide by the rules. Anyone who does anything against the Society will be punished. The maximum punishment is then that the respective consciousness…" 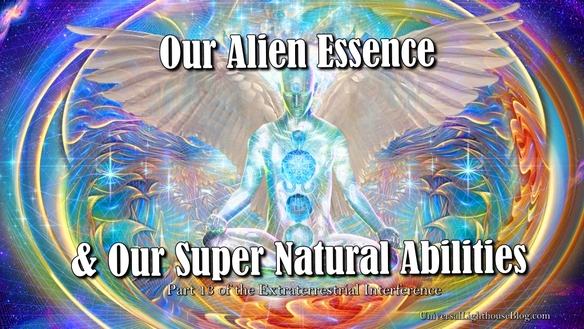 "Because the Joe Biden regime has hit the heights of Bolshevik-style mania, becoming the most far-left "presidency" in American history, many Americans are escaping socialist California and moving their businesses to Brexit Britain, where we offer a…"
More…
Loading ...