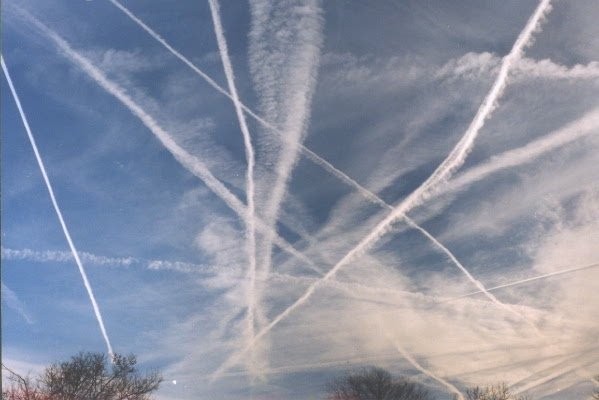 There has been much confusion surrounding chemtrails, since the 1990s...Much speculation as to their purpose, and even if they are real or not ....

And much tittle-tattle has been generated within establishment scientific circles to debunk them, and dismiss them as nothing more than standard contrails from planes at high altitude...

Of course, many serious observers still note that there is a marked and sometimes unsubtle difference, between brief- duration contrails and much longer duration chemtrails, which are often doodled and grid patterned by commercial planes, rendering the sky a chequerboard spectacle. A sky filled and pollution, blantantly there for all to see.. a display of elite arrogance, but often not raising the eyes of many, who simply believe in what governments and "experts" say....That there is nothing there to worry about, as they are but contrails..

Some conspiracy speculators have even suggested that chemtrails "rain bacteria and viruses down upon communities," little realising that a far easier method would be to infect drinking water or food supplies, if evil minds were intent on such actions at high level...and I'm not saying they don't do this, but they don't need chemtrail systems to deliver such toxins.

So why are these patterns airborn...? What are the PTB afraid of...? Is it part of their "global warming" tax creation scam..??

Truly, chemtrails are not benign at all.....And they are the acts of desperate power brokers, loosing control over a changing humanity, world-wide.

In a nutshell and as simply summarized as possible......:

(Aluminium strips are also used to deflect radar waves to enable military stealth and aluminium sheeting can be used to cover sensitive components aboard satellites in orbit, reflecting cosmic and solar rays, back into space.)

So, if the dark elites did not lay their sinister trails, the light-coded cosmic and solar rays that are arriving on earth would continue to transform 2-stranded DNA to 3-stranded and ultimately lead to 12-strands. So this a bizarre attempt to prevent natural incoming rays from activating light-encoded fillaments within Human RNA/DNA.

These activational aetheric level (above plasma) cosmic rays are causing positive mutation within human DNA, which is raising human consciousness and taking the human race out of the control matrix, which has existed for 13,000 years. The PTB are desperate to keep control, but are failing to do so, and thus using other methods also, to smash human DNA, such as swine flu vaccines, as well as full body scanners in primary international airports…the TSA even proposes to terrahertz people on trains..under DHLS mandate....This clearly demonstrates the frenzy that the elites feel..as the cover stories are rapidly becoming theadbare...   :-)

I advise air travellers not to travel, in order to avoid being subjected to harmful terrahertz waves, as these can unzip precious DNA..which is the secret intention behind forcing passengers to "opt" for the full body scan..

So like Chemtrails..... Full Body Scanners in major airports are secretly designed to destroy DNA, but not just to cause death, sterilisation and cancer, but mainly to prevent the emergence of Galactic Humans, or NOVAMEN.....the next step in human evolution and not controllable (by the PTB) within the current constrictive matrix, which is falling appart as we speak.

Hopefully this knowledge will aid your insights...I do not post this to create fear, only to illume minds..

I bless you all with Sirian love.... 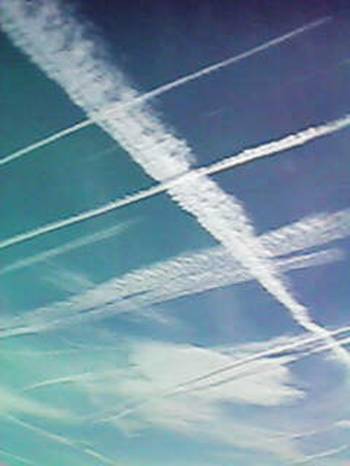 "I like this German language video.....If you can't understand it, just enjoy the film footage of a variety of beamship types....

Subtitles provided, but keep your eyes on the ships....

"The earthquake in Syria and Turkey was caused by weather modification. This is why the earth is not a safe place to live yet and space is also weaponized in astral, mental, etheric and physical the Light Forces are doing all they can to dismantle…"

"It is coming from the Pleiades (SUBARU) Starsystem.
https://youtu.be/n36KOqbwrMY
https://de.wikipedia.org/wiki/Datei:Subaru_pleiades.jpg"

"this considered to be the clearest UFO photo ever released (September 4, 1971, Costa Rica)
https://setecresearch.com/setec-news/f/this-is-clearest-ufo-photo-e..."

"The numbers of Victims after the earthquake in Turkey rises to 11,000."

Extraterristrial Minds …One To Check Out