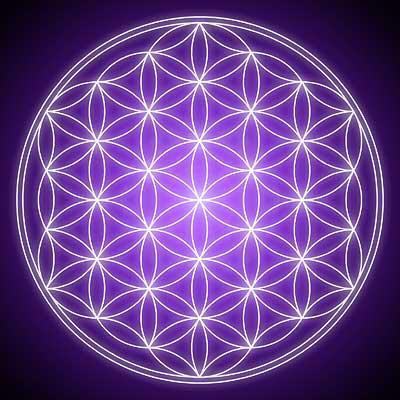 The Flower Of Life

I wrote this article only after I conducted a private poll of everyday ordinary people (30) and simply asked the question "Have you ever heard of The Flower Of Life?" Of those included in the Poll only a handful (five) had and of those only two could accurately describe what it is. I was more than a little taken back by this and decided that I should write an article that described exactly what it is.

Without exploring the more profound aspect of this symbol, I set about just keeping to the facts and what is more commonly known. This symbol that not only describes the cycle of life but includes sacred geometry, known as the Platonic Solids. It also includes the Golden Ratio or Golden Means by showing the Vesica Piscis.

I also found that it in essence includes 22 circles of various sizes, 19 of the same radius and three that encompass the entire shape as well as one shape embedded in the overall design. As many of you may know the Pythagoreans held the number 22 as a sacred number as it relates to our DNA and musical theory, what is known as the Infinite Harmony.

It has two embedded designs that pertain to our spiritual enlightenment the Seed of Life and the Tree of Life, which describe the cycles of all life. The Platonic Solids, also included in the design by connecting straight lines to the points where the circles cross each other, are known as the building blocks of our Universe.

It is a relatively short article (less than 1,500 words) and simply describes the basic facts, for more on the subject one can go to Amazon.com and purchase The Secret Flower Of Life by Drunlavo Melchizedek parts one and two.

What this article really shows is that our ancient ancestor were much more highly sophisticated intellectually and spiritually than they are given credit for and that a certain amount of esoteric knowledge has purposely been with held from our education system.

"I think I understand the difference now. Devas, angels and Elohim are beings that don’t live in the same ‘universe’ as humans and ETs. This parallel universe isn’t the same as the astral world or another dimension, is that…"

"It is important that we understand and know that we are not alone in the universe. We have Brothers and Sisters out there. The Word Alien is really mean. I woud never call anyone a Alien.
Today i wake up with this Song in my Head, wich i dream…"

"I always believed in ‘fairies’. They are probably smaller devas that maintain the energy of plants and trees? What about ‘orbs’, are these devas too?

I think I understand the difference now. Devas, angels and Elohim are beings that don’t live in…"

"😁The delightful Elina Bakunova describes Russian's habits and customs, in social and public settings....
Just like we British, Russians enjoy plenty of tea and drink it whenever they can....🇷🇺 ❤️🫖🇬🇧