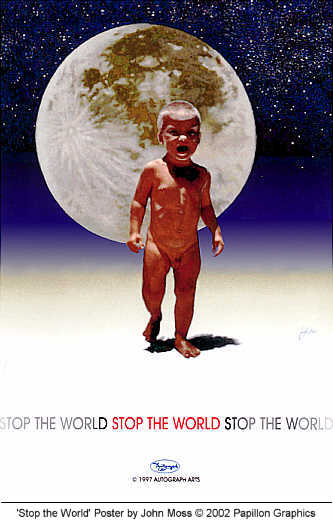 I’ll say it again, because it always bears repeating…there was no shortage of help available for me…all I had to do was ask and be open to receive.

This time, the help arrived in a well-known and loved package that eerily resembled my six-year old son. OK…it WAS him…but it sure didn’t FEEL like the “him that I know that he is.” In fact, this pseudo-son even infected the other children in his immediate surroundings, as if they were all in on some sinister plot to destroy the calm,
cool, centeredness that the Earth Mother was struggling so hard to maintain. Fortunately, there was a loving husband on the scene who realized the rawness of the Earth Mother, and set into motion his
own thankless role of Being the Bridge.

This is where a picture is worth a thousand words, but since I am not adept at art, I invite you to imagine two worlds connected by a beautiful, bright, bridge…Fear World, full of Hate, Fear, Suffering, and Separation, and Love World, the all-encompassing visionary utopia, comprised of Unconditional Love. There, you’ve got it!

Now, imagine Earth Mother straddling the bridge, one foot firmly planted in each world, and…she can’t see the bridge. She is confused, laid waste by the lashings of the Fear World and desperately desiring the comfort of the Love World, yet unable to fully make sense of either.

She’s known both worlds well, having created each one, yet somehow; she has found herself unable to distinguish between the two.

So it is that the bloody battle ensues inside the Earth Mother, with great gnashing of teeth and searing swords of words followed by serene supplication and divine dispensation of the experience to be embraced. Duality at its finest, I’d say. While this whole process seemed like an eternity, it really only lasted about three days. And what a ride it was!

Finally, the ride operator changed gears and brought the great machine to a gentle stop. As I emerged, still a bit woozy from the topsy-turvy nature of the Dare Devil Duality Derby, I found myself surrounded by the most amazing gifts…not the least of which was a beautiful family magically transformed back into the “them
that I know that they are.”

Gratefully reuniting with my loved ones, I was amazed at the fire burning within my being…brighter than before I set foot on the ride, it called my name and whispered:

“For well you know and now you see

The ones who stand in front of thee

have carried the greatest gift of all,

the choice, of course, to rise or fall.

The world that you so wish to see

shall only come with firm decree,

to hold the other inside your heart,

as if the two were never apart.

Only then, as you well know,

The Love of Love inside will grow.”

WHERE TRUTH COMES FROM

While this truth of my own has been vetted with validation in the outer world, these precious pearls came forth from deep within my own
being. What a rare and treasured gift is
the wisdom from within when it is allowed to breed, blossom and burst forth untainted
by the outer realms, only to resonate with the world upon being revealed.

To some, this may seem a bit of a contradiction for, while it is true that wisdom comes from within, it is also true that sometimes wisdom
from within obtains its spark from wisdom without. There…hope that settles the confusion.