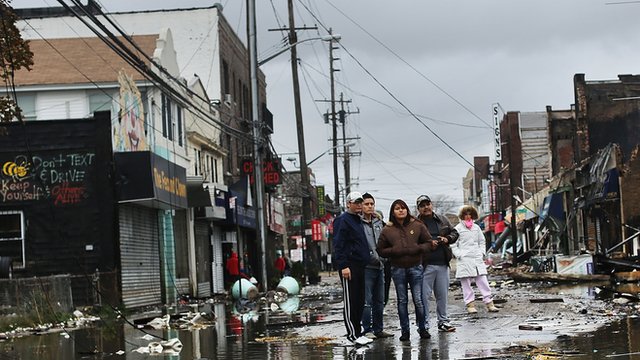 The group behind Occupy Wall Street is now turning its attention - and its assets - towards helping those hit by "Superstorm" Sandy.

The Episcopalian church at 520 Clinton Avenue in Brooklyn, New York, is packed - not with parishioners, but with supplies.

Boxes of nappies and baby wipes stand 10-boxes high, stacked underneath a stained-glass window depicting The Virgin Mary and the Christ Child. The transept is filled with empty plastic fuel canisters and industrial-sized mop buckets.

These items were all donated to Occupy Sandy, the latest iteration of the Occupy Wall Street movement.

The group is also one of the leading providers of storm relief for beleaguered areas in New York and New Jersey still suffering the effects of Sandy, the weather system which came ashore in October.

When the storm hit, some members of the original Occupy protests who had kept in touch suggested organising a relief effort.

"Within 24 hours we had our first hub in Red Hook [Brooklyn] and a 40-person volunteer meeting, and after that it exploded exponentially." 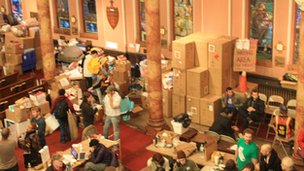 Supplies are delivered by mid-day, but new donations keep the church full

Members participate in weekly conference calls with the Federal Emergency Management Agency (Fema) and other leading relief groups, and work with more established organisations to hone their skills.

The Church of St Luke and St Matthew in Clinton Hill and the warehouse in Red Hook serve as distribution centres for volunteers and donated supplies. Volunteers rely on reports from the individual communities to determine needs, then send out those requests on Twitter and Facebook - for instance, asking for gluten-free or diabetic food, or requesting volunteer services of mechanics, construction workers, or medical professionals.

Other groups are certainly involved in the relief effort, and are mobilising through social media and the web - among them Rockaway Relief, which describes its members as "local New Yorkers working in tech, design, fashion, restaurant, entertainment and hospitality".

But Occupy's re-emergence appears to be something of a triumphant second act for a group that seemed to have faded away.

This time last year police removed protesters from the Wall Street park where they had camped for almost two months, and cold winter temperatures drove the movement's other outposts indoors.

The movement didn't disappear, but it did dissipate.

"There were a lot of working groups that were pursuing their own projects. Some were more galvanising or visible than others but for the most part they had trouble sustaining the verve and the forward motion they established last fall," says Todd Gitlin, a professor of journalism at Columbia University and author of Occupy Nation: The Roots, the Spirit, and the Promise of Occupy Wall Street.

"They didn't spark into anything vivid until the storm. Then they rose to the occasion."

Getting the word out

How Occupy Sandy uses the web

Storm relief proved to be an ideal fit for the systems and values Occupy created in 2011. Though the original protests were directed at banks, they also celebrated the notion of the 99% - the idea that the majority of Americans were in it together, and that individuals could band together to help one another.

"It's still about empowering individuals against an aggressor, it's just in this case the aggressor is easier to agree on."

Disaster relief was also was a good fit for the Occupy infrastructure.

"We've spent the past year painstakingly developing this network of people across the country who connect around issues they care about," says Michael Badger, who worked closely with the development of Interoccupy, which sought to connect the various "Occupy" protests around the world.

He says the web tools Occupy developed to facilitate conversation among the groups lent themselves to mobilisation after the hurricane.

"Right when Sandy hit, immediately it wasn't just the New York group that was activated. We have people in Amsterdam, in Los Angeles, in Kalamazoo working on this."

The Interoccupy.net website became a crucial aggregator and broadcasting system for the thousands of pleas for help on social media.

"The movement is extremely adept at using social media to mobilise activity. They've proven themselves with Occupy Wall Street, and it's something we've seen with being able to redirect volunteers in certain areas," says Tricia Wachtendorf, associate director of the Disaster Research Center at the University of Delaware. 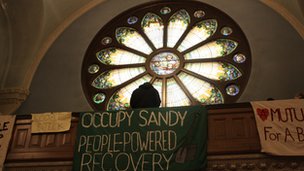 But she warns of a steep learning curve for emerging groups when it comes to disaster aid. For instance, more seasoned groups have learned that clothing donations are a big waste of time and resources after a disaster - the clothing is of disparate quality, it's difficult to store and organise, and it can attract mice and insects.

It is a lesson Occupy Sandy seems to have learned - the group's tweets repeatedly remind viewers that clothing donations are no longer accepted. But at the Clinton Street location, there are still piles of clothes that need sorting, and people who show up with bags full of old clothes.

Still, their model allows anyone who wants to help a chance to get their hands dirty.

The group has hung a banner in the balcony of the Clinton Hill church proclaiming: "Occupy Sandy: People Powered Recovery."

"To be quote honest I thought the Occupy Wall street movement were crazy hippies. Turns out they are phenomenal in transforming communities," says Roz Mays, a fitness instructor who came to volunteer at the church.

"This is a home-grown community based organisation of people who just want to help."

While it may be more efficient for volunteers to donate money over other supplies, or to bring in professionals to do recovery work, the Occupy philosophy prizes personal involvement.

And in return, the people are coming to embrace a movement they might have once written off.

FW,really great pics, made me lough a lot. And it does make you wonder ,especially the ones were the animals should have been enemies but they are bonding instead, think we could get humans to act like this and stop killing and hurting each other. Maybe we should give it a try, it couldn't hurt. I think we need to give more Hugs! Adonai

Nice,The vid me wonder if the animals are ascending now as well, seems to be some intelligence raising. Adonai

Richard Levison liked Krishna Kalki's discussion The Powerful Galactic Federation Are Working On The New World Order...READ WHY
2 minutes ago

Richard Levison liked Krishna Kalki's discussion WARNING ..Important Message From Extraterrestrials...SAY NO TO TEMPERATURE MEASURING GUNS AND NO TO MASKS
4 minutes ago

Krishna Kalki replied to the discussion 'BREAKING: Thousands of guillotines pre-positioned across America for left-wing terrorists to execute conservatives, Christians and Whites in the unfolding CIVIL WAR'
"The thing to do here is get some hand grenades and drop them of a plane to areas…"
2 hours ago

Krishna Kalki replied to the discussion 'WARNING ..Important Message From Extraterrestrials...SAY NO TO TEMPERATURE MEASURING GUNS AND NO TO MASKS'
"Well you need to be fast on the draw so before they put a gun on your head you put a gun on their…"
2 hours ago

Pet Rock replied to the discussion 'BREAKING: Thousands of guillotines pre-positioned across America for left-wing terrorists to execute conservatives, Christians and Whites in the unfolding CIVIL WAR'
"BREAKING: Black Lives Matter upgrades Rules of Engagement (ROE) to “shoot people in…"
17 hours ago