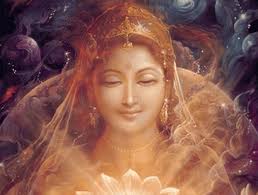 Every time I so much as think of the Divine Mother, I go up, up, up in bliss. So I have to find some occasion to write about her, for my own self-serving benefit – and hopefully your enjoyment.

Every Bible lover remembers that the Spirit moved upon the waters and all this came into being. This Holy Spirit was with the Lord since before the founding of the Earth. That which the Biblical prophets called the Holy Spirit, modern generations call the Goddess, the Divine Mother.

Ever was she with him. You could consider them Twin Flames, I guess. Certainly all twin-flame relationships hearken back to and are meant to remind us of the Original Couple. 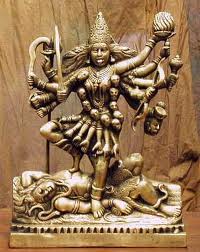 The Mother created the material world (Mother, mater, matter), maintains it, and transforms it when the need arises. She is the Creator, Preserver and Transformer of life. (2) She created it from love in a manner that is all but incomprehensible. The Divine Mother has explained it to me and I could not understand a word of it. Not enough processing power … yet.

This Holy Spirit built a world using universal laws that affect every aspect of life. They function to keep the divine spark, the child of God moving in the general direction of Self-Knowledge. Scenic detours accepted.

She created the seraphim and the archangels, the elohim and the elementals, devas, elves, fairies, cetaceans, and all the other life forms.

She designed a ladder of consciousness by which we could mount the steps back to the Divine Couple. 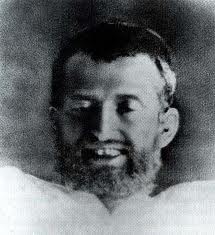 Sri Ramakrishna: Lost in the love of the Mother
We’re climbing that ladder, but some souls climb down to work with us. We call these “descents of God” avatars. At the core of each one – what makes them avatars – is the spirit of the Divine Mother. She incarnates in all avatars. Said Sri Ramakrishna:

“The Divine Mother of the Universe manifests Herself through this three-and-a-half cubit man.” (4)

She who is known as the Holy Spirit to Christians is known at the Divine Mother, Shakti, Kali, and Durga to Hindus; as the Mother to Taoists; as Dharma to Buddhists; as Royal Glory to Zarathustra; Sophia to the Greeks; and so on.

No, we cannot speak to the Father. Sorry. He lacks a voice. She’s the Voice in the silence, the Word of God. We cannot see the Father either. Sorry again. Any form of God we see is a form of the Mother.

Knowledge of her is indeed more precious than rubies, as Solomon said. In the face of the bliss that she bestows, all taste for rubies disappears. All taste for anything but her love and bliss disappears. Those that know her, like Sri Ramakrishna, get lost in their love for her.

(1) I hear Hindu readers saying to themselves, no, no, no. Brahma, Vishnu and Shiva create, preserve and transform life. I’ve asked Sri Shankara and the Divine Mother if I’m correct in what I’m about to say and both of them have said I am: Brahma, Vishnu and Shiva are names for the gunas: rajas, sattwa, and thamas. These are subsets of the energetic sine wave (AUM) that the Divine Mother is. Akar = creation; ukar = preservation; makar = transformation. The Mother commands the gunas. The use of gods to represent the gunas is simply a teaching device, useful in the Kali Yuga. Now I should run and hide under the porch!

(4) Archangel Michael in a personal reading with Steve Beckow, through Linda Dillon, June 7, 2015.

Views: 82
E-mail me when people leave their comments –
Follow