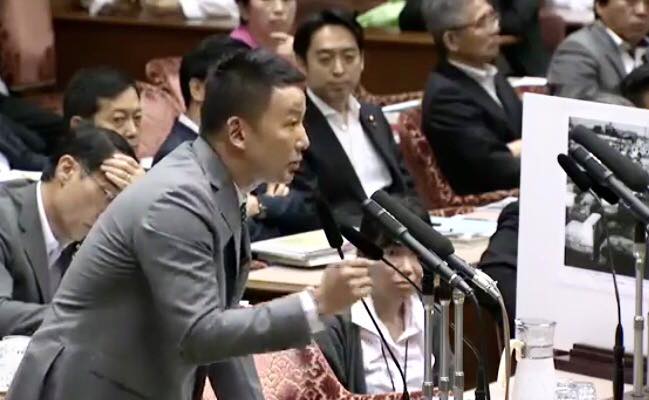 Taro Yamamoto begins his questions by requesting Prime Minister Abe to confirm that Japan will not act in negligence of the Geneva Conventions.
PM ABE states that international rules will be followed.

TARO YAMAMOTO: “Prime Minister, do you mean to say that Japan will not give support to the US military if an international human rights law has been breached?” “Do you not think that [a case example of an international law breach committed by US soldiers in Iraq] would naturally be called a war crime?”
PM ABE: “I can’t respond to something I don’t know facts about.”

TARO YAMAMOTO: “The US military has attacked mosques, tied up civilians including women and children, covering their faces with cloths and shooting them to death. They have occupied schools. The United States is a repeat offender of international rules.”
Regarding a case from Fallujah, Iraq:  TARO YAMAMOTO: “When Fallujah was under bomb strikes, all males over the age of 14 were deemed able for combat and were banned from leaving the city. Most family members were left unable to evacuate, and became victims of air bombs.”  Yamamoto listed several other war crimes committed by US forces, and questioned the PM;
“Can you give your support to such a US military?”

The Prime Minister repeatedly refused to answer questions regarding such incidents that he claimed no knowledge of, to which Yamamoto responded;
“Were you not the Chief Cabinet Secretary during the Koizumi Administration? Did you ever speak out in opposition against the Fallujah attacks?” “Weren’t the atomic bombs dropped on Hiroshima and Nagasaki also war crimes against international laws? Prime Minister, I need you to give me a clear answer. Can you not accept that suzerainties make mistakes?”

Foreign Minister Kishida responded with a theoretical comment regarding international laws.
TARO YAMAMOTO: “So if the US military breaks an international law, will our Self Defense Forces retreat accordingly?” “There is a huge chance that we would become co-perpetrators with the US forces.”

“The United States and United Kingdom are mainly the ones who have used weapons like white phosphorous munitions, cluster bombs and copious amounts of chemical weaponry. Even UN Secretary General Kofi Anan has described the war in Iraq as illegal. I am requesting for the establishment of a third party verification committee.”

Foreign Minister Kishida: “The decision would depend on whether these breaches were made by national political will, or individual soldiers disobeying orders.”
TARO YAMAMOTO: “Don’t waive your answers to the Foreign Minister! I’m questioning the Prime Minister. (Time for questioning ends) I am ending my questions with a request for the establishment of an investigative committee.”

"Geologist have their eye on Yellow Stone again but haven't seen the bison,deer running out of that area yet . Geologist already know that there are several volcanoes there and don't got the earthquake."

"ACC 10 years ago: Nothing ever happens!

She is a beautiful gifted singer and wonderful to hear her singing One of the best version by her @ https://youtu.be/iPHWR9-Y47YWatch this beautiful lady tune up church vibes and sings what's appropriate..and suits the church…
See More

"We now know that Twitter themselves, working with the intelligence community, worked to censor this story [Hunter Biden's laptop] and swing the election of 2020.”"

The Suppressed History Of Gaints And Their Reemergence Into The Public Arena ...Highly Recommended..No Joking  Well the GAINTS are waking up Watch @ https://youtu.be/nTcpDyC54BM
See More
More…
Loading ...