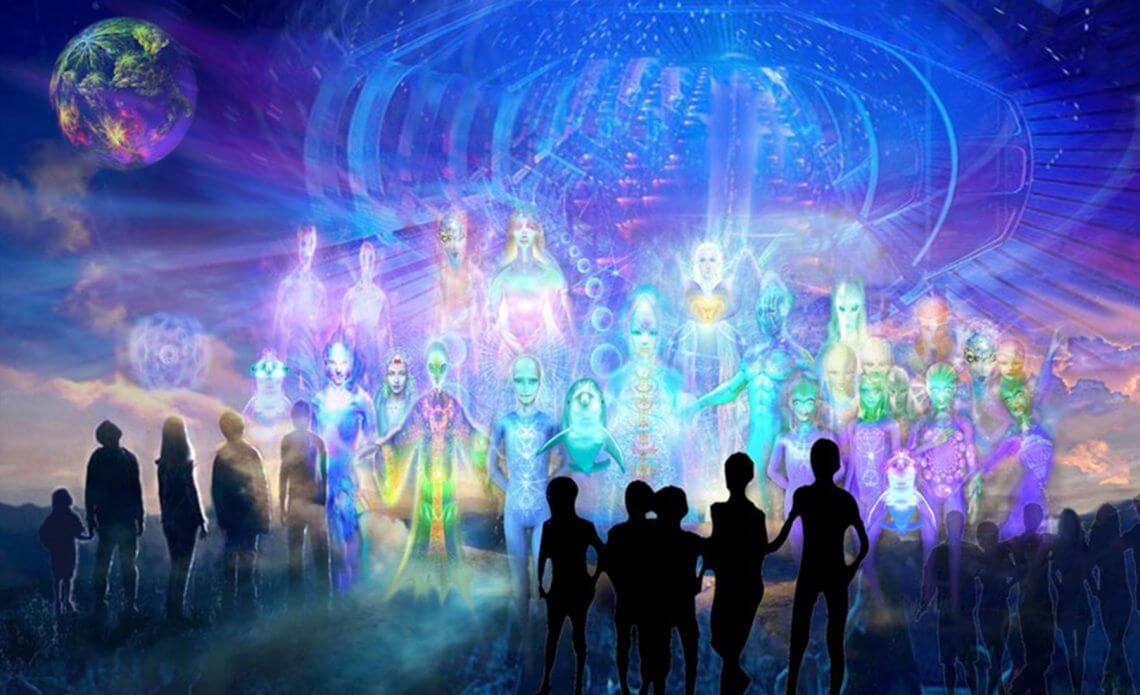 Before the caterpillar becomes the butterfly, it goes through the chrysallis phase where everything breaks down into a kind of mush. That’s the situation Homo Sapiens finds himself in right now. It’s dense, challenging, confusing, but entirely necessary on the path to the resplendent butterfly. And the being he is about to become, DIVINICUS, is truly majestic, 5D, multidimensional. For those that undertake this metamorphosis, you will find yourself be birthed into a Galactic Family of Light.

The Future is 5D

Yes these End Times are confusing. But for those with the vision to get above the karmic construct of the old 4D layer, future-landing-now is already looking bright and sunny. Those who complete this often tortuous journey will realise and remember that there is a vast family of souls out there in the cosmos, a tremendous mosaic of colourful beings, with phenomenal awareness and skills of co-creating with the universe. DIVINICUS is set to emerge into this family, reconnected with the natural cycles of life, drawing truly “free energy” through his being directly from the Universal Torus. 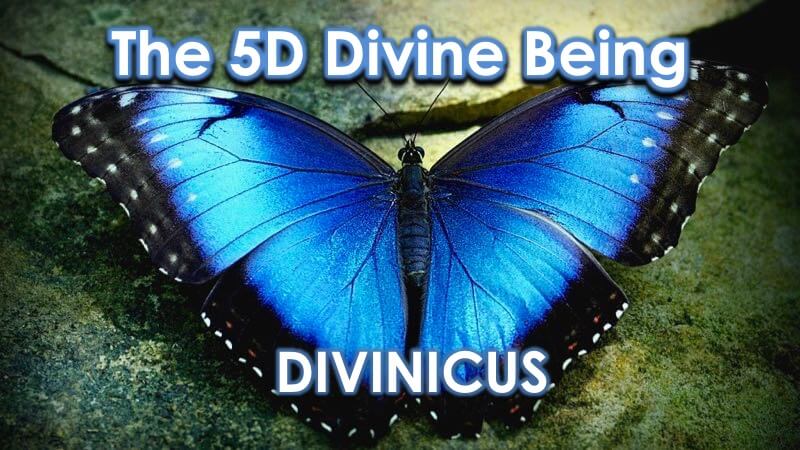 You’ll travel at the speed of thought; empathise and become as one with other sentient life; create abundantly without fear of resource limitation; feel cherished, nurtured and supported by the blessed hand of the Divine.

There’s plenty of work to do before this spectacular dawning. The shadowside has gone into overdrive – a desperate panic, one last ditch attempt to harvest as many souls into its agenda as possible. It will largely fail. Despite the fact that it appears to be succeeding on a broad scale right now, nevertheless, all fictitious time lines will converge to the Event, as Galactic, Solar and Earth Pole Shift cycles cleanse the old 4D layer away. You’d have to get out of the solar system to avoid it, and humanity’s physical technology is not nearly advanced enough, not even with enhancement by the Greys and AI. They need to physicality of the Human Body to draw energy from. But nothing that is 3D will pass through the completion of these grand cycles.

The future here is very much in 5D!

The Natural Cycles of Life: Death and Rebirth

Several ET groups are drawing close at these times. You can feel and communicate with them when you get beyond the 4D blocking layer. As you open out through it, inside your being, through the higher chakras, then you may feel them as a vibration, which then reflects as synchronicity through your outer reality. They communicate the vibration of love, of peace and acceptance, of numerology and sacred geometry. They’re expressing how to co-create with the universe and all sentient life, not to manipulate, control, harvest or surpress another. Even when they create the crop-circles, the crops are carefully folded, respected, not broken. This is their ethos.

Many in society are wondering about these Extra Terrestrial possibilities. The narrative is already being manipulated and directed by the shadowstate: alien technology to sustain the cancer that is the old way of creating; aliens to save humanity from climate crisis (which is really the End Times convergence); transhumanism to enhance the 3D body, but at the cost of losing sovereignty. On the surface it looks glitzy and glamorous. But lift the hood on this bright new Tesla, and the morality is just as decrepit as the old gas guzzler.

It’s all avoidance. That’s exactly what this Opposing Consciousness is all about – avoiding the stark staring obvious: that we are all interconnected with the Universe, and there is no ultimate avoiding its cycles of death and rebirth. Why would you want to? Each reality construct contains within it distortion – always a higher harmony is possible. Each karmic crystallisation contains the lessons through which to evolve, and when the work is done, a new harmony manifests, but with even greater alignment, greater resonance, greater respect, interconnectivity and love. It’s only the wayward and foolish that seek to avoid this. The natural cycles of death and rebirth continually liberate you to actualise ever more of what you can become. It is only Homo Sapiens, programmed by his Opposing Consciousness concubines that is in fear and avoidance of this universal truth.

Explore the Origins of Opposing Consciousness Intervention on Earth

There are many evolved species out there who are working to come close at these times and work with humanity’s evolutionary process. For example:

– The Andromedans: who shape reality by observing and actualising the flows of sacred geometry and numerology around which realities crystalises.
– The Arcturians: quirky, humorous and highly erudite beings, who are encouraging  alignment with natural technologies, the planetary stargates for example, that will be instrumental in Earth’s great realigning process.
– The Pleiadians: with the love and empathy to be able to feel other sentient beings as themselves. They flow like the dolphin, creating with joy, inquisitiveness and vibrancy. They’re completely transparent with integrity.

Why are they not readily visible to humanity? To some extent they are, but not necessarily with 3D eyes. Crucially they are respecting the Universal Law of Free Will – the inalienable right of each soul to self determine as it emerges from the source. And so it’s not about overriding your reality; not taking away your sovereignty by blinding you with science or even love. There’s encouragement to realise truth for yourself, to experience the love of self. And it’s challenging right now, because the Intervention is hell bent on blocking humanity’s connection beyond the 3D/4D layer, in which there are many dissonant  and distracting frequencies.

– The Annunaki: who were the original architects of the “matrix” in which we live. From the Sirius constellation they suffered the tremendous breakdown of their population there and sought then to reconstitute it. They are masters of energy technology and are very strong at creation on the intellectual plane.

– The Reptilians: who’ve been around on the earth since primordial times. They are fiercely reslient and warrior like, able to thrive as a pack in the harshest of environments. Their modus has been to infuse the human mind and control it with fear. But now plenty are realigning and supporting humanity emerge from physical control into weaving 3D reality from the quantum field.

So the situation is complex and confusing in the 3D/4D layer. But when you witness the synchronisitc effects of the quantum field you realise there’s a spectacular “pulling through” going on. That the karmic construct of the shadowstate is destabilising. This is caused by the convergence of the grand cosmic cycles, but also by the Benevolents (Annuaki, Andromedans and Arcturians) busily removing the blocking technologies in the 4D layer. The planetary Stargates are opening, witnessed in the recent triggering of the Volcanoes, so there’s now a releasing flow of the pent up energies of the lock down.

An Understanding of the Opening of the Planetary Stargates 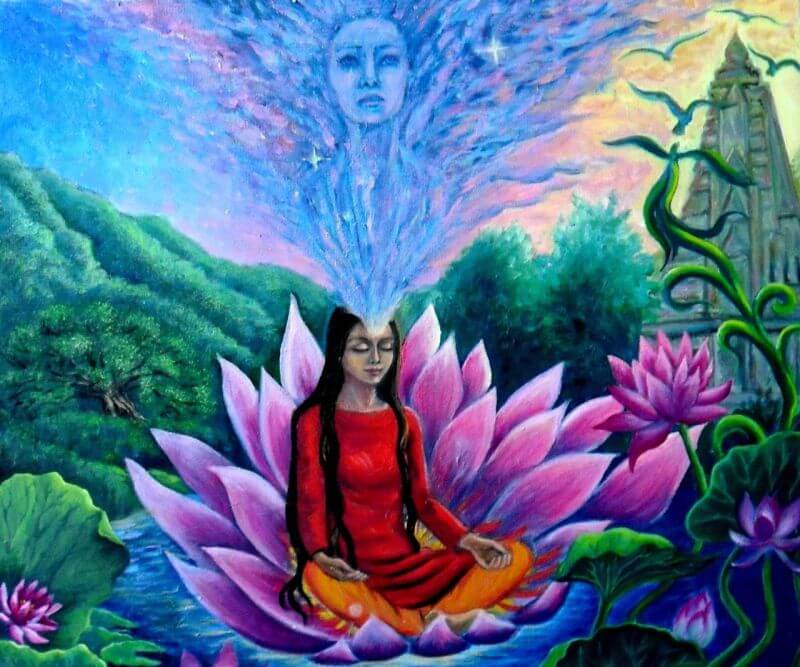 The result is that the surrounding energy field is progressively transforming. You’re witnessing a widespread activation of human consciousness which is challenging the narrative of the shadowstate. Sovereignty and self determination are being reclaimed by a growing number. Thus the revelation of the shadow has been necessary in this spiritual metamorphosis – you cannot go to the gym and build spiritual muscles without the weights!

Despite the confusion and deception, plenty of people are rediscovering their multidimensionality by going deeply inwards, letting go of the external drama and beginning to shape new realities from higher consciousness – interconnected with the free energy of the Universal Torus. This is the way for humanity to go now, those who can hear and respond to the galactic 11:11 homing beacon.

We are far from out of the woods yet, but the benevolent light is shining through and speaking ever louder to those with the ears to hear: let go of the old karmic construct, release its claws from your being, unravel its tentacles from your mind and let the heart guide the show. Through signs and synchronicity, sacred geometry and numerology, through the loving embrace of mother nature, you will be guided home and rebirthed into the Galactic Family of Light. That’s the great possibility and invitation that now exists for all.

Personally I am positively revelling in that bright possibility!

If you would like support in realising yourself as a part of the Galactic Family of Light, explore the work of the…
Openhand Ascension Academy.

Originally published at www.openhandweb.org and reproduced here with permission. Openhand is a unique approach to spiritual evolution: integrating enlightened wisdom of spiritual masters through the ages, it is a way of tapping into the Benevolent Guiding Consciousness of the Universe and aligning with it in your life. It helps you unveil your True Self, remove karmic blockages and unfold your Divine Destiny. It leads to authentic, resilient and truly successful living.

Did you find this article helpful?

If so, please consider a donation to help the evolution of Wake Up World and show your support for alternative media.

Your generosity is greatly appreciated.

Views: 478
E-mail me when people leave their comments –
Follow

ONE OF THE BIGGEST FOOL ON PLANET EARTH ...Female Trophy Hunter Explains Why She Will Never Regret Killing Wild Animals

"It Was All Planned Out!" Max Igan, David Icke & Glenn Beck Expose The World's Most Dangerous Lies! A Video Journey You'll Never Forget!