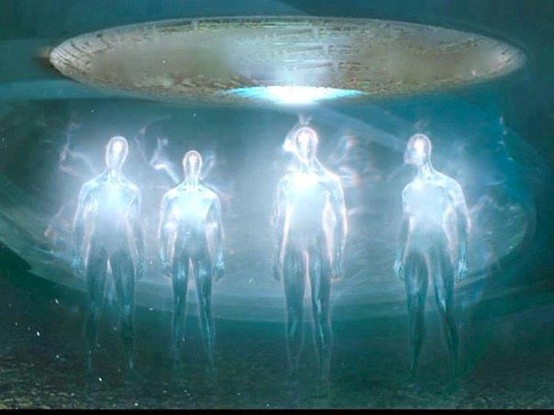 Loved ones,
further events to lay down the cosmic light bell will
be on display and will take place around the world.

For a short period of time the“emergency” test case will
be rehearsed, so that people can attune to the new levels
and so that the new holograms can be established forever
on this earth and completely displace and eliminate the
old energies.
New life awaits you then and if you want to attune to this
great spectacle on the day prior to the ascension of your world,
observe the sky and watch the people how they change, as they
are embedded into this new energy of the light – even if only for a
few minutes, as long as the test run phases are in progress until the
final ascension. Please stay vigilant and pay the necessary reverence
to this time for its uniqueness.
Let you never be fooled by the ubiquitous deep rifts that emerge
every day on this level of your perception and thus being drawn
into a new drama; dramas that keep you on one of the 4D earths.
Also know as follows: The perfidious attacks of the dark powers
go on – but can no longer reach you! This means that all attacks
must halt in front of the ascending humans because they cannot
reach their energetic structures any more.
Thus, very often the light warriors of the first and last hour
have a sense of being under a “siege”. And so it is.
The dark powers, who can no longer penetrate in you,
because your aura layers and your energy system are completely
sealed, are flocking around you and watch and disturb you as
well as they are still capable of. Like a medieval siege of a castle,
so are the light warriors now besieged on the verge of their
ascension by the dark forces from a safe distance – and they
know that they can do nothing any more, can prevent nothing,
because they have no more power over you.
This has been announced to you today, so that you stay
vigilant and never careless and open up again to these
low energies – because this makes it possible for those,
who are no longer authorized, to enter your fields.
The sealed aura layers keep everything away as long as
you stay focused in your decision and in your focus on the light.
A moment of inadvertence is, however, enough and already you
can be revisited again by those forces that would, under normal
circumstances, belong to the Siege-Gang.
This means that, although you are out of reach for the dark,
it is mandatory that you daily reaffirm this decision through
your discernment and vigilance and to live to it.
The next few days and weeks will be extremely exciting.
The New Earth descends and lifts you out of this timeline,
so that you can accommodate in the ease and the light of
the 5D to your new home.
And in the meantime, the events on this level of perception
will manifest in a more contradictory manner than ever before.
While new earth masses will rise from the oceans, while storms,
land shifts and discharges of most diverse nature will occur,
while new star will show up in the sky and while the light fleets
are kept ready, the dark ones will unleash more and more
crimes against you.
And the game will go on and will stay upright for all those
people, who have not given up their role in this game.
All this determines the quality of time of the last days before
the final unveiling of the old world and the heaving of the light
warriors to the new levels of Being. Pay attention to everything
that comes now! The sky is full of wonders and Mother Earth
gives birth to a new life – the earth of the fifth dimensional
level of Being.
I am with you
ASANA MAHATARI

Originally published on: http://www.stankovuniversallaw.com/
(Hyperlink inactive because the light world publishing refrains from any
direct links. Please copy and activate the link in order to access this page.)
The light world publishing and the author do not lead any correspondence
whatsoever on the texts / messages published on this website.
Views: 136
Tags: 5th, asana, dimension, mahatari
E-mail me when people leave their comments –
Follow

THE DIVINE LIGHT IS RETURNING TO EARTH, AND WE WILL EXPERIENCE A MASSIVE VIBRATIONAL SHIFT AS WE PREPARE FOR THE NEW EARTH.  Gaia's Ascension UpdateAs I have stated before, the energies on Gaia are changing. Many things are happening as a result of…
See More

Top-level negotiations between Asian and Western elders to start a new golden age for humanity are proceeding well, according to sources involved. The basic agreement calls for the complete write-off of all debts, public and private, a one-time…
See More

"Sometimes i feel were the Water is. The Air feels from that direction always a little bit cold."

"Thanks Sohini.....and water is a very interesting substance from which we may extract aetheric energy, in accord with the researches of Viktor Schauberger....
I have several aetheric energy producing devices, which utilize imploded water...
There is…"