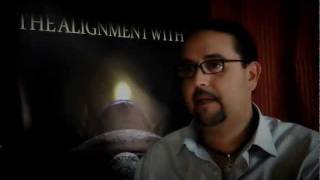 Dr. Jose Jaramillo  will be a guest on The Cosmic Eye Ashtar Command Radio Show Sunday 9/9/2012 at 11:30 AM Est-He has been the host of a radio show in San Diego, California called "Ancient Mexico" for the last four years. He give lectures and workshop on the Mayan calendar and he takes tours to the ancient sites of south Mexico and Guatemala with the only purpose of promoting the ancient culture of Mexico. He began his spiritual life at the age of 13. Jose was awakened and aware of the harmonic convergence prophecy that end in 1987. He began his studies on the Mayan Calendar in 1998 when he moved from Guadalajara Mexico where he was born to San Diego where he now lives with his wife and daughter. He is also the author of two books title "Greatest Desires" and "13:20" He is the creator, writer, producer and director of the documentary "BETWEEN 2 WORLDS".

Currently he is working on his next film Between 2 Worlds "The Alignment Within" and in he is writing his third book in association with Dr. William Gaspar, "The World Tree".

In this book they were trying to tide all the connection between mythology, cultures and religion in regarding when was the last shift of the ages, and when humanity will expect the next shift of the ages, which according to the Mayan calendar will be at the end of the year 2012.

What is the cosmic knowledge behind all the different stories throughout the world, like the two mythological brothers SETH and OSIRIS, CAIN and Abel, QUETZALCOATL and TEZCATLIPOCA, GILGAMESH and ENKIDU, HUNOR and MAGOR, ENLIL and ENKI, HUNAHPU and XBALANQUE. What is the secret behind the Venus Calendar, which is clearly in the Bible, with two wives of JACOB and the two Mary’s in the life of JESUS? What is the connection with the fellowship of the Magical Tree, when different animals are portray in different tales, like the Bull and donkey at the nativity when JESUS was born? What is the real message behind this astronomical alignment, that will cause the next shift of the ages and the next ice age.

Tune in to the Cosmic Eye Ashtar Command Radio show and findout as we interview Dr. Jose Jaramillo live Internet Stream at www.wesufm.org/

"Listen to this X22 report by Dave and as usual I recommend ignoring the text and focusing on his spoken words, only...To get around YT censorship, he posts his reports using several channels and this is one such channel...

EARTH WILL BE A PARADISE-LIKE PLACE. THE TRANSITION FROM CARBON-BASED TO CRYSTALLINE-BASED DNA HAS BEEN DESCRIBED AS A QUANTUM LEAP IN HUMAN EVOLUTION. HUMANITY WILL BECOME IMMORTAL.  Humanity Will Become ImmortalGreetings, friends! There's some…
See More
More…
Loading ...