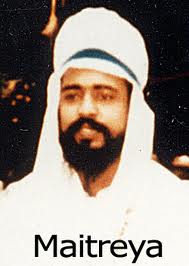 Between 1977 and 1982, Maitreya telepathically communicated fragments of his teachings to Benjamin Creme at Creme's regular public meetings in London. A recurrent theme was the need to end the suffering of millions of people who go hungry or starve in our world, which actually has a surplus of food. This imbalance is one of the primary reasons why Maitreya returns at this time.

"How," Maitreya asks, "can you be content with the modes within which you now live: when millions starve and die in squalor; when the rich parade their wealth before the poor; when each man is his neighbor's enemy; when no man trusts his brother? For how long must you live thus, my friends? For how long can you support this degradation?"

Since that message was given in 1979, we have been shocked by the horror of recurring famine in Africa and the ongoing misery in other nations. Gradually we have come to recognize that world hunger is unnecessary as well as immoral since it is due not to a lack of food or food production capabilities, but to the social, political and economic injustices that produce poverty. It is the poor who go hungry, whether in a 'developed' or 'developing' nation, and both domestic and international institutions maintain and exacerbate that poverty. Thus the gap between rich and poor grows ever wider; it now represents the single greatest threat to world peace.

Among the attitudes that keep these institutions in place is complacency. Maitreya calls complacency the root of all evil in the world. It leads both individuals and institutions to become estranged from the realities of life, and it prevents us from finding effective solutions to our problems. Complacency is ultimately self- destructive, and whole societies can be destroyed by it.

Maitreya makes clear that we can, if we choose, change our ways and put an end to hunger and to the monumental array of man-made crises we now face: "The problems of mankind are real but solvable. The solution lies within your grasp. Take your brother's need as the measure for your action and solve the problems of the world. There is no other course." When we begin to follow this advice and institute the principle of sharing, peoples and nations will begin to trust one another; once there is trust, there will be justice; and once there is justice for all, we will have a genuine and lasting peace.

A new energy pervades the planet now. This Energy of Equilibrium flushes out negative forces and then creates a state of alertness in individuals. Under the influence of this energy more and more people will revolt. People will not accept imposed solutions.

Suppression or repression will collide against a growing awareness among the people. Where the people's voice is not heard, there will be revolutions. This is not prediction, but recognition of an inevitable effect. The same Law of Cause and Effect that applies to nature applies to human beings.

The new politics will no longer be molded by the 'isms' of capitalism or socialism, but created from self-respect in individuals and nations. Liberty, freedom and salvation will be the objectives of everyone.

The fact that 'all men are brothers' will be increasingly translated into structures and practical programs that reflect this reality. Nations can and will experience brotherhood, common goals and common aspirations.

On market forces and commercialization

The 'engines of war' have been switched off. The cold war is over. But that energy cannot just disappear; it has to go somewhere. It has found a new womb: the commercialization created by market forces. This represents a serious new threat to the world. Market forces are the forces of wickedness, confusion and chaos, and its children are competition and comparison. They have created social and natural havoc. People have been condemned to death, literally, in the name of profit and loss.

Commercialization has affected all nations and will result in a final collapse of the world's stock markets. After this crash, the first duty of governments will be to feed people with the right food. Their second duty will be to ensure adequate housing. Next will come health and education.

In the new systems, social consciousness will guide market forces, not the other way around.

On crime, violence and drugs

Society as a whole is attempting to emerge from its bondage, and the eruption of crime, corruption, drugs and violence are the inevitable prelude. Crime and violence, like any problems, require a proper analysis of their causes.

Strong policing will be needed to crack down on the organized gangs of drug producers, but it is not the answer to the individual drug user. Drug addicts are suffering from spiritual starvation, from extreme self-alienation. Life becomes purposeless and people want to bring their lives to an end, and so they commit slow suicide by way of drugs.

If life has no meaning, then meaning is what must be restored. For this to occur, it is necessary for the person to experience a sense of his own worth. There is no substitute for dealing with the individual's internal world.

At the moment, prison is the only alternative for violent and dangerous criminals. But the problem of crime cannot be cured by sentencing people to prison. Eventually, certain judicial reforms will take place, and minor or petty crimes will not lead to prison sentences.

When world tension begins to decrease, when the principle of sharing begins to be implemented through a variety of social, economic and political reforms, people will feel less threatened and there will be less and less crime.

The environment will become the number one issue throughout the world. This growth in concern is the result of increasing Self-awareness. There is a link between the inner and the outer environment: the moment you become aware of yourself this awareness then leads you to look into the outer environment.

There are also connections between the negative forces generated by humanity and what happens in nature. These connections will be increasingly seen and understood as such. Many natural disasters are responses to human activities.

The use of nuclear energy also generates repercussions under the Law of Cause and Effect. There is a difference between using energy within its natural evolutionary base, and manipulating energy. The latter leads invariably to trouble because natural equilibrium is disturbed. A windmill uses the power of the wind to generate energy. A 'controlled' underground nuclear explosion manipulates energy, disturbing the earth's balance. This can and does result in earthquakes.

Human beings are linked to one another and, in principle, a thought can be picked up by anyone, anywhere, in a moment. Nuclear weapons are interlinked via both energy and thought formation. The energy behind all acts of nature and all mental acts is one.

We will see a new equilibrium in the world; both people and nature will respond constructively. People will be able to live in closer contact with nature and there will be greater harmony. There will be no need for nuclear energy: the power of the sun will be used. Because of the greater harmony between nature and humanity, people will be happier, for to disturb the environment is to disturb our own nature.

On the art of Self-realization

Maitreya says: "I have not come to found a new religion. I have come to teach the art of Self-realization, which is neither an ideology nor a religion, but benefits people of all religions and those who have none. I seek to express that which I am through you; for this I come."

The Self alone matters. You are that Self, an immortal being. Suffering is caused by identification with anything and everything which is not the Self. Ask yourself, 'Who am I?' You will see that you are identified either with matter (the body), or with thought (the mind) or with power (spirit). But you are none of these. Mind, spirit and body are the temples of the Lord. The Self experiences in these temples the supreme Being and Becoming of the Lord.

One of the easiest ways to know me, Maitreya says, is to be honest in your mind, be sincere in your spirit, and practice detachment. Any action performed with dishonesty of mind, an insincere spirit and attachment is destructive. For example, when you think one thing, say another, and do something which is different again, you are lost. Honesty of mind leads to honest speech and honest action. This harmony leads to peace and happiness. Without detachment there is no salvation.

Be what you are. Do not surrender your self-respect, your dignity, to others. Do not allow anyone to cast his shadow over you. A Master gives experiences, but does not cast his shadow.

Maitreya says: Without disturbing anyone, I will choose my moment.

Even when you see me, do not run after me. If you run after me, you will lose me. If you parade me, you do not know who I am. I cannot be monopolized -- I belong to everyone.

I have not come to create followers. Each of you should continue to develop within your own religious tradition. Respect your own religions, your own ideologies -- in brief, your own thought-form, and you will experience the Master.

If you take one step towards me, I will take two steps towards you. I will lend you my strength. I am always with you.