Ria was my very first Chihuahua and was given to me as a gift when only six weeks old. I got her a mate and named him “Bongo”. Together they produced six litters of beautiful, healthy puppies. Ria was a very happy girl, a loyal and protective companion and a real good mother who loved and took great care of all her babies. In midlife Ria began to experience digestive and intestinal discomfort was diagnosed as having an injury to her liver. As I was always careful to feed her only “Wysong” dry dog food and human grade unprocessed meats and to use only nontoxic, pet friendly house cleaners, I believe she was poisoned by eating grass that had been sprayed with some chemical. She did eat a lot of grass while we were out walking. To end her suffering from physical symptoms, she was euthanized in June 2010.

I lived at the house where this picture was taken for over nine years and, during my entire stay there, I always fed meat, fat and fish leftover from my and my dogs’ meals to the neighborhood crows. I cut the food into small chunks and served it on a plate just as the one in the picture. Frequently dozens of crows would gather in my securely fenced front yard for a feast. This picture was taken a few days before I moved out on June 26th 2009. It shows a pattern of twigs that one or more of the crows placed on the plate and on the ground, after removing the food that was on the plate. My intuition tells me that through this arrangement of twigs the crows were giving me a message. Perhaps they knew I would be moving in a few days and wanted to say “goodbye”. After taking a few pictures, I left the gift undisturbed and went into the house. When I looked out in the front yard an hour or so later, the twigs were gone. A crow must have removed them as the yard was very securely fenced (not even a Chihuahua puppy could get out). 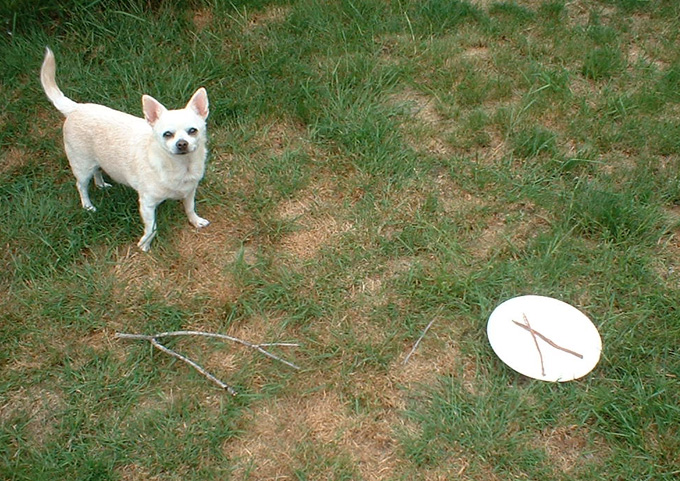