I personally took this AMAZING photo in August 2009 - the last bank holiday in the UK when we took they children to London. We took the Big Bus Company tour around the city and clicked this image while on the upper deck. All I have done to this photo is darken the contrast so you can see the images in the clouds. It was taken on an inexpensive digital camera.

I have found an interesting reference to this statue -

Temple Bar is the barrier (real or imaginary) marking the westernmost extent of the City of London on the road to Westminster, where Fleet Street (extending westwards) becomes the Strand. Until 1878, this boundary was demarcated by a stone gateway designed by Christopher Wren.

Charles Bell Birch's statue of a heraldic dragon tops the present-day Temple Bar marker in front of the Royal Courts of Justice.

In the Middle Ages, the authority of the City of London Corporation reached beyond the city's ancient walls in several places (the Liberties of London); to regulate trade into the city, barriers were erected on the major roads wherever the true boundary was a substantial distance from the old gatehouse. Temple Bar was the most famous of these, since traffic between London (England's prime commercial centre) and Westminster (the political centre) passed through it. Its name comes from the Temple Church (an old complex once owned by the Knights Templar but now home to two of the legal profession's Inns of Court), which are located nearby.

It has long been the custom that the monarch stop at Temple Bar before entering the City of London, so that the Lord Mayor may offer him or her the City's pearl-encrusted Sword of State as a token of loyalty. This picturesque ceremony has often featured in art and literature. However, the popular view that the monarch requires the Lord Mayor's permission to enter the City is correct. The city does not belong to the Queen or the Monarchy and as a result the Queen has to seek permission before entering the City of London.

Today Temple Bar (like other major entrances to the City of London) is marked by a stone monument in the middle of the roadway, topped by a statue of a dragon. 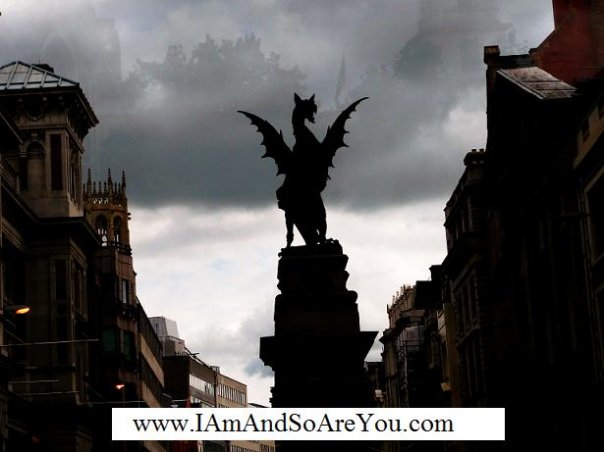