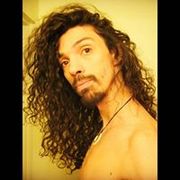 I am Shawn Dall, my higher self is Crai'riain, also known as Crethis Starflower Liun, or King liun - more can be learned from him here: http://spiritscienceactivenation.net/Oz/phpBB3/viewtopic.php?f=51&t=461&p=6031#p6031 I am a source speaker, in which I output sources wisdom as part of a collective hive mind of source speakers - I am here to awaken people to their higher selves, and empower them to find the answers within, and ultimately recruit more source speakers to give source a voice - you can find sources operations on facebook: https://www.facebook.com/TheAlmightySource|| ----- I am a bit of a unique case. My higher self is half paa-tal and half draconian - he is 954 billion years old, and was created by royalty on both sides in an attempt to bridge the enmity between the two opposing factions. It didn't work very well - with both sides sort of resenting the outcome, which resulted in many issues, - crai'riain however took the strengths of both genetics and used it to form his okingdom - ahn riot ten - the shining hope of unity - a place of enlightenment he uses to recruit and teach from. More on that here: http://spiritscienceactivenation.net/Oz/phpBB3/viewtopic.php?f=51&t=468&sid=3e431d65a6a3a1aedd00b07b4c40c69a my avatar is crai'riain - that is how he looks - elven looking, long green hair - golden crown that represents the sun and the moon, and large angelic wings. Airy, carefree, happy.

Started by Crai'riain in Present Yourself To Others

"yes I am aware of the urversa texts - thanks for the clarification! This info coincides a lot with the keylontic sciences info I was raised on spiritually, so I have been trying for a while to tie the two sources of info together - this certainly…"

For those that do not know. I am an incarnational representative of my higher self. a Paa-tal/old draconian hybrid called Crai'riain, or Crethis Starflower Liun, a being who is almost a trillion years old. (Continued from Part 1) Eventually,…
See More

"king crai'riain here, aka King Liun, a paa-tal hybrid king of his own kingdom, nice to meet other paa-tal royalty :)"

"nice to find more paa-tal info dear- thanks for sharing - this helped fill in some memory gaps, like the location of the paa-tal homeworld :)

now how does it connect to andromeda? Were the paa-tal stationed there as well?