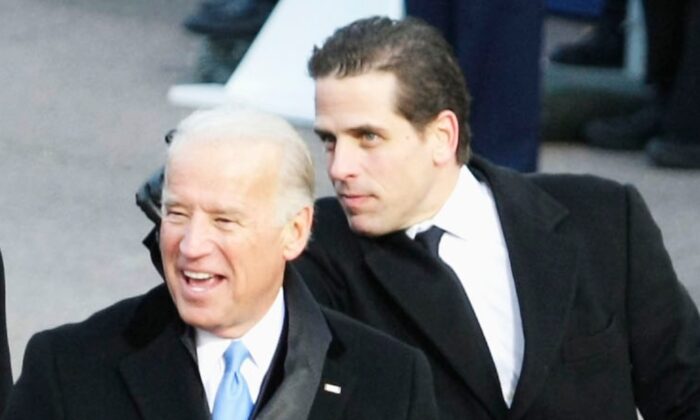 Then-Vice President Joe Biden and his son Hunter Biden at the reviewing stand to watch President Barrack Obama's Inaugural Parade from in front of the White House in Washington on Jan. 20, 2009. (Alex Wong/Getty Images)
POLITICS

Johnson, in a letter to Wray over the weekend, said a whistleblower contacted his committee on Sept. 24 about the laptop that was left at his business, saying he turned it over to the FBI. Johnson said that staff immediately asked if the agency can either confirm or deny details to validate the claim, but he said that the FBI wouldn’t confirm or deny the information that was found on the device.

“I have a responsibility to validate and verify the contents of any information produced to my committee,” Johnson said in his letter. “The committee must know if it receives information that could be fraudulent or not accurate.”

He mentioned that the information could be related to a foreign election interference campaign, saying that if that is the case, a defensive briefing is necessary. Johnson added that if the whistleblower provided false information, it could be a crime.

Johnson appeared to be referring to the laptop that was purportedly taken to a computer repair shop before its contents were turned over to the NY Post, which published emails and photos pertaining to Hunter Biden. A copy of the hard drive was first sent to former New York City Mayor Rudy Giuliani, who told The Epoch Times that the device contains about 800 of Biden’s photos, alleging that some of them contain illegal acts.

“For these reasons, the committee must know whether the FBI has assessed the validity of materials the whistleblower has provided, and what, if any, actions the FBI has taken since obtaining this information,” Johnson said in the letter.

He also included a series of questions that the FBI should answer about the laptop, including whether the agency has material from the device, how they acquired it if they did indeed obtain the laptop, if the records on the hard drive have been altered or are genuine, whether the records were authored by Hunter Biden, or if the laptop was hacked in some way. 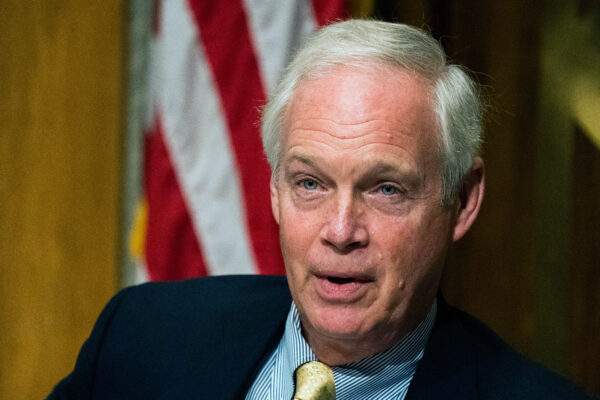 Biden’s campaign and Biden have disputed some of the allegations, with Biden saying that it is a “smear campaign” in remarks delivered over the weekend.

Emails on the laptop purportedly showed that Hunter Biden had organized for Joe Biden, then the vice president, to meet a top executive at Ukrainian energy company Burisma Holdings, where Hunter had served on the board for a reportedly lucrative salary per month. “Dear Hunter, thank you for inviting me to DC and giving an opportunity to meet your father and spent [sic] some time together. It’s realty [sic] an honor and pleasure,” read the alleged email from Vadym Pozharskyi, an adviser to the board of Burisma, on April 17, 2015.

Biden campaign spokesman Andrew Bates said that Biden had “carried out official U.S. policy toward Ukraine and engaged in no wrongdoing,” and that some “Trump administration officials have attested to these facts under oath.”

Meanwhile, some media outlets and Democratic lawmakers are saying the Hunter Biden reports are part of a disinformation campaign, alleging that Russia is behind it. House Intelligence Chairman Adam Schiff (D-Calif.), who has long championed the claim that Russia colluded with President Donald Trump’s campaign in 2016, again asserted Saturday that “we know that this whole smear on Joe Biden comes from the Kremlin,” without elaborating.

For his part, Trump wrote that “Hunter Biden’s laptop is a disaster” for Biden’s campaign and his family.

“It is now a proven fact, and cannot be denied, that all of that info is the REAL DEAL. That makes it impossible for ‘50%, or 10%’ Joe, to ever assume the office of the President,” he wrote in the morning. "Truth be told, I had to listen to it several times! It fills me with joy and hope!"

"Because the church wants you to suffer!"

"This is very interesting! The folks from Farsight, the remote viewing site, looked into the whole crucifixion, and came up with the same conclusion! That someone else was crucified in his stead."

"Christians like to play victim game when it comes to persecution for one's faith. But it is actually nothing of the sort. In many cases Christians were actually never killed for their faith. Rather, they were killed for mendling with Roman politics.…"
More…
Loading ...