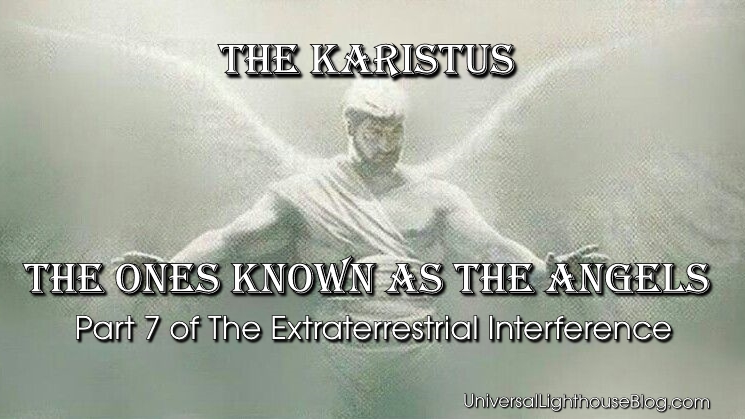 The Karistus, The Ones known as the ANGELS - Part 7 of The Extraterrestrial Interference.

Today I am being guided to Disclose more information about the Beings the Karistus, who We all know as the Angels.

Throughout human history, we have been being Guided and Manipulated behind the veil by the unseen. We have grown to refer to these beings as The Angels and Demons, However, Not all is as it seems, even on the other side of the veil.

Who are the Karistus and Why are they Here?

Just like every other Race in the Multiverse, There are Positive and Negative aligned Karistus.

In Ancient times within this Universe, long after Sophia had split her soul into the Form of the Earth, Many other beings from all over the Universe started to come here. The first bipedal beings who had begun to evolve here were still very primitive. One of the Universal Laws is to allow for evolution to peacefully occur without outside manipulation. Most of the extraterrestrial beings left us alone. However, the Story goes that several Anunnaki came to Earth to originally collect Gold to save their Planet. But, In doing so they ended up manipulating the Human DNA enhancing it to where the Humans became much more advanced in their development. Not all the Anunnaki wanted to enhance the Humans, And they were very against keeping Humanity around. So wars arose amongst the Gods. By this time other beings had started taking sides in the big dispute. The Choice had been made to keep us around, but to keep us Blind from knowing our Truth. This is when The Karistus, stepped into the Picture. They also had differences of opinions, and begin to war along with the Anunnaki. This is where we hear of "the Fallen Angels".

We have all heard the Story of the Fallen Angels in biblical texts. These beings were, and still are what are considered "Angels". Nothing has changed as far as their appearance. These beings when manipulating humanity can appear to us as Beautiful Angels because that is what they are.

Lushifar or The One known as Lucifer is very real and he is one of the most beautiful Angels. He hates Humanity with a passion and will stop at nothing to destroy us. He created the Dark Alliance between the Dark Angels, the Negative Anunnaki, the Vlash, the Tall Greys, and The Jinn, These are the ones who are referred to as the Demons. Their plan was, and still is, to either have total enslavement, or the Total destruction of Humanity.

Nevertheless, on the Positive Side, The Positive Annunaki, Kurs, and the Karistus Angels have been actively protecting and defending humanity from the dark's Evil plan.

Each and every one of us as Humans have what is referred to as a Guardian Angel. This is your own personal Angel that is assigned to you. These beings are here to assist us but also to protect us. Not all beings have this same assistance as we do as a species. Humans are very special in this grand design because of our enhancement. The Angels felt it necessary to stay involved with Humans for their Spiritual development out of the lower vibrations and into the Higher forms of Light. They have made it their Soul Purpose to be in Total Service to Humanity.

But while interacting with the Angels, how do we know the difference between the Positive and negative factions?

It is always good to remember that your Guardian Angels Do not ever impose themselves on you in any way. They will never approach you forcingly and demand anything from you. Their first rule is that you have Free Will. In most cases, you will never see or hear from your Guardian Angel unless you ask them to step up in that manner.

A Negative Angel will force itself on you, in all cases initiating interaction. If an Angel just pops up in front of you, This is your first Big Red flag. Angels of the Light do not initiate any interaction with Humans. Again Freewill is of most importance. You must make the first initial contact and interaction.

If you are connected to a Dark Angel, they will begin to rearrange your life, by causing you to make the Wrong Choices, for example leaving your Family, They often want to separate you from the closest people to you. You will notice Things will begin to go downhill instead of improving your Life. They will cause chaos, suffering, and Disease. They will attach the Lower Jinn to you so they can continuously Control you in all aspects. When saying yes to a Dark Angel you are allowing for the Manipulation in your life.

The only way to get rid of the beings out of your Life is through the Light, You must ask for it. Your Higher Self and your Guardian Angels will help in the removal of the Dark Ones, But you must be willing to let go of them. Most don't even know that they have connected with the Lower Beings. They Believe they are working with Angels of Light When they have actually been working with Angels of Darkness. Humans themselves must open their own eyes to see this deception. Most Christians know to fight Lucifer but they seem to forget that He had a band of other Angels with him that also fell into Darkness.

We learned from the Ancient Texts that The Archangels were split and that Archangell Michael became The Main Protector of Humanity, along with Archangels Gabriel, Raphael, and Uriel.

These beings do still exist, they are immortals, and do interact directly with Humanity. I am aware of 2 of them having incarnates on this Earth at this Time who are aware of their Higher selves existence. What this means is that, they are in human form, making Human Choices for this Planet, and knowing that they are the Archangels in their Higher Form.

As stated before within this Series, The Karistus and The other Extraterrestrials, incarnate on this Planet to work and manipulate directly with Humans. This makes it easier than trying to work through the veil. The Main incarnates that are here, are given Full memory of Past Lives and Most important, access to their Higher selves.

One thing I do wish to make clear, Each and every one of us has a Higher-self. That aspect of us, can be a Positive or a Negative Polarity. For example, the Dark beings on this Planet have a Dark Higherself, that resides within the Lower Dimensions. Lucifer, as a Angel would be in his highest form, but resides within the Lower 6th and 7th dimensions meaning he is evolving toward the Dark polarity. The more evil he becomes the more powerful he becomes.

The evolution of this Universe allows for Both sides to exist. So within the 4th Dimension, we must make a choice for ourselves on what way to evolve. To evolve toward the Light, you must choose to raise your Vibrations into Love and become Service to Others. This is the path to the Higher Realms of Light. The Angels of Light are here to assist us. We just need to ask them.

In so much Love and Light,

Chellea, Mystic and Channel of the Aeon's Sophia, Christos and the Karistus, The New Earth of Light, Full Disclosure, Channeling, and Gnostic Guidance. @ UniversalLighthouseBlog.com

“Greetings. We are the Arcturian Council. We are pleased to connect with all of you.We are very much in favor of humanity choosing your own path. We do not feel that we have a better perspective than you do on what should come next for humankind.…
See More

2022 05 16 Connecting ConsciousnessSimon Parkes did a podcast with a bit of intel followed by a very interesting Q&A yesterday you may wish to take in. He mentions the question mark around the return of President Trump. As always, the White Hats…
See More
More…
Loading ...