photo credit: RACHELI BEN-KNAZ WAKSHLAK, RAMI PEDAHZUR, AND DAVID AVNIR. Silver nitrate kills bacteria and then makes them into zombies, killing other bacteria around them.

The reason for powdered silver's exceptional antimicrobial properties has been revealed, and it's probably inspiring film scripts right now. Bacteria that absorb the metal die, but then start killing their neighbors in a zombie-like massacre.

Silver is a very effective, albeit expensive, antiseptic—a fact put to use even before thegerm theory of disease explained what the silver was killing.

However, the extent of this effectiveness has remained a puzzle. Silver ions are known to damage both the external membrane and the internal components of bacteria. However, while many things can be damaging to bacteria, silver's potency puzzled professor David Avnir of the Hebrew University, Jerusalem.

In Nature Scientific Reports, Avnir reveals what happens when bacteria killed with silver nitrate are then mixed with live bacteria of the same species.

The effect on the bacterium Pseudomonas aeruginosa was dramatic. Previously healthy bacteria died en masse; when sufficient silver was applied, initially 99.999% of the bacteria were killed through this second-hand exposure. The authors argue that the result “strongly indicates that not only does silver persist within the dead cells, but that it is an available source for further biocidal activity on viable cells." Avnir and colleagues dubbed the process the “zombies effect.”

To confirm that the silver was responsible, Avnir used a control where a P. aeruginosasample was killed by heat instead. While high temperatures proved equally lethal to the original sample, it did not turn them into zombies. The heat-killed bacteria had no effect on other members of its own species, demonstrating that it is the silver that turns the bacteria into zombies.

Avnir explains the process as the bacteria soaking up the silver, and then releasing it after death when living bacteria act as even more attractive sponges. 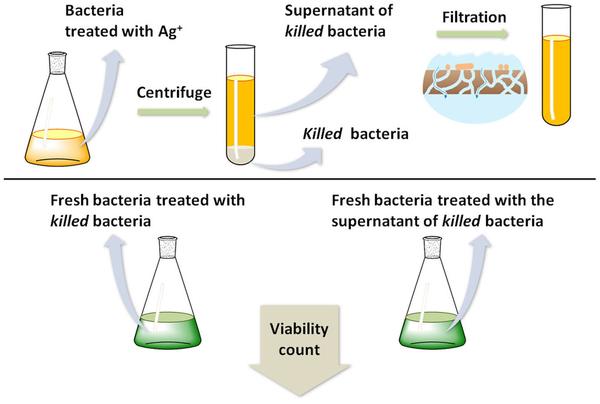 Credit: Ben-Knaz Washlak et al. via Scientific Reports. The leftover water used to kill the original sample was tested along with the zombies.

One of silver's advantages as an antiseptic lies in its persistence, continuing to kill bacteria for a substantial period of time. This feature is put to use with the infusion of silver into medical products such as bandages. “It follows,” the authors argue, “that prolonged action of silver ion releasing formulations benefit, at least in part, from the phenomenon we describe here.”

Avnir's work may lead to new ways to apply silver's antiseptic properties more effectively, controlling the release for maximum potency. Whether thirty ions of silver are sufficient to make a bacterium destroy other members of its species remains unknown.

Steve Hutchinson commented on the group 'Divine Upliftment For Spiritual Growth & Ascension'
"SolaraAnRa: So many of us are struggling to sleep well these days! This is a w wonderful aid to…"
55 minutes ago