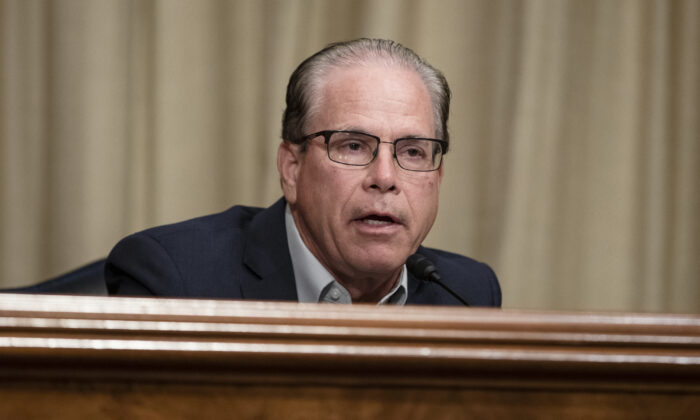 WASHINGTON, DC - JULY 21: Chairwoman Senator Mike Braun (R-IN) speaks during a Senate Special Committee of Aging hearing on “The COVID-19 Pandemic and Seniors: A Look at Racial Health Disparities” at the US Capitol on July 21, 2020 in Washington, DC. The committee is looking into the data that has been showing that communities of color have been disproportionately negatively affected by the spread of the coronavirus when compared to the caucasian population in the United States. (Photo by Samuel Corum/Getty Images) *** Local Caption *** Mike Braun
US NEWS

Sen. Mike Braun (R-Ind.) has thrown his support behind President Donald Trump’s threat to veto a defense bill amid the president’s efforts to curb liability protections for internet companies who he has accused of censorship and arbitrary policing of content.

Trump said in a Dec. 1 tweet that he would scuttle the $740 billion National Defense Authorization Act (NDAA) if it doesn’t include a termination of Section 230 of the Communications Decency Act, which shields social media companies from liability for most content posted on their platforms while still letting them moderate it.

Braun, in remarks to Just The News, said Trump is right in insisting the NDAA contains provisions that eliminate Section 230, saying, “If that’s not included, I think he’s justified in vetoing it.”

The president, many of whose recent tweets have been hit with warning labels amid his repeated claims of election rigging and voter fraud, has often expressed his opposition to Section 230, referring to it as “very dangerous and unfair,” and in a Dec. 3 tweet doubled down on his threat to veto the defense bill over the matter.

“Looks like certain Republican Senators are getting cold feet with respect to the termination of Big Tech’s Section 230, a National Security and Election Integrity MUST. For years, all talk, no action. Termination must be put in Defense Bill!!!” Trump wrote, presumably in reference to some pushback from GOP lawmakers.

“[Section] 230 has nothing to do with the military,” said Senate Armed Services Committee Chairman James Inhofe (R-Okla.), according to The Hill. “I agree with his sentiments, we ought to do away with 230—but you can’t do it in this bill.”

“I would hope that he would not actually follow through with that because the NDAA is critical,” Sen. Mike Rounds (R-S.D.) said in reference to the veto threat, The Hill reported.

Braun is not alone in voicing support for Trump’s proposal on the NDA, however. Sen. Josh Hawley (R-Mo.) said he would not support the NDAA if it does not include a repeal of Section 230, and Rep. Tulsi Gabbard (D-Hawaii) urged Trump, “please don’t back down. The freedom and future of our country is at stake.”

Senate Judiciary Chair Lindsey Graham (R-S.C.) also backed Trump on the initiative, with Politico citing the prominent Republican as saying, “If I were him, I’d use all the leverage I could.”

The Trump administration has been vocal about the need to change Section 230, arguing it is to force internet companies to manage and moderate content on their platforms responsibly and fairly. They have accused online platforms such as Facebook and Twitter of engaging in censorship of certain viewpoints. 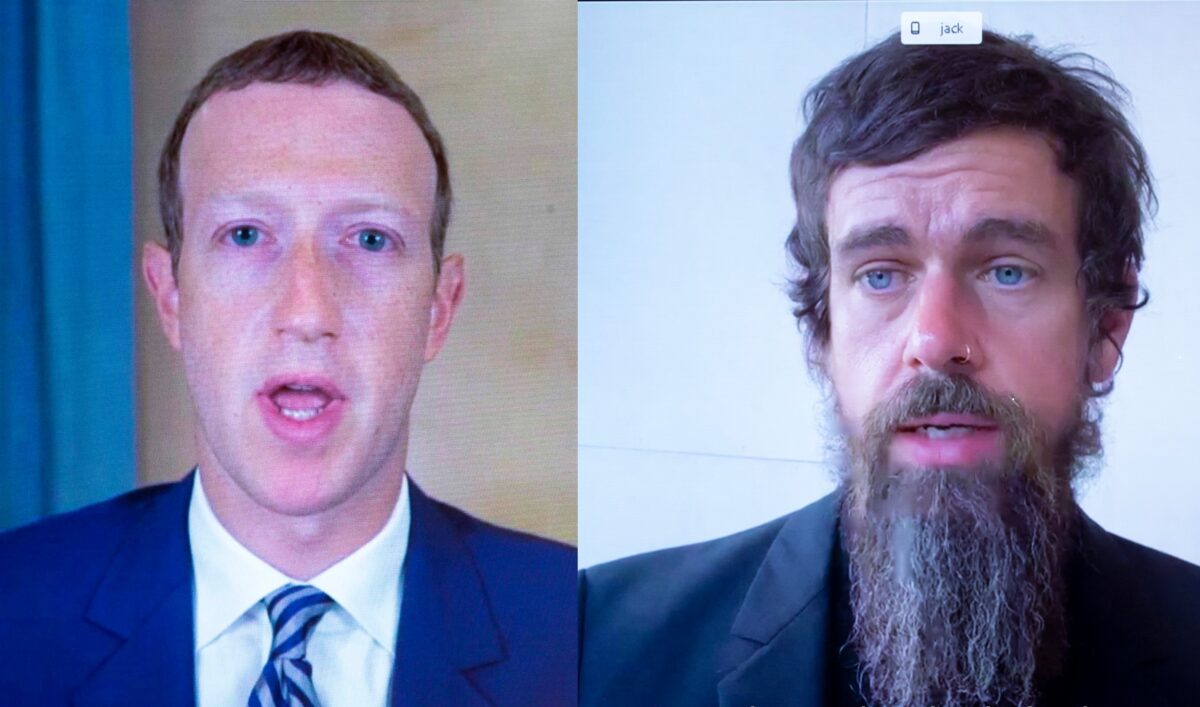 But there has been opposition to Section 230 from both sides of the partisan divide, with Democrats often arguing it allows tech companies to get away with not being stringent enough about policing objectionable content, like hate speech and harassment, while Republicans typically argue it lets tech firms moderate content arbitrarily, suppressing conservative voices and stifling free speech. Lawmakers from both sides of the aisle have signaled their intent to reform the law, but so far little has happened to change the status quo.

In what is perhaps one of the most significant bids to reform Section 230, the Justice Department (DOJ) in June released a detailed package of reform recommendations for changing Section 230 in a way that incentivized platforms to address illicit content while promoting open discourse and greater transparency.

Attorney General William Barr in a statement urged Congress to take up the matter, saying, “Taken together, these reforms will ensure that Section 230 immunity incentivizes online platforms to be responsible actors. These reforms are targeted at platforms to make certain they are appropriately addressing illegal and exploitive content while continuing to preserve a vibrant, open, and competitive internet.”

The question of Section 230 reform got a renewed push when the DOJ in October urged lawmakers to take up the matter after Twitter began suppressing a series of exposés by the New York Post about alleged business dealings of Hunter Biden, son of Democratic presidential candidate Joe Biden.

“The events of recent days have made reform even more urgent,” Assistant Attorney General Stephen E. Boyd wrote in a letter (pdf) obtained by media outlets. “Today’s large online platforms hold tremendous power over the information and views available to the American people. It is therefore critical that they be honest and transparent with users about how they use that power. And when they are not, it is critical that they can be held accountable.”

The tech industry has been resisting efforts to revamp or repeal Section 230, saying that the DOJ proposals could limit people’s ability to express themselves online.

Janita Kan and Jack Phillips contributed to this report.

Hello there, my Light friends. The title of the last channeling was ‘The wait is over!’ Clearly, it’s not, as there was no announcement made … and you were so sure. What happened?Dearest Blossom, and All of Light that come to this place to hear or…
See More

"My point is that if meditation was there long before Marxism, then there is another use of meditation other than as a Marxist tool to pacify masses. We don't need to do away with meditation altogether. We need to be careful with it. I think this…"

I believe we shared the following video a couple of years ago but it’s excellent and apropos for the current situation in America so more people will be interested at this point—and it’s coming from the military—which lends credibility.Americans…
See More

"Roaring Lovely
You'll have to watch the documentary there is evidence that will convince you.
I posted an article here last summer about Hitler with a great deal of evidence and it was immediately removed, so I can't repost it here again, but here…"

Kabbalistic Cross – bringing down divine light and beaming it in all 6 directions over the body part 1https://youtu.be/yxs1oRb7LQI part 2https://youtu.be/OF6trxDTX8I
See More

"Marxism / Communism and Capitalism / Liberalism / Democracy – which are all tools used by International Jewry for their domination of the planet. Many of the younger generation brainwashed in schools do not know that they are Marxists and…"

"Roaring Lovely – I said they use meditation not that they invented it. This was just a summary. Read the full article to have the whole idea. (I'm not the author)."
More…
Loading ...