Physical Ascension by its very nature implies the transmutation of the physical body into the Higher Realms, those serious about making such an ascension can attain much benefit by way of beginning to leave food behind. The ultimate aim is to be able to exist in the physical form, healthy, happy and well, with no requirement for food. The results of such a path, even if only partially attained include vibrant health, a strong energy, astral awareness in the physical vehicle, astral visions, oneness with Source/God and freedom from karmic density.

Those with little or no karma left to work through will find it easier to attempt such a path, then by way of the Grace of Source/The Higher Realms one takes a lot of sustenance directly from there with replaces the need to eat, either partially, or in some cases fully. The path requires a lot of care, an awareness and sensitivity to one’s physical body, a lot of physical body purification, as well as purification of emotional and spiritual karmas that create cords to karmic density.

The more karmic density one has, the more one will need to eat, and ultimately one can then succumb to the physical plane bodily sicknesses that plague much of humanity. Those with a lower karmic density in their body can exist on the energies of the astral, either in part, or in full, depending on one’s individual path. 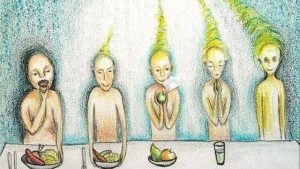 A lot of the dis-ease in the human body can be attributed to eating the wrong foods, too much food, build up of toxins, which clog the spiritual energy channels in one’s aura, which can then impede karmic purification or attract one into unfavourable karmic spheres of existence.

A mortal human being has to take sustenance from food as an energy source, it is an impure energy source which during the processes of metabolism, produces all manner of waste products and toxins which in time degrades the physical body, explaining in part why death is almost universal.

Without the pre-requisite karmic purifications, existing on little or no food, will be impossible. One can aspire to live from the light but if one has not transcended the light-dark duality aspect of reality, or one has cords to karma, or has matters and obligations to attend to in denser 3D realities it will not be possible in practice.

But for ascending beings who aim for ascension at the point of death, or ascension without death, the energies of the Higher Worlds (The Upper Astral), if properly assimilated and integrated into the physical vehicle can sustain one.

This is about increasing the higher-astral light awareness IN the physical body, that requires following the rules of the Higher Planes, of Source and managing awareness in the earthly, it is a life of extreme purification, not suited for many (such purifications do not affirm the ego and advanced Ascension Level karmic-purification is extreme, not many people can do it in this lifetime), but the rewards of the purifications are high if one can do it.

One will find one then never gets sick, is always healthy, can exist on very little or no food at all.

I found I was able to exist on 500-700 calories a day for almost one year without illness, sickness or any other troubles, even whilst living an active life, hiking and doing exercise, whilst being shunted with vast amounts of astral energy. In recent times the calorific requirement continues to decrease steadily and the body sustains to a greater degree from pranic (astral) energy.

Those that use Ayahuasca and other sacraments to experience the astral energies can have strong insights and visions, but to integrate the astral energy IN the body (necessary for Physical Ascension), it is necessary to forgo the use of such substances, afterwards the astral power is more grounded.

It is a myth that one can physically ascend on Ayahuasca or indeed with any other visionary substances, that is because it excludes astral energy integration IN the body, the main pre-requisite for any Physical Ascension. The advanced spiritual paths generally advocate renouncing the use of such visionary substances in favour of astral integration on Earth which then gives visions naturally that are far superior.

Most importantly, the astral power can be used to transmute the physical vehicle into a pre-ascension state, this process is greatly enhanced by transitioning away from eating food, reducing calorific intake in a sustainable manner whilst detoxifying and purifying the body with a proper awareness. Then, eating one small simple meal a day (instead of three) and a few sustaining liquids becomes much easier to accomplish. Those with years of being vegan or raw vegan, or predominantly raw vegan, will be advantaged on such a path as a lot of the physical detoxification (heavy metal clearing, bowel purification and other high level organ detoxifications) will have been done already. 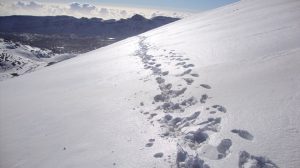 If one is working through karma simultaneously and with awareness also, one will be able to have strong conditions on Earth (grounding with nature) coupled with freedom from Matrix Consciousness and occupations that zap life-force, which impedes the Ascension Path. With the right conditions one can advance significantly.

Those who can transmute the sexual energy into the Higher Planes by way of brahmachariya (abstention from sexual activity) will also find it much easier to exist from Source Energy, eating less food is very useful for high altitude mountaineers carrying packs and for those wanting to tread the higher slopes of the spiritual mountains within.

The result of that semi-transition to pranic sustenance backed up by 20 years of spiritual purification and the integration of all of my experiences in the astral, shared in detail in my Life Work, was an extreme increase in astral awareness in the physical body, a lot of astral visions and awareness attained naturally without any kind of visionary sacraments (such as Ayahuasca), freedom from lower karmic density, the integration of many years of spiritual experiences, the cutting of cords to karmic density, strong conducive conditions in the Earthly Plane and an integration with Source Energy as well as freedom from ‘light-worker karma’.

All of that can be summed up as the Descent of Divine Grace into the Physical Body.

That showed up as an enhanced and lightened up physical body able to exist on very little food, when one receives forgiveness from Source for karma, by way of Source Love, the dispensations show up in integrated Divine Grace in the physical body, opening up the gateway for Pranic Living / Physical Ascension, for those who choose that path.

Those who sustain from natural foods, live in conducive conditions, manage their awareness and heal their physical bodies of heavy dependency on food for sustenance can start to ascend out of the life of eating food.

Ego Purification enables one to receive the sustenance of the Higher Love (aka Source/God’s Love).

Physical Body detoxification done properly, with awareness, enables the physical vehicle to thrive on extremely low levels of calorie/food intake indefinitely, as one eats less, one gets healthier, and ultimately one never gets sick.

Deepening one’s own spiritual journey and working with Source ultimately enables one to live without food at all.

Many conventional foods are laden with heavy duty toxins and pesticides incompatible with human health and life, as one ascends, more and more foods will begin to be seen as toxic and impeding to the path.

The level of karmic purity one has will determine how far one can take the process, as karma is transmuted, more pranic energy can be assimilated into the body by way of following the Higher Rules of Awareness. Those who have a higher level of integrated astral energy in their bodies can experience contact with loving Higher-Dimensional Beings serving as teachers for those working to transcend the karma of biosphere collapse.

The price to pay for the integration of Divine Grace to Ascension Level Physical Transmutation is extreme, decades of inner work, extreme emotional, karmic and spiritual purification, as well as the surrender of the ego, to the Love of Source/God – in order for the astral energy to descend into the body showing itself as a deeper oneness with Source Love.  The integration of that love, by way of karmic dispensation and Source Forgiveness -transmutes the cords to karmic density facilitating the start of the transitions to existing from astral energy instead of earthly food sustenance.