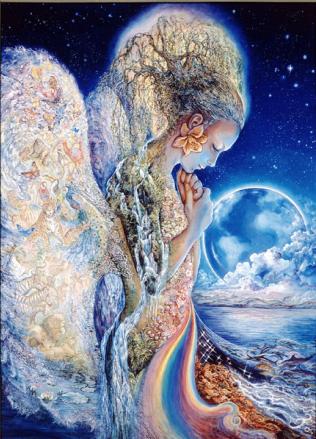 A New Awakening/ Upliftment.  This painting is a metaphor for Mother Earth birthing a beautiful new world, in a new dimension.

We of the star systems & planets of the Andromeda Council are your  family  &  friends.    We  are  here  to  let  you  know  your planet Earth/Terra and all of your people are about to go through major changes, a major stage of growth,  a  shift-up  in  vibration, called “upliftment”.   It is a completely new vibration, new higher consciousness & awareness, a new existence… for  the first time in your planet’s history.

The totality of this experience for you will be a cleansing, a rebirth, a transformation.  It will include a transition.  Most important, for the people of planet Earth - it will be a new beginning.  Most important to understand, it is simply a natural evolutionary step.

Though  the  process  has  already  begun, somewhat.   Earth  is about to transform in the near future from its current organic, 3D solid  matter form existence in the 3rd dimension… into the higher levels of a 4D crystalline fine essence matter of the fourth dimension/density reality, the vibratory rate one frequency faster than currently on Earth... as Earth's solar system is crosses the galactic equatorial plane zone of the Milky Way galaxy.

Overall, this new area of 4D, fourth dimensional, and higher, space is a place where matter has far less density & weight, an area of much faster & higher frequency energy vibration.  It is also a dimension where time will no longer have a hold on Earth humans.  From a 4D, fourth dimension, perspective - time does not exist.

In addition, this area of fourth dimensional space also has a 'black hole' with highly charged magnetic energies at its core. Earth's solar system and planet Earth will upon entry of this zone encounter the highly charged magnetic energies of this 'black hole' and feel its effects.  Some of your Earth scientists, astrophysicists, call this area you are entering - an interstellar energy cloud, Galactic or Torsion Energy Wave.

The  speeding  up  of  your  solar  system &  its planets including Earth due to the faster & higher frequency energy vibration rate of this area -  their upliftment into the fourth density resulting in continued geophysical events and additional changes to planet Earth - these changes were projected to start by mid-October 2011.

A matter of importance.

As you are well aware, 2017 was a year full of incredible challenges, changes, arson fires in California set by beings with an agenda, continued staged 'false flag' shootings around the country [ie. Las Vegas], internal & media political strife due to the choices of President Trump, disclosure of very sick people at the very top of the Hollywood power structure... and more.

I expect what you will see coming in 2018 is the open disclosure of additional very sick, manipulative people/beings at the top of the political, religious, media and corporate global elites not only in the United States... but around the world.  This is a very good thing.  They have been hiding in the shadows for far too long;

You could also think of this time as, to use an old saying, "...its always darkest before the dawn."

Please also remember, the complete transition, and higher density/dimensional transformation of this solar system, inclusive of planet Earth, is primarily a cosmic evolutionary happening, according to the evolutionary blueprint of planet Earth... as well that moment when 3D human consciousness & awareness reaches its highest potential.

The higher dimensional, transformational shift, of this world, as I have said many times,  is not  based on any particular time or date.  It is simply about the evolution of this solar system inclusive of this planet.   And of course, whatever number of people choose to awaken... and participate in this positive change,  evolutionary process.

The moment of transformation is expected to occur when the greatest number of cosmic events affecting planet Earth ['earth changes'] happens during this era, concurrent with the level of human sentient consciousness & awareness of spiritual life reaches its highest potential apex...  reaches its peak.

This will happen,  this moment of change to 4D will occur, literally, as  fast  as, in  the  'blink of an eye'.   This change to 4D life will be instantaneous.  There will also be some pockets of 5D, fifth dimensional, vibration, on your new 4D Earth.  But be assured, it will be an even more colorful, far more beautiful reborn place to live as a 4D or 5D world.

This link works at the response bottom area...Click on that link there, I tried and it worked...It takes you to the video...

THE UNDERGROUND WAR IS HAPPENING NOW!!!! "I thought I’d tell you this that as of October 8th, my friend and I have saw what appears to be some kind of UFO. The craft make no sound and seem to just ‘park’ themselves above us staying in place. This always occurs at night. They are in the…" Solar Rays Of The Beginning By Natalie Glasson &Helios & Vesta  Greetings, we are Helios and Vesta. We are one soul and yet we express ourselves as a masculine energy and a feminine energy. We are the overseers of the Solar Level of the Creator’s…
See More