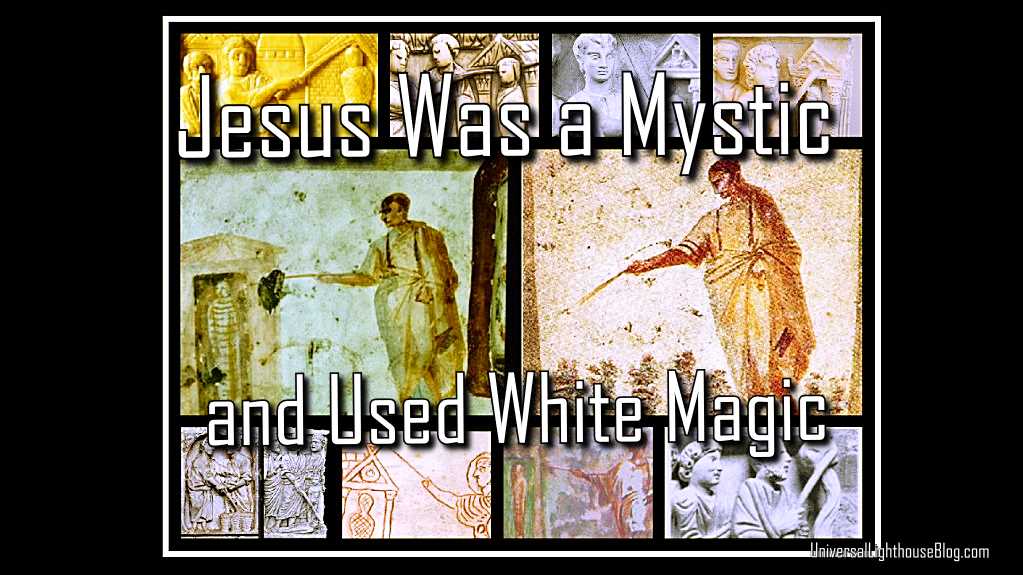 Jesus Was a Mystic and Used White Magic

Today I am being Guided By Christos to expose the Truth of his Time as a Human on this Planet.

The Truth about The one we know as Jesus has been manipulated and distorted from every angle. From the controversy about what his Name actually was, to how he actually Looked, The ones who wish for control, have worked very hard to keep him a mystery. But there is a very big secret that is kept due to how powerful the information is. If you have studied any of the ancient writings besides the Bible you can understand that Jesus, during his supposed Lost years, actually Traveled the world and studied many ancient beliefs and techniques that are considered Taboo and against the Church Today. He would have learned many different techniques through his travels through the Asian, Indian, Egyptian, and African cultures. Some of those Traditions would have been, Mystic Judaism, The Ancient Egyptian Religion and Mystery Schools, Ancient Hinduism and the Vedic Sanskrit, Ancient Buddhism, The Ancient Reiki practices, Ancient Qigong, Meditation, and Ancient Traditional Medicine and Shamanic practices of the Tribes, which in itself is considered witchcraft in the Modern Church of today. All of These ancient practices are what would be considered to be White Magic because They would have all been the Masters of the Moving of Light Energies. The combination of all these practices Is what made Jesus Godlike in the eyes of man.

Jesus then brought all these Ideas back to Israel, where he performed the Great Miracles, which we have all heard about.

Some of the most powerful Miracles were, turning Water into Wine, He Fed 4000 People with 3 Loaves of bread and 2 fish, He performed exorcisms of the demon-possessed, he Healed the Sick, and Blind, and raised many from the Dead. These Miracles were so powerful that people begin carving and painting images of Jesus performing these magnificent feats. In the Ancient Carvings and Paintings, you can see that Jesus looks Nothing Like what we have been shown. He is very Roman looking, with short hair and no beard. He is also wearing a tunic that was only worn by very important people of the Roman era. Plus Most important, he is holding what we would consider today, as a Magic Wand. These are some of the oldest images known of Jesus. In all modern paintings, we see the image of Jesus that the ones who wished for control wanted us to see. All of Jesus' Miracles were performed by using what is referred to as White Magic. He would have been considered a Mystic due to his Teachings and would have used a wand and even Crystals to project the White Light Energies, for his healing and the raising of the Dead practices. He would have learned the technique of Raising people from the Dead through the Ancient Egyptian Religion.

The church has hidden many things about Jesus' Life. They did not want his followers to have the same gifts as he did so they blinded them to Truth, and totally made what Jesus actually did, an abomination to the Church and God. After 2000 years of this they have now Brainwashed the masses into Believing that All Magic is evil when it is quite the opposite. White Magic is the only way to remove The Dark Magic that inflicts this World. It can not be done with just Prayer, and through Jesus' Name and hoping he will remove it. It can only be removed by cleansing it through White Magic Work. White Magic Work is the ability to move Light Energies where you wish them to go and to Null Dark energy that has been placed for harm and manipulation. Even Thoth Claimed within the Emerald Tablets, That The only way to remove the Dark's Black Magic against Humanity, is through White Magic, Which would have been some of the same teachings as Jesus.

Jesus was a White Magician, but he did not perform Tricks. He was a true Wizard and Mystic of the Craft. And he taught his techniques to his Followers. This is what scared those who wished to control, and the main reason why they Killed him. They were afraid of Humans learning that they could Stop The Dark Magic that is being used against Humanity. In today's age, the church is the one who is supposed to be the opposer against the darkness. However, They became the Darkness when they Denied the truth of who Jesus actually was, and what he actually did. Part of the Awakening is waking up to the deception and lies we have been told for centuries. This Earth and Humanity have been the Darks playground. They have hidden the real truth of the power that resides within us. Jesus' true Teachings would have been about how to Remove all Darkness. He would have taught his practices to his closest followers. They too would have possessed the power to perform these Magnificent Miracles of Magic, and so do we. The big Secret of Magic is that it is the Key to our Quantum Reality. The Dark ones know this and have used their Dark Magic against us for thousands of years. Now we are remembering the Magic that comes from within us, Though the White Light of the Infinite Creator.

in so much Love and Light,

Chellea, Mystic and channel of the Aeons Sophia and Christos, and the Karistus. The New Earth of Light Full Disclosure, Channeling and Gnostic Guidance. @ UniversalLighthouseBlog.com

Part 7 The Karistus - The Ones Known as the ANGELS https://www.universallighthouseblog.com/post/the-karistus-the-ones-known-as-the-angels-the-extraterrestrial-interference

Part 9 Putin Said, They are “NOT EVEN HUMAN”

Yeah, I see the mockery for 'wokesters', but God's fairness in the issue is clear. God created pple with varying…"
More…
Loading ...