Independence Day 2015 (July 4th): Is the USA Still the Land of the Free and Home of the Brave? 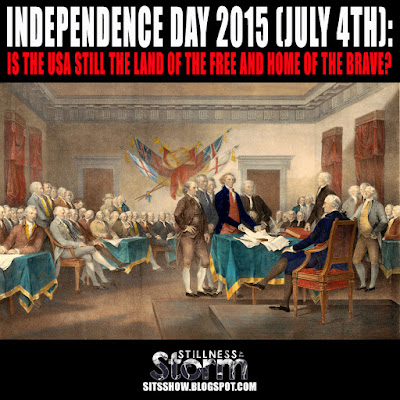 This is a great post for this day of so called 'independence'. We are living on a world where appearances are everything, where substance, the things that actually determine what a thing is, are largely forgotten.  The pronouncements of our would-be masters, the rhetoric which obfuscates the truth from the eyes of the masses, can only last so long, and must be infused with constant distractions; bread and circus. Thankfully, there is a growing body of awakening individuals, willing to look past this glossy exterior that enshrouds all aspects of life.  Related Criminals Impersonating Public Officers | The People MUST Stand Up And Take Down Illegitimate Government The truth about the United States, its fall into de facto rule of aristocratic agencies who service a hidden elite, can not remain long hidden. On this day of empty patriotism, take solace in knowing that when a tyrannical leader must constantly reinforce the socially acceptable beliefs, it has already lost the people they presume to be masters of.

One day we will have a new celebration of independence, and it will mean more than all the fanfare and fireworks displays of the past combined.
- Justin
Source - Energy Fanatics
(OmniThought.org) In the USA, many Americans are getting ready to celebrate Independence Day or July Fourth with fireworks, parades, concerts, family gatherings, beers, and barbecues. Many Americans know that on July 4, 1776 representatives of the 13 colonies got together and adopted the Declaration of Independence, and therefore declaring independence from Great Britain.
The Declaration of Independence (1776) gave the 13 colonies the legal right to claim that they were independent states and no longer under British rule, which was not totally true. As for The Constitution (ratified in 1789), it was the document that gave specific details about the political and court system of The United States of America and the rights of the People.

Did You Know that the Organic Constitution for the USA was Replaced by a Corporate Version?

The Republic for the USA still exists but it exists like an old empty house filled with dust and cobweb. This is because nearly every American has been tricked into agreeing to join the corporate version of the USA. This trickery was achieved through the birth certificate and the U.S. Citizenship contract.
Here is an excerpt from my book Staradigm about the birth certificate. If you want to know more about how the legal system works and how the birth certificate is used to enslave you, I recommend getting a copy of the second edition of Staradigm and read chapter 8. Be advised that the first edition does not have chapter 8.