Please view this video, as it may sway your opinions to remain with the EU, in the forthcoming referendum, when digested in full...It is a long video, but worth the effort....

This should also help the undecided workers among you, to make their minds up...

If you are definitely voting to LEAVE, then you won't need convincing, though will still find this video interesting.

The EU is actually a neo-liberal pro-corporatist project and is stealthfully designed to remove workers rights, contrary to what you may have been told by your leader, Jeremy Corbyn.........Does Corbyn know, for example, that the REMAIN camp is funded by Goldman Sachs, JP Morgan and Morgan Stanley; a terrible trio of major banking concerns...?? Maybe ask him why he is associated with such notorious bedfellows, as a proponent of remain..???

All the elites of the globalist agenda, seek for the UK to remain in the EU....Does that suggest something to you, as a working class person...?? Do not be fooled by the hype and propaganda from the REMAINDERS.......Better to LEAVE the Euro-project building block, of a corporate takeover of all national governments...Better to be free, in a democratically accountable system.

Corbyn wants to re-nationalise the railways...He won't be allowed to under EU law.....No socialist programme will be allowed in the EU...Only lip service is paid to socialism...Look at France.

Questions should be asked of the true nature of this European Union, that it is actually a capitalist tiger, dressed in "socialist" clothing...

Thank you for reading,

hope lefties wake up soon.......global elites have fooled them completely..

Useful idiots among the "millennial" generation, seem to be so brainwashed by the elites and big banks, who support the EU, that they see "no future" within a free and sovereign nation state....

Truly twisted in their reasoning skills...

My own daughter, who is 19-years old, fell out with her best friend, over the results of this referendum, both being on the opposing sides...My daughter's friend being rather similar to the girl in the vid, in her blindness and liberal sentiments for being controlled by a European super-state.....Reminds me of the book, 1984, in which the Ministry of Truth reverses all words, to mean the opposite...Slavery is freedom, peace is war, etc...

The "millennial" generation seem to be confused about Brexit, in their mad zeal to support the EU super-state...See this vid by Watson, presenting the inanities of some, if not all, millennials...My own daughter is of this generation and completely supports Brexit...But it seems that many do not and are brainwashed by the banks, corporates and elites, to do their bidding...

Tony Bliar will be under the public spotlight again, mid week, as the Iraq Chilcot report is presented to the full light of publicity...War criminal Bliar really does need to be impeached, on the grounds of crimes against humanity and public safety.....

Hard to believe that this vulgar politician was once head of the British Labour movement.....He corrupted that party into "New Labour," to reflect his secret ambitions to end socialism and replace it with corporate domination of all workers, while pretending to be with the masses of people...

Following my attempts to mobilise the Labour movement, to vote for Brexit, it looks as if said movement is imploding, into leadership squabbles between Corbyn grass roots and the Blairite MPs...

They even rolled out the odious Tony Bliar himself, to tell the government that they could ignore the referendum result, and remain in the EU, as big business might prefer that... LOL...The man is an utter piece of trash and has not an ounce of democratic commitment to voters..

I'm certainly no Tory, YET at least they had the good grace to offer and stand by the referendum...The "Labour" movement are too busy getting funded by Goldman Sachs, it seems...

See this vid, about the plans to create a EU super-state, secretly formulated and rolled out in steps and with politicians conspiring to keep voters ignorant....The EU was formulated in 1942, by the Nazis... 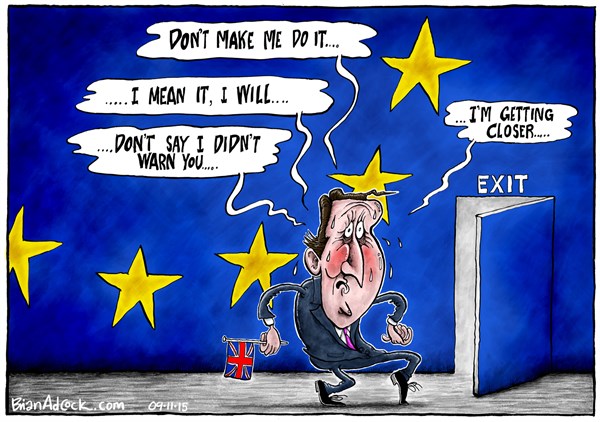 This time the EU want to resolve the whole matter speedily and avoid continued effects upon their economies, in the Euro-zone, which is particularly fragile, as per the Italian banks, etc...So they have been asking for immediate invocation of article 50 of the Lisbon treaty...In the UK, it is the government who want to take their time, now suggesting that the leadership election may be resolved by early September, rather than October, at least...Cameron will not invoke the article and wants his successor to do so...so they will be having a leadership election, within the Tory party ranks, with a Brexiteer being favoured....Maybe it will be Johnson, but at this stage, nobody knows...

In spite of the inane comments made by the Euro-fanatics, such as Kenneth Clarke, there will be no second referendum, nor a Parliament that will ignore the mandate of the referendum's demands to LEAVE THE EU...It, will be made official, I'm certain...If not, it would be most unwise of the government and they cannot even obtain sweetners, if they get cold feet, as the EU have demanded IN or OUT, as I do....So no slightly in and slightly out, it's OUT and OUT it must be....

yeah Drekx, like they let the Irish people vote twice for the "EU-Constitution" :)

Contrary to what the media may be suggesting, there is absolutely no way that the results of the BREXIT can be reversed by either the hot-headed Nikola Sturgion, of the SNP, or the on-line petition of the disgruntled...It will not happen, so they may as well give up...Several constitutional experts have confirmed it...No repeat referendum, until they get the result to favour the EU...No way...Not happening..Mark my words..

Mike Indovina VI commented on the blog post 'AN EYE=OPENING INTERVIEW EXPOSING BIG PHARMA (VIDEO)'
"god. it’s sickening. why are so many blindly and blatantly ignoring this?? hmm maybe…"
53 minutes ago