House Speaker Nancy Pelosi (D-Calif.) and Rep. Jamie Raskin (D-Md.) announced a bill to create a “Commission on Presidential Capacity to Discharge the Powers and Duties of Office” that would possibly attempt to invoke the 25th Amendment of the Constitution to enable Congress to “help ensure effective and uninterrupted leadership in the highest office in the Executive Branch of government.”

Earlier on Thursday, Pelosi said Democrats were planning to discuss the 25th Amendment, but she did not elaborate. At the same time, she called on President Donald Trump, who tested positive for the CCP virus, to reveal his latest test results.

“I think that the public needs to know the health condition of the president,” Pelosi said in a news conference. “Before he got the virus and admitted to it, when was his last negative test?”

According to the Constitution, Section 4 of the 25th Amendment allows Congress to come up with a body to declare whether a president is “unable to discharge the powers and duties of his office.”

“In emergency situations, Congress could pass a concurrent resolution requiring the Commission to examine the President, determine his/her ability to execute the powers and duties of the office, and report its findings to Congress. If presidential incapacity exists, the Vice President would immediately assume the role of Acting President,” said Raskin’s office in a news release.

Raskin, without providing a reason, claimed that the “25th Amendment was adopted 50 years ago, but Congress has never set up the body it calls for to determine presidential fitness in the event of physical or psychological incapacity,” while adding, “Now is the time to do it.” 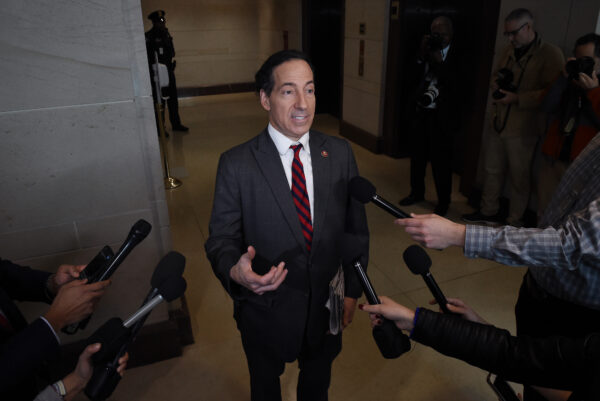 Rep. Jamie Raskin (D-Md.) speaks with reporters after witnesses failed to arrive for testimony before the House Intelligence, Foreign Affairs, and Oversight committees at the U.S. Capitol in Washington on Nov. 5, 2019. (Olivier Douliery/AFP via Getty Images)

The move, along with Pelosi’s comments, represents an escalation in Democrats’ rhetoric that the 25th Amendment needs to be involved because Trump is incapable of leading. The long-shot move may also be designed to raise doubts about Trump’s leadership with just weeks to go before the Nov. 3 election or an attempt to derail the Senate confirmation hearing for Amy Coney Barrett to the Supreme Court, scheduled for later in October.

In response, the president wrote on Twitter: “Crazy Nancy is the one who should be under observation. They don’t call her Crazy for nothing!” He is referring to Pelosi.

“Additionally, each party selects a retired statesperson (e.g., former Presidents, Vice Presidents, Attorneys and Surgeons General, Secretaries of State, Defense, and Treasury) to serve. The 10 appointed members then select an 11th member, who acts as the Chair of the Commission,” it said.

The 25th Amendment of the Constitution stipulates presidential succession. However, Democrats during Trump’s term in office have frequently suggested that Section 4 of the amendment should be invoked, which involves involuntary measures to declare the president incapacitated.

“Whenever the Vice President and a majority of either the principal officers of the executive departments or of such other body as Congress may by law provide, transmit to the President pro tempore of the Senate and the Speaker of the House of Representatives their written declaration that the President is unable to discharge the powers and duties of his office, the Vice President shall immediately assume the powers and duties of the office as Acting President,” according to the section in the Constitution.

However, according to the Constitution, only Vice President Mike Pence can trigger the involuntary removal of Trump. If the president challenges Pence’s move, then he would have to gain the support of the majority of Trump’s cabinet as well as a supermajority in the House of Representatives and the Senate. Congress can also form a body approved “by law” to agree that “the President is unable to discharge the powers and duties of his office,” according to the Constitution.

Well now, I listened to the "Edge of Wonder" guys last night, and I know why 'Nance P.' is so very desperate. I would be too. It has to do with some very incriminating hard drives, that the Chinese are dangling over the Dems.

The whole thing about the 25th Amendment may not at all be about Potus. Think about it. The Dems believe they are winning the election. Who goes in and can't possibly be doing his job once he is in. We know he is just a place holder! So they have to prepare, to make sure someone else will take his place, and this has to happen smoothly! Therefore, they are doing all they can to push this through.

rev.joshua skirvin liked amparo alvarez's blog post MIKE QUINSEY'S HIGHER SELF -"As we have often done in the past we have given you a glimpse of your future. All will come in good time but first, so to say, you must put your own house in order...
3 hours ago

rev.joshua skirvin commented on the blog post 'Explicit Photos of Minor in Hunter Biden’s Laptop Were of a Relative — He Was in Some of the Photos WITH HER 10/21/2020 By Stillness in the Storm'
"Sorry, the nano bots are after me again, heres the rest of the posts. Giuliani said that Biden,…"
8 hours ago

Krishna Kalki replied to the discussion 'Bombshell: Covid-19 Isn’t a Pandemic Plan, it’s an Extermination Plan for Humanity...THEIR PLAN...BUT THERE IS A HIGHER PLAN'
"Form Communities and cut off from your corrupt governments "
16 hours ago